Located near the mouth of the Royal River, Lanes Island in Yarmouth has drawn visitors to its sandy shores for centuries.

Lanes Island is great for:

MCHT, along with partners including the Maine Geologic Survey, installed a Living Shoreline Erosion Control Demonstration on the southwest facing shoreline of Lanes Island.  The demonstration site was installed in 2020, with the intention of monitoring the site for five years.  Learn more: Slowing Erosion the Natural Way at Lanes Island

Lanes Island is easily accessible at mid-to-high tides from Freeport’s Winslow Park or the Town of Yarmouth’s Royal River boat launch. There is a fee for parking and use of ramps at both facilities, and be sure to check the tides before visiting – or you could find yourself stuck, or dragging a kayak through the mud! Also, note that the shallow, south-facing cove drains completely at low tide, despite what nautical charts indicate.

The two best landing sites are a small, gravelly beach near the northern end of the southeastern shoreline, and the western sandy beach closest to the mouth of the river. Of these, only the former is accessible at all tides – though at low tide, the water is still only a few feet deep. 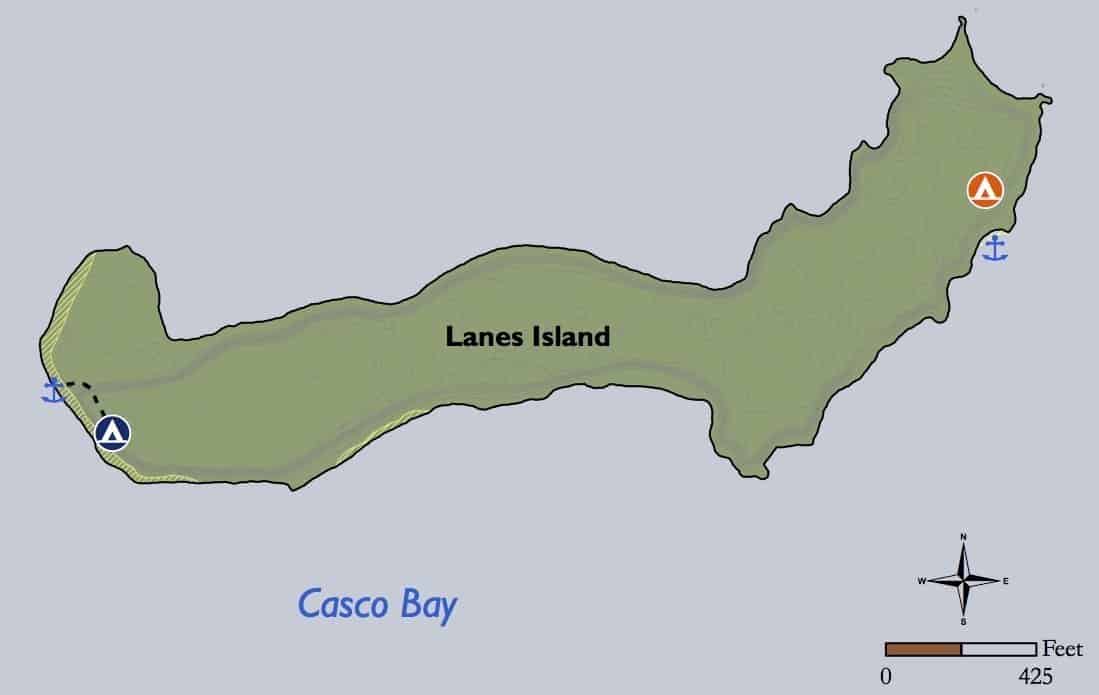 Please be aware and avoid poison ivy and invasive fire ants found outside of established campsites.

Lanes is important to local shellfish harvesters, who stage gear and await the right tides on the island while harvesting the important clam flats surrounding it. A note to visitors with dogs: please be especially scrupulous cleaning up after your dog, since waste seriously threatens the health of these flats and the livelihoods of harvesters!

Many have walked here before

Lanes Island has an important cultural history. The island was used by Abenaki people during pre-settlement times, and was also farmed by European settlers beginning in the mid-17th century (including James Lane, for whom the island was named). If you encounter any cultural relics, please do not tamper with them.

The 28-acre Lanes Island Preserve lies just east of the mouth of the Royal River in Yarmouth. The island features a few stretches of sand beach and fringing salt marsh, and is nearly surrounded by mud flat at low tide. Steep, eroding embankments characterize much of the island’s shoreline.

Lanes Island was generously donated to MCHT in 2013. After spending decades acquiring shares of the island and uniting it under single ownership, the island’s previous owners wished to see it permanently conserved for public enjoyment and wildlife habitat.