You Had Me at Snow Fleas…

And then, seemingly overnight, everything changed. Suddenly, the ice did not crack when I waddled (my regular walking gait) onto it. Suddenly, there were no bare patches of grass to be found, just a wide-open expanse of deep snow. Yes, the winter that was previously MIA in St. George had finally showed up in the form of ice on January 30 and snow on February 1, just like we knew it would. Thank you, earth’s tilted axis!

But it didn’t matter—we got snow!

The snow was a wet one, and snowshoeing became a lesson in “de-glaciating” crampons—those teethy things on the bottom of modern snowshoes. But it didn’t matter, because we got snow! Snow so deep that slightly weighted critters had a hard time maneuvering through or over it. Snow so deep, and air so cold, critters were inspired to take a night or two off and hunker down until conditions “improved.” 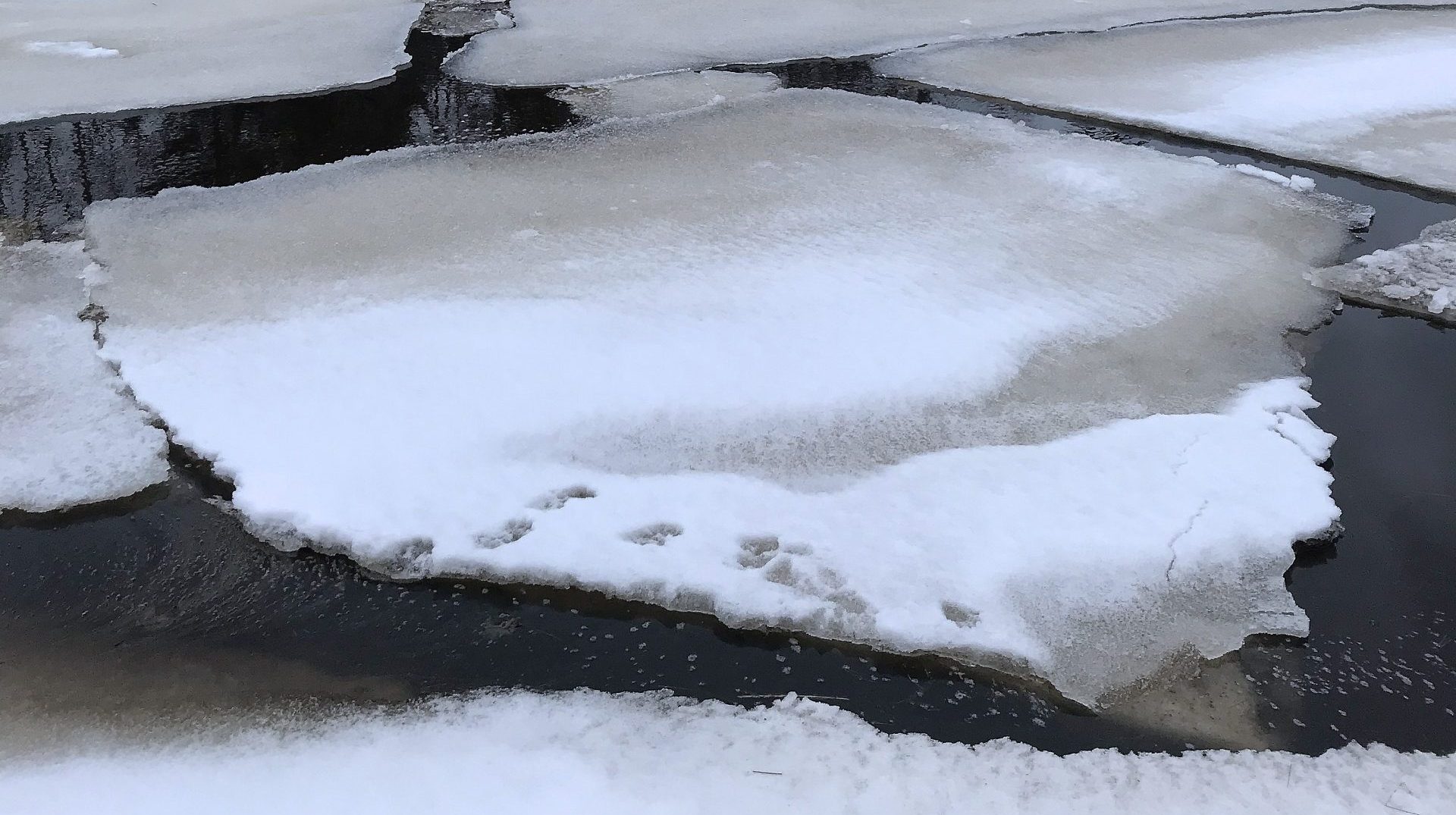 Otter tracks in the snow

So, with hardly a track or trail to follow in the aftermath, I got to wondering—did the critters take to the trees?  But it didn’t matter, because the marsh iced up, which meant Leif (my son) and I could walk to the end of the marsh and back without fear of our boots filling with the stankiest, coldest, non-frozen water possible. No, these were the good times!

Even rains (yes, the day warmed up a bit) didn’t dampen the hope that the snow carried with it. Maybe the precipitation would tamper down the snow to a level more conducive to animal comfort and wandering. Maybe the rains would create a clean canvas to capture the tracks and trail artwork that foxes, fishers, coyote, and bobcats left behind—in a perfect world. Maybe, just maybe, it’s okay to dream every once and a while.

The crusty, ice-covered snow conditions that resulted were more likely, but it’s okay to have your dreams crushed (or crusted) occasionally, right? It was the kind of snow that makes my knees hyper-extend from ten feet away. An icy crust that crunches loudly with each step of my size 14 extra toughs. Walks in these conditions are by far the loudest I will take all year. It’s awkward walking, but so often walking is.

The icy crust lowered my expectations of finding fresh animal tracks, though older tracks and trails were still present (the canvas it turned out had not been fully cleaned). But the crunching sounds lowered my expectations of seeing any critters at all and made me wonder where all the deaf/hearing-impaired animals spend their winters. Anyway, with this all in mind, I decided to make a long awaited sojourn to see if I could learn a bit about the River Otters of Meadowbrook Preserve in St. George.

The Meadowbrook preserve comes complete with a nice (maybe) half mile meandering loop trail that cuts through the woods with views of the meadow brook itself. MCHT helped procure the preserve, which is owned and stewarded by the Georges River Land Trust and the Town of St George. I have found the preserve to be full of treasures waiting to be discovered.

Not too long ago I came across an otter latrine along the brook. I’ve been waiting to return once there was enough snow to hold clues as to what the otters were up to. Well, this was the day.

The snow in the woods was crusty, but the warmer weather muted my steps, and my knees maintained a consistent level of non-pain. The walk was off to a good start—the simple things. About forty steps onto the trail and I could have called it a day right then—because what I found was snow covered with snow fleas. Maybe these were the deaf/hearing impaired animals I was hoping for. 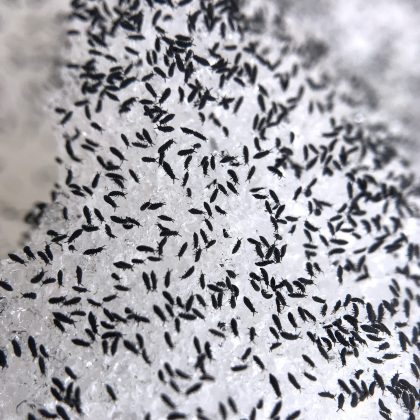 The snow flea (Achorutes nivicolus) is, of course, a springtail within the primitive order of insects known as Collembola. They can be seen hopping (or springing) around on the snow on warm days, taking advantage of microclimates as they migrate from one opening in the snow to the next, feasting on micro detritus—likepollen and mold—that we can’t see (and kinda don’t want to really). I’ve always been a fan of snow fleas (born that way) and  after anticipating zero live animal sightings, finding gagillions of snow fleas, well, that made my day!

But of course, there was more. As I made my way to the otter latrine, I crossed deer and snowshoe hare trails—neither of which the crust was strong enough to support—and came across a bounding trail. Even though the tracks weren’t defined, from size and distance it was clear that a fisher had made its way through the preserve. I love tracks and I love snow fleas, and to find them together—snow fleas in tracks—well, that’s close to bliss.

This was turning out to be the best hike I would take at that exact moment, and that is saying something!

Backtracking the fisher trail took me to the brook of meadows, where the ice and the crust were thicker and the fisher was able to walk across the crust leaving just the slightest imprints of tracks, which of course now had snow fleas in them as well! This was turning out to be the best hike I would take at that exact moment, and that is saying something! Not sure what…

I lost the trail, as the ice had shifted and wind had blown loose snow over it (nice excuse), so I followed the brook hoping to pick up where the fisher trail continued. I took about ten steps before noticing a set of larger tracks that appeared to come out of cracks between the ice chunks over the brook—the otter tracks of my dreams.

Otter tracking is easy, or at least I like to tell myself that. And sure enough, the double trail left behind by a pair of otters, marked a latrine—a new one for me, very exciting. And of course, this scene too was full of snow fleas.

Now, I’m not going to dwell on the spraint scene at this latrine, but let’s just say it was a healthy amount to come from two otters. These two are not starving. In an effort to get photos of snow fleas on spraint, “spraint fleas,” I noticed that there were numerous eel skeletons within the spraint, which is standard for spraint on the peninsula. These skeletons still had meat on them—all 10 or so of them did—which is not standard. Usually, the skeletons are clean and meatless. You know, fully digested. Is this otter sick? Does it have a funky digestive system? Is this a temporary thing? I’ll continue to go back and inspect…. 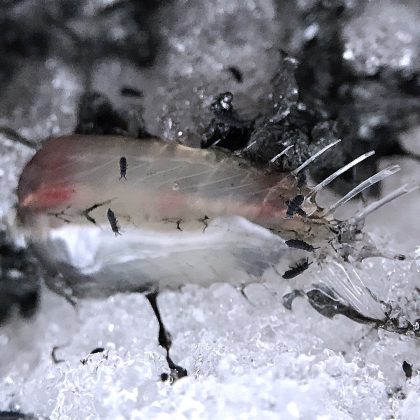 I followed the brook a little further to the latrine I originally visited. The brook itself must have been low, and the space under the ice must have thinned, because the trails showed that the otters had left the brook waters for the rest of the way. Full of belly slides and bounds, the trails headed up and back down the brook, a sign that the pair had spent a night somewhere up ahead and weren’t there now.

Before long I was at an old beaver pond, where the trails led directly to an old beaver lodge. Just like that, I was knocking (not literally) at the otters’ overnight accommodations. It was so easy it was sick, the kind of sick I was hoping for that day.

In the never-ending pursuit of “getting to know my neighbors,” tracks and trails in snow are an ultimate resource.  Sometimes you must fight the urge to stop and smell the snow fleas and instead see where the trails take you. To somebody’s home, to somebody’s kill, to somebody’s poop spot. All are important finds, although some more pleasant than others. I was very pleased that day.