The trick for most, if not all, nature observation comes down to tracking, as in tracking down a critter.

If you hear a Northern Parula sing and follow the song to the singer on its perch, you’re tracking. If you follow the hyper-active flight path of a butterfly’s shadow until it lands, you’re tracking. Or if you are on a boat and “smell the snarge” (as the cool kids say) and turn to see a Minke Whale swim by—you are tracking.

Simply put, using signs like sight, sound, and smell to spot a critter is tracking. Heck, even flower-watchers (aka Botanists) are trackers. These examples are what I would refer to as “active” tracking. The signs in active tracking are so fresh that they bring you to the critter in the flesh. “You can observe a lot just by watching,” says Yogi Berra—and I would also add by smelling and listening!

Tracking also can mean something slightly different when observing nature. Many naturalists and nature lovers that I know think of tracking (or the art of tracking) as using past signs as tracking tools. Many folks associate tracking with finding an animal footprint or following tracks left behind. You can learn a lot from an animal highway that’s been used by many species over many months, or from an old river otter latrine that’s so entrenched in spraint (poop) that the lessons about the local population are thick and, in total honesty, somewhat nasty (judgment). There are many lessons to be learned from past signs—or non-active tracking (creative, huh?). 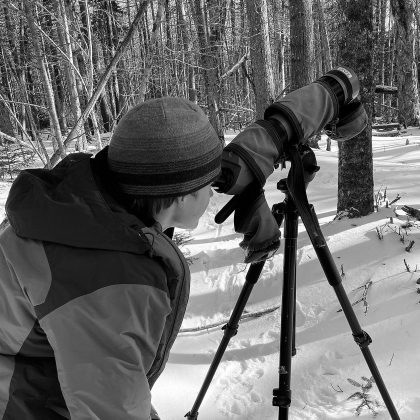 When I track in the non-active sense I go to learn, not necessarily to find the critter. I mean, I have seen river otters while tracking them—and have been growled at twice while standing above their dens—but I never go out expecting to see an otter. And most of the time I’m tracking nocturnal animals anyway, so the lessons I learn are about animals I seldom see. Living in the past, as they say.

I have seen river otters while tracking them—and have been growled at twice while standing above their dens.

And then we have the case of the North American Porcupine (Erethizon dorsatum). Tracking porcupine is the same as tracking any other mammal, except if you look up every now and then you are likely to see it. The critter you are tracking, the critter that left the signs you’ve been following suddenly, magically appears. Those are wonderful times. Porcupines connect the past with the present, especially when the present is rarely considered very active. Yes, porcupines are cool and they know how to chill.

Top 8 Porcupine Signs (for me)

Question: What’s the first thing you spot when tracking Porcupines?

One of the most obvious signs that a porcupine has recently visited an area is “twig clippings” (porcu-sign #1) below a tree. Porcupines eat a lot of coniferous foliage and will often drop clippings of twigs they’re nibbling on before they even finish eating the needles. These clippings are often found with accompanying porcupine scats (porcu-sign #2)—the oval nuggets of the turd world. Resources say a porcupine will release 70-200 scats a day (I don’t want to know how this stat was determined). When you find twig clippings and fresh scats under a tree it’s a good time to look up—you might just see a porcupine looking back at yah. It’s also a good idea to keep your mouth closed when you look up… that’s on you though. 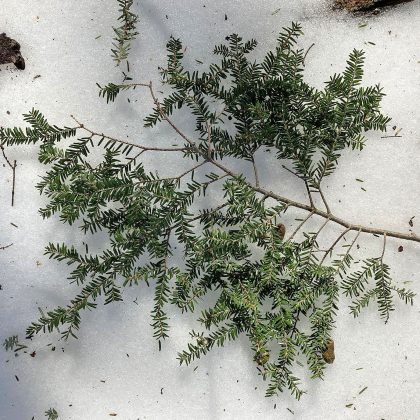 Other than the coniferous foliage (needles), North American Porcupines also feast on the cambium layer of trees in winter. Tree bark chews (porcu-sign #3), in my humble experience, are not usually the first (or second) sign spotted, but act as a complimentary sign giving lessons as to what the porcupine has been up to and where it has gone. The chews can be low to the ground, but are often towards the higher reaches of a tree. As opposed to beaver, porcupine do not down trees by cutting through the heartwood. Still, the chews can kill a tree if it girdles the bark. It’s not unheard of to find a graveyard of young trees within walking distance of a porcupine den—a scary, creepy scene if you are a tree.

Home ranges of Porcupines vary in size—up to 35 acres in summer and 12 acres in winter, and there will be a series of established trails throughout that area. Covered in quills for protection, porcupines are, for the most part, in no hurry most of the time. Their putzing around leaves a sign or two, so we’re going to say porcu-sign #4 are classic porcupine trails. While these well-traveled trails can be conspicuous year round, the braided trail pattern a porcupine leaves behind in the snow is priceless.

Porcupine accommodations may also be under rocky ledges or in old quarrying debris piles and can be fun to find. Scat (porcu-sign #2) is often in great supply at frequently used dens, sometimes in disturbing (judgment) quantities. Here’s a good quote on the subject, “Some dens become so choked with scat from successive winter denning that the animals must nearly tunnel their way through to get in or out” (Elbroch & Rinehart). Okay, just a reminder—porcupines are rodents, and rodents, unless they are your pets, tend to be pretty gross animals (judgment). Just saying. Porcupine ain’t no exception! 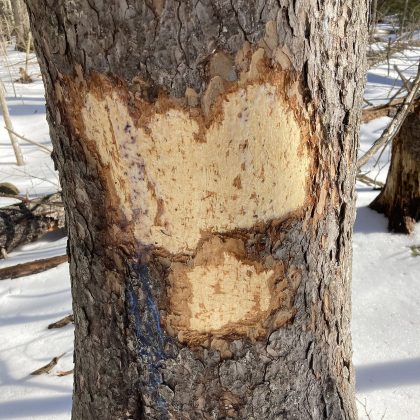 Beyond the scat, quills (porcu-sign #6) are another sign to be on the lookout for at dens and feeding areas. One hollow log at MCHT’s Erickson Field Preserve had been used as a den for years and would often have a handful of quills stuck in the wood surrounding the entry way.

Apparently when the porcupine backed out of its resting accommodations its quills got lodged into the wood, and then dislodged from its body. Last fall, many apples on Clark Island Preserve had porcupine teeth marks in them (as well as the random quill that got stuck in the apple while the sweet feast was happening)! While you don’t want to find them in your dog, for some reason finding quills always inspires an ‘awwww’ of appreciation and cuteness. It’s a barbed quill, be careful!

(Porcu-sign #7) is probably the rarest porcupine sign to find, and that is urine. Only twice have I found urine in snow under a resting porcupine, but it should be noted that only three times have I looked for urine in the snow under a porcupine. “Two out of three ain’t bad,” (Meat Loaf). At times, Porcupines can feel like continual scat machines, but when it comes to urine they are stingy. Which is fine, porcupine urine isn’t the highest priority in an effort to appreciate them. Maybe seeing it once or so to check it off your “porcu-sign life list” is enough. And then you can move on.

“Some dens become so choked with scat from successive winter denning that the animals must nearly tunnel their way through to get in or out.”

And (porcu-sign #8), last but not least, is… seeing the porcupine itself! Jumbo-sized prize!

No better sign of porcupine being around than seeing the round blob chilling on a limb in the breeze, marching around in a field, or moving between feeding areas. When there is little to fear (other than fishers) sneakiness is not a priority, and sightings aren’t particularly rare.

I spent two sessions recently (one solo and another after I snagged my kid to see) with a porcupine in a Hemlock the day after a 24-hour sleet and ice storm. The porker had a layer of ice in its quills, and a sizable ice chunk by his face—proof it had ridden the storm in the elements! An impressive happening when you consider that they are warm-blooded with an internal body temperature around 99 degrees, and don’t hibernate or even “hibernate on the hoof” by lowering their core temp to save energy. So, was the energy-cost to get back to its den through the ice and snow was too much? Was the hemlock such good eating it just couldn’t leave? Did it simply like the view? Or was this simply where it was going to spend winter? 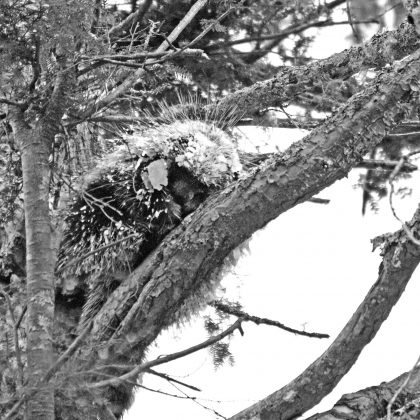 Whatever the case, this one just rode the storm out, burning fat storage that can be up to 50% of its body weight when winter starts. It’s the fourth porker I’ve seen wintering on the limb, so there must be a gagillion of ‘em out there doing this. And each one gets a tip of the hat for such a hardy (and chilly) undertaking, but not literally because my head would get too cold.

It’s a good idea to look at the ground while walking in Maine, especially in winter when trails are slippery. But if you come across any of the signs mentioned here while focusing on not falling, stop and take a look up. You might just see the jumbo-sized porcu-prize chilling on a limb. And that is always an ‘awwwwwww’ situation.

Hope to see you out there!