So begins my crash course in the birds of Maine. I’m conducting a point count survey of breeding birds: walking 0.1mi, pausing five minutes to listen, then repeating. I hear their songs differently than before. At first, they sound alien, with chirps and tweets turning into dial-up modems and sonar pings. By the end, I still don’t understand the birds, but I can distinguish species and individuals the same way that I can pick out the speakers of a foreign dialogue. Birdsong could be one’s third or fourth language, alongside the trees, the wind, and everything else that sustains us. 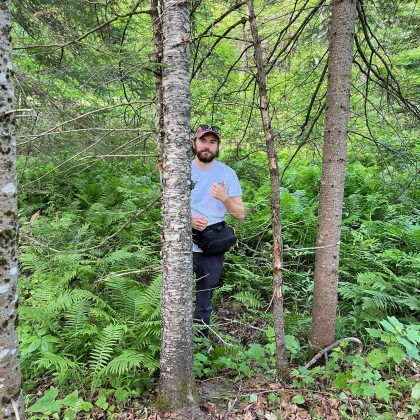 I started reading Braiding Sweetgrass by Robin Wall Kimmerer early this summer during some free time at MCHT’s intern training week. I stopped in my tracks when, hours after exchanging personal and professional origin stories founded on accomplishments and hard work, Kimmerer told an origin story of the land rooted in generosity. Weeks later, I read Kimmerer’s observations of water droplets on trees, on that day I was happy to be caught in the rain doing field work, slowing down to notice the dramatic drops from the striped maples, the steady pit-pit drips from the tamaracks, and the microcosmic beads clinging to the cedars whose logs I was lugging through the woods.

After reading Kimmerer’s take on honorably harvesting that which the natural world gives to us, I took an honest look at the trail work I was doing. Was I using natural resources responsibly? Taken literally, a bog bridge consists of 30 years of life, each growth ring giving strength to the planks. Beyond the direct exchange of life for materials, there are also overwhelming opportunity costs to consider: for example, each branch I trim is a branch where a bird can’t nest.

Even if I cut a few branches, the vireos, sparrows, and chickadees will still be around. Facilitating access to bird habitat might even awaken a future conservationist. An introduction to the land is all that’s needed, since most visitors will be just that: visitors, who don’t yet know how many languages they’re missing. We need to start somewhere, and learning a few words is better than learning none.

During my time in Rangeley, I have been lucky to encounter staff and citizens who are willing to teach me the language they know, but I have learned the most from my mornings with the birds. This is where stewardship makes the biggest difference: with honorable harvesting and respectful work, stewardship enables access to the land, the choirs of birds, and the cathedrals of pines. Access is foundational to healing our relationship with the land. If the harvest of a 30-year cedar or the trimming of a few branches is what it takes to connect decision-makers, activists, and open hearts to the land, it’s worth it.