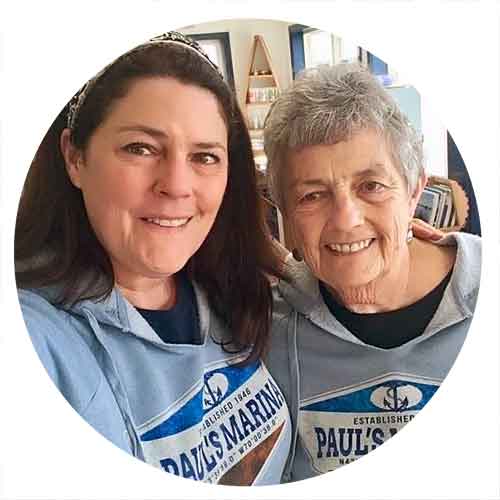 For those who work at Paul’s or are lucky enough to have a mooring there, this place is a home away from home. For those who boat around Casco Bay, it’s a kind of institution—known for the good people, sandwiches, and ice cream you’ll find at Judy’s General Store.

Judy Marsh’s father started the marina all those years ago, and she grew up visiting the islands of Casco Bay. Her fondness for these places inspired her and her family and the extended Paul’s Marina community to support the fundraising effort to conserve Whaleboat Island (in 2002) and The Goslings (in 2014).

This year, Judy, her daughter Helene Marsh Harrower, son-in-law Rob Harrower, and their team pulled out all the stops to raise money to help protect Little Whaleboat Island West and nearby Nate and Tuck islands. “Someone asked me, ‘Is Little Whaleboat for sale?’ and I said, ‘Yes it is, and do you want someone to buy it and build a house on it?’ They said ‘No, what are we going to do about it?’

Before I even had all of the details, I said, ‘Well, I think we’re going to have a fundraiser,’” says Judy.

About 400 people attended their 75th anniversary gathering under twinkle lights and a full moon, with tasty food and beverages and local music. “Every person we asked to buy a raffle ticket did,” says Helene. “Everyone wanted to give.”

In the end, hundreds of people from Casco Bay’s boating community gave a total of $50,000 through Paul’s Marina’s fundraising efforts—a staggering amount that helped make the effort to protect Little Whaleboat a success.