A “January to remember” is what they’re saying. And when I say “they,” I’m referring to ice skaters, and from the number of them on the ice behind my house lately, the conditions must be epic. Great to see so many people enjoying themselves on the solid water—the true bonus of winter in Maine (unless it’s on a road or sidewalk, then ice isn’t your friend.

I find skating to be like no other hobby, in that skaters feel comfortable approaching you and asking why you aren’t doing exactly what they’re doing. “Where are your skates?” is like a mantra for them—one I’ve heard a bunch this month for sure. I mean, I’ve never asked anyone, “where are your binoculars?” when I’ve been watching birds, or “where is your knife?” when I see people while I’m mushroom hunting. In a way, it’s as if skaters can’t fathom why someone would be on the ice if they’re not skating or ice fishing. I’m generalizing of course, and if you skate I am not talking about you. No, never. 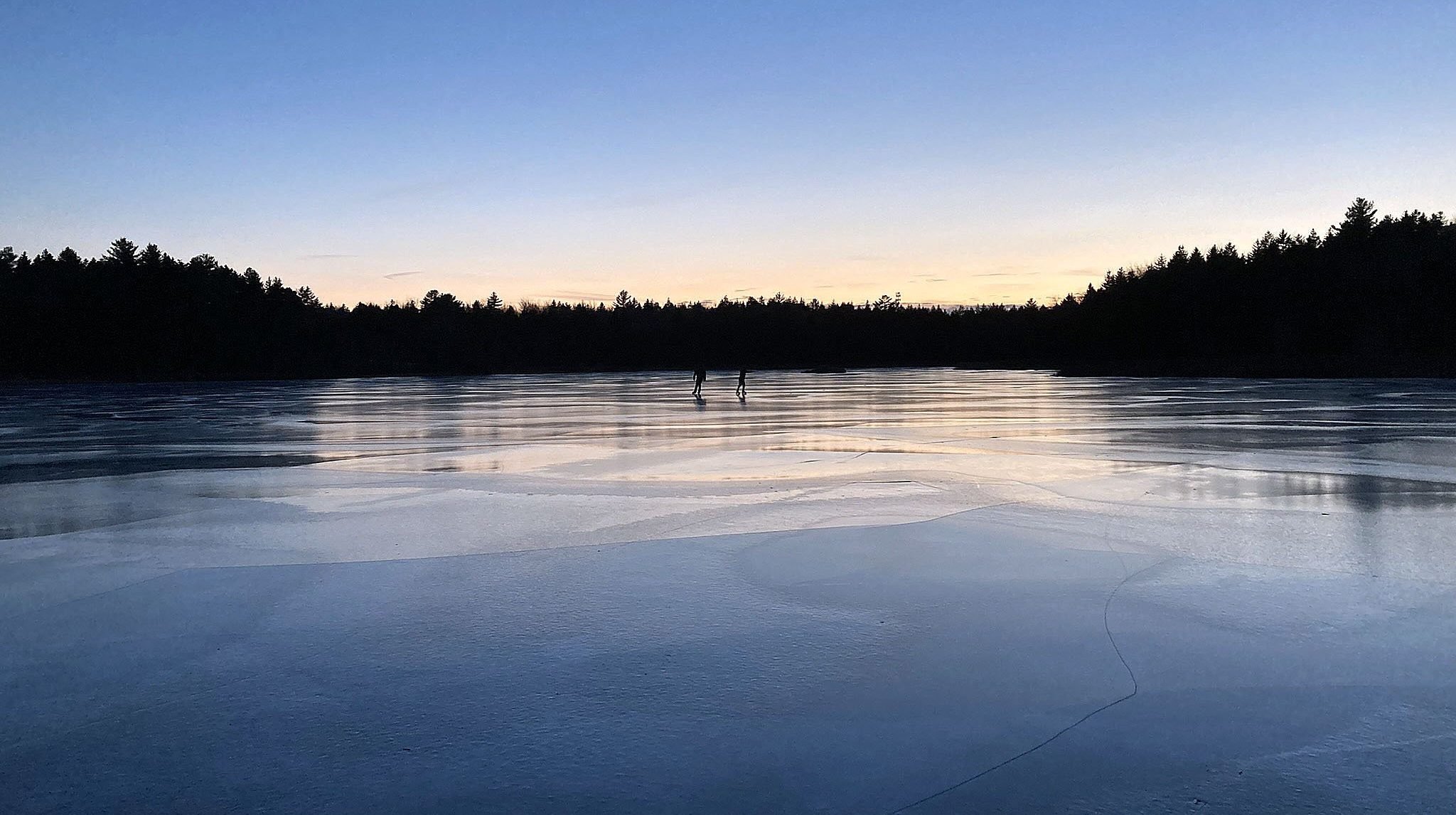 My default answer to the lack of skates question has been consistent: “Skating is dangerous and way too fast.” Kinda just rolls off the tongue! And the skaters response is always the same: “But I can get to end of the marsh and back in ten minutes!” I guess that’s an impressive time? My response: “What if I don’t want to go that fast?” This often inspires twisted smirks. Hey, don’t push your skating agenda on me!

Plenty of ice for everyone

The fact of the matter is, that when nature observing, all ice conditions (other than thin) are good to get out on. Be it snow covered or as smooth as a baby’s tushy (that’s a saying, right?), the ice always calls. I’ve been trudging onto the marsh ice behind my house for seven winters now. Usually it’s the snow on the ice that draws me out there. I don’t remember any other stretches of smooth, open ice days in the past seven years like we have seen this month. I suppose that confirms the greatness of this January’s skating conditions—where are my skates anyway?

I suppose that confirms the greatness of this January’s skating conditions—where are my skates anyway? 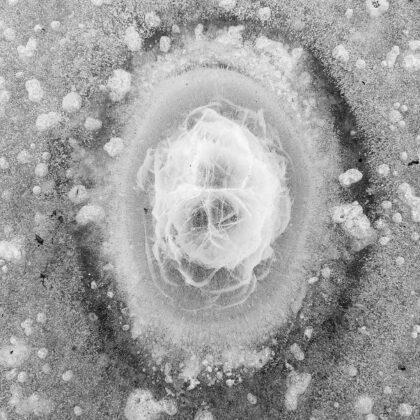 It isn’t the snow, so much, that gets me on the ice every chance I can, but rather the tracks and trails that the snow captures after critters criss cross over the marsh.

Snow in the woods is lovely, but it gets dripped on, often melts quickly and in general gets sloppy after a day or so. Tracks left in the snow on ice can last for days—albeit at times partially filled with wind-blown snow. The tracks can last so long one can watch them transition from snow to ice over time, making some pretty cool track art. Just look at this ice coyote track art photo. If I could be that creative! Maybe when I get older.

While I have no problem “sharing” the ice (which is good since it is not mine by any means), probably the biggest bonus of snow on ice is that, at least in my neck of the woods, fewer people venture out onto it. Sure you get the random cross country-ski trail, but the snow is largely non-treaded upon except by wildlife. Snow is apparently not very good to skate in, but I wouldn’t know as I don’t have skates. I’m guessing there will be no skaters for a while after the 21 inches we got in the last week. So it’s, “See you later, skater!”

Snow or not, there’s always plenty to see on the ice, and this month I found that the same conditions that made the ice so smooth and “skatey” offered a couple of opportunities that I hadn’t taken advantage of before.

With no tracks or trails to follow, the route of my ice walks meandered between river otter latrines and dens, beaver lodges, and openings in the ice. One opening in particular has been used by the local river otters for years and always seems to be the last spot on the marsh to freeze—in other words, it’s pretty darned cold when this spot freezes over. On a mid-January visit that’s exactly what I found (and felt in my toes). This freezing spell was unique (in my experience) in that the ice in the opening was crystal clear due to air bubbles and pockets.

Predacious diving beetle larvae worked their way through the other insects, clearing a path like a shark swimming through a school of fish.

I cruised over to look for any sign that the otters had used the opening before the freeze only to find the water beneath the ice was teaming with life. Insect life! Dozens of caddisfly larvae carrying their casing homes with them could be seen fuddling about while multiple backswimmers and mayfly larvae filled up the spaces in between. Predacious diving beetle larvae worked their way through the other insects, clearing a path like a shark swimming through a school of fish. I’d seen insects through the ice before, but one or two individual maybe. This was crazy, dense, and active.

The critters seemed to be holding onto the bottom of the ice as they moved. The critters were all bellies (ventral) up, which is an odd view—except for the backswimmers (they always show their bellies)—to see aquatic insects turn their helpful camouflage coloration upside down. I wonder if they could see me and what they thought of the bearded bald guy lurking over them through the ice. Maybe they couldn’t see me with their eyes facing down. Either way they didn’t seem to care about my presence, which did not offend me.

I had to get back to work (thanks, life!) and returned the next day for a status check on the insects. When I returned, not only were all the insects gone (without even a good-bye—still not offended), but more ice had frozen to the opening. The new ice had not frozen cleanly, however, and the result was a distorted view, like looking out an old window where the sand has settled at the bottom. Or like looking through ice—go figure!

A beaver popped up in the opening with a branch in its mouth!

I was feeling good about my timing with the insects the day before and was appreciating how fast things change, when I noticed that another opening in the ice was, well, open. It seemed a little odd, but it was significantly warmer than the day before and this opening was located next to a beaver lodge which, ta-da, the local beavers keep open. Or at least keep open on warmer days, since it was frozen the day before. Lo and behold while I was looking at the opening—from a distance (I didn’t feel like swimming that day)—a beaver popped up in the opening with a branch in its mouth!

Good timing again, and no tail slaps. This beaver was busy doing its thing, so I watched it reappear twice—mid-day no less!—and then walked along. 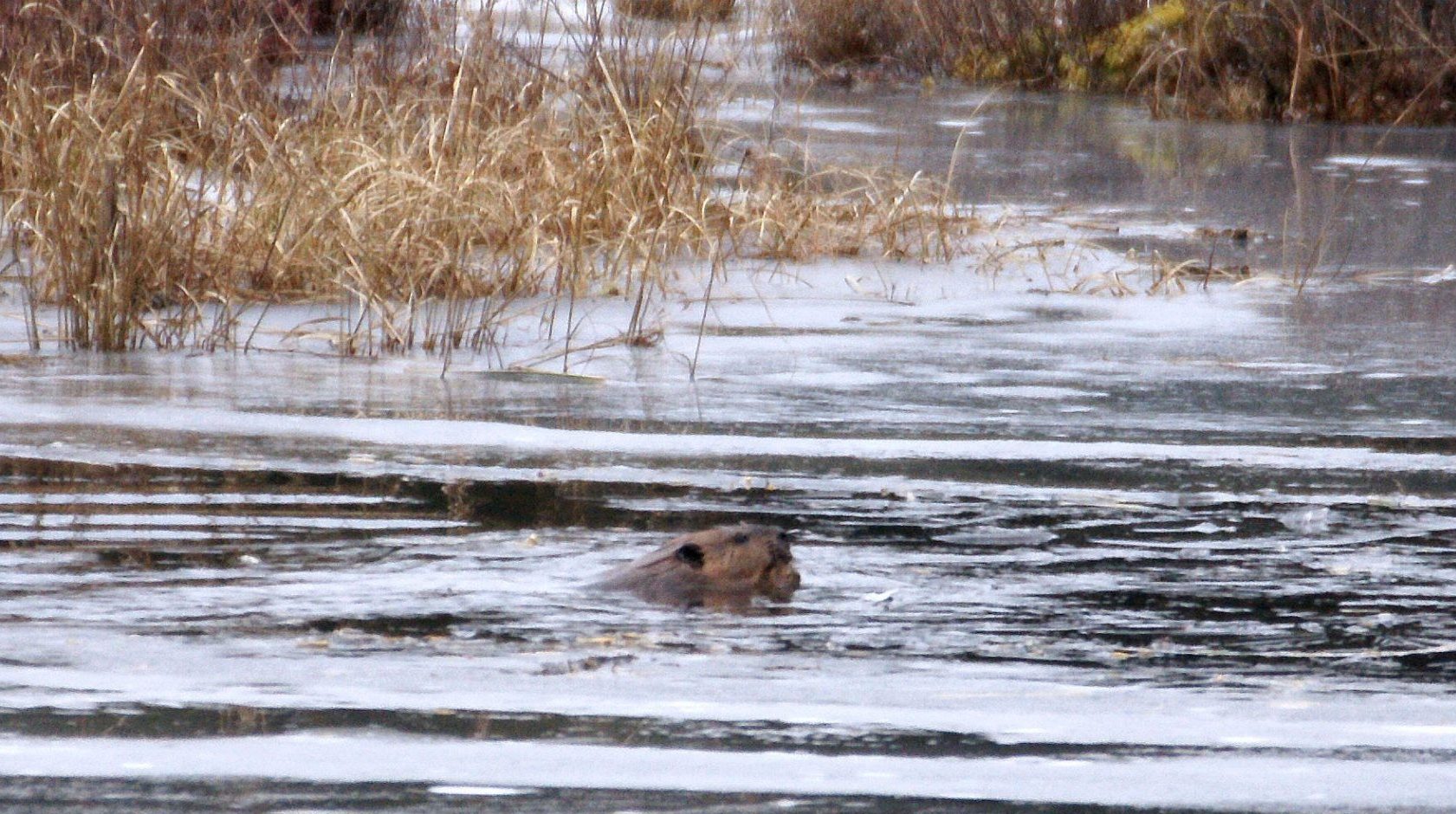 And then it froze again and all the skaters came back. Me being me, I set off to explore a re-frozen zone that was a little quieter above the sneaky second beaver dam! An ice world to myself, because when I walk alone, I prefer to be by myself.

But I wasn’t by myself per se. The recent warm, rainy stretch had opened new holes in the ice, from which water had run and then froze again. Somewhere in the middle of all that, loads of caddisfly larvae had dragged their homes onto the ice. There were literally hundreds of caddisfly casings frozen on and in the ice. The vast majority were empty (vacated in an attempt to molt? A mid-winter, warm day flight?). I saw no empty larvae exoskeletons on nearby vegetation—a sign of flight—but that doesn’t necessarily mean anything. 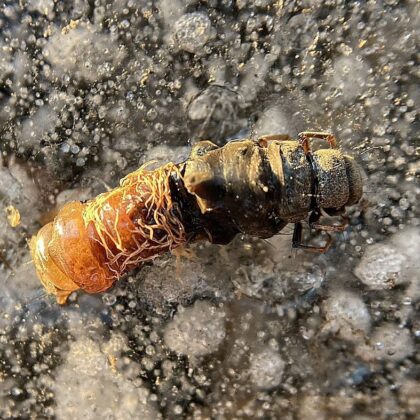 What I did find was a handful (not literally) of frozen caddisfly larvae carcasses—some loose (naked), some still attached to their casings. I’d never seen a naked caddisfly larva before and it was cool to check out the network of strands that would hold collected debris in place to form the protective casing. I mean, cool for me, not so much the caddisflies themselves. I don’t think they were offended.

And then, just like that, the caddisfly casings, the otter opening, and the beaver world got buried in snow. With almost two feet last weekend this scene probably won’t be seen (by me or anyone) for a while. The timing was good while it lasted, and I’m excited to see some lessons in the snow (rubbing hands greedily).

In the meantime, I’ve come up with a new default answer to the “lack of skates” question: “I don’t know, where are your boots?” But really, who cares what footwear you have or what activity you’re up to. Winter is one of the top four seasons to be alive in—just get out in it!