When it comes to being outside there are a few mantras (for lack of better term) that I live by. One favorite is “whatever gets you out there.” This mantra is inspired by the happiness that comes from seeing people outside and active. It doesn’t matter what activity one is partaking in (within moral limits, of course) just as long as it gets you outside. I don’t “get” cross country skiing for example. For me, traveling that fast is too fast, but hey whatever gets you out there…

The neighborhood I’m referring to is in Tenants Harbor and it includes plants, animals, as well as all of the lessons they can teach you.

Another catchy phrase I’m all about is “I’m getting to know the neighborhood.” From a human perspective, one might think the phrase refers to wanting to become acquainted with and care for the people who live close by. And in a way, that is correct—I like people and care for my neighbors, but for me “getting to know your neighborhood” extends beyond humans and humanoids.

The neighborhood I’m referring to is in Tenants Harbor and it includes plants, animals, as well as all of the lessons they can teach you. The type of lesson that provide that “sense of place” when absorbed.

And since nature is always changing, the pursuit to learn about one’s neighborhood turns out to be an insatiable hobby. A hobby that demands frequent, if not daily visits to keep up. It may not be for everyone, but hey—whatever gets you out there, am I right? 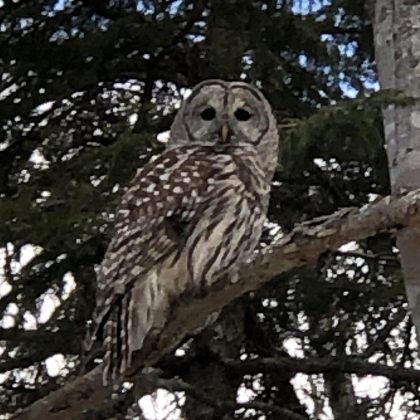 “You can’t put the same shoe on every foot” is another phrase I like. I learned that one years ago (1994) from a teacher in Wisconsin. It’s a lesson in recognizing individuality, morphing expectations, and the ability to cater to a spectrum of needs and interests (or at least try to). I’ve added an addendum to the catchy phrase—“but, there are groups of feet where the same shoe would fit, at least snuggly.” Everyone is different, but some people are similar—you might call the folks similar to you “your people” or “your peeps” or whatever the opposite of a granfalloons is. We like to avoid granfalloons (me and my peeps that is).

This all brings me to the friendly neighborhood Thissells.

A little over a year ago, Randall and Mercedes Thissell moved in down the road with their wonderful daughters Evie and Lily, their dog Violet, and their two cats Mittens and the other one (whose name is slipping my mind). They had lived within the St. George boundaries for several years prior. With Lily being in the same class as Leif (my son), and Evie having been taught by Amy (my soulmate) we already knew them and were psyched that they were moving nearby.  Welcome to the neighborhood as they say!

The original excitement had more to do with the fact that “the more kids in the neighborhood the better” and that the young Thissells would be a wonderful addition to any block—I think I can speak for everyone when I say this. These were reason enough for our excitement, but what I didn’t realize then, was that the Thissells were very interested nature observers. I mean, don’t get me wrong, everyone observes nature, and we love that about everybody, but what the Thissells brought was a willingness to share moments as they happen. I think what we call these types of people are “friends.” Like Meg, Brian, and Alletta from across the street, we liked them. 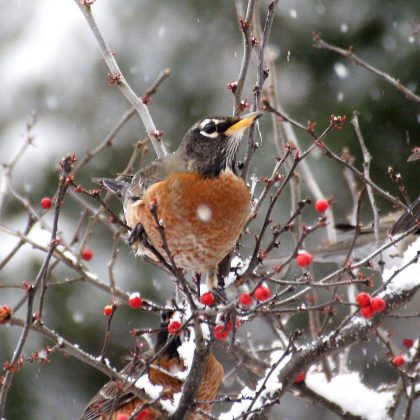 Take this example from a few weeks back. One morning, Randall sent me a text saying their yard was loaded with Robins and a sprinkling of Cedar Waxwings, many of whom were drinking water from puddles in the road (Robins are so gross).

The Thissells live maybe a 1/8th of a mile from us—there are approximately 11 houses, one parking lot and a few small wooden patches of earth between our yards—but it might as well have been 10 miles away as there were no Robins to be found in my yard. In fact, there weren’t any birds of any kind at all. Based on the complete lack of activity in my yard, I could have gone the whole day thinking there were no birds in St. George at all. Oh, how wrong I would have been.

So, I did what anyone would do—I hustled over there to soak in the American Robin action! These were the “darker” North East Canada Robins, and with the freshly falling snow they were striking both in contrast and in numbers—50 maybe? Add in the mix a handful of Cedar Waxwings and we had quite an impressive flock. The birds were snacking on nearby Winterberry and Multiflora Rose, and suddenly it made sense—we don’t have either of those winter food sources in my neck of the neighborhood—and diversity in the neighborhood is good.

The scene was fantastic and the birds very tolerant as they feasted on berries and washed their meals down with puddle water. And just when I thought it couldn’t get any better, Randall appeared with two cups coffee. Without the Thissells, I would not only have missed the action, but would have been decaffeinated as well. Gives me shivers just thinking about it!

The feeders attract songbirds which attract predators like the Coopers Hawk who enjoys a good hunt in their sunflower seed-based ecosystem.

The Thissells also have an active feeder system in their yard, and actively watch and document their avian visitors. Neighborhood classics like Downy and Hairy Woodpeckers, White-breasted Nuthatches, and Black-capped Chickadees appreciate the sunflower seeds on a regular basis.

Their feeders have also attracted the random, “irregular” visitors to Maine, like the Red-bellied Woodpecker or Carolina Wren. They attract songbirds which then attract predators such as the Coopers Hawk who enjoys a good hunt in their sunflower seed-based ecosystem. Word spreads, lessons are learned, sightings are shared, and the neighborhood gets a little smaller while it’s also growing bigger. Dreamy, I know.

When the families get together, we have fun exploring the neighborhood. On the ice, on the trails, tracking in snow or just setting up the trail camera—the Thissells are always primed and ready to go!

During these times of social bubbles and face masks, it’s great to have peeps to share experiences with and neighbors who are “always looking,” which really is the mantra to live by. Sharing what they see just down the street, and in real time, makes all the difference. Every street could use a house of friendly neighborhood Thissells, I know we appreciate them.

And, of course, whatever gets you out there!