In “nature-speak” there are many words for transition: molting, shedding, and metamorphosis come to mind right off the bat. These particular transitions occur on a somewhat regular basis (often with implications of life and death).

Amphibians have to get metamorphosizing and “out of the pool” before they dry up each spring (and when I say “dry up” I’m referring to both the vernal pool they’re born in and the amphibians themselves). A Monarch in a chrysalis needs to hurry up and figure out where its wings attach if it wants to be the next generational migratory representative for its family. A male Scarlet Tanager’s chances of passing on genes and feeling even the slightest bit “stud-like” are little to none if it doesn’t change from lime yellow to scarlet in time for spring.

This is the exact kind of inexactness that leads me to use my own enhanced calendar.

Observing transitions in nature can be fun for the observer but tend to be more stressful for the participants.

A classic, easily observable, natural transition (albeit one that’s on a slightly more astronomical level) is the change of season. No better way to be aware of the tilt of the earth than going outside in February with no shoes on, am I right? For those who follow the Gregorian calendar—and you know who you are—the dates for each season are set in stone.

Winter solstice—December 20th(ish) marks three months of winter. Spring Equinox—March 21st(ish) marks the beginning of spring and so on.  The 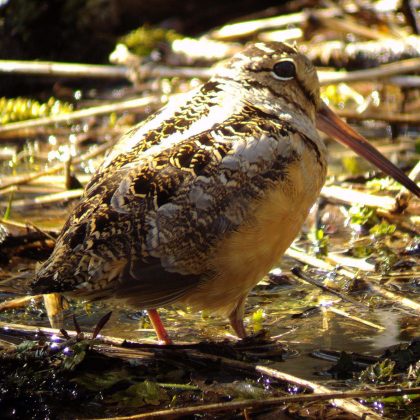 math here makes it easy to break the year into quarters and the seasons into thirds, with each third equaling about a month. Clearly northern hemisphere winters are compromised by accepting the “dwarf month” known as February as a normal month (I’d like to vote on that, but that’s a whole other column…).

So, we end up with four (main) seasons, which are consistent as far as daylight length goes. Seldom, though, do the seasons reflect the reality of fluctuating and ever-changing weather patterns. Consider the frequent and dramatic bouncing back and forth between snow and sun in April in Maine? This is the exact kind of inexactness that leads me to use my own enhanced calendar. It is a calendar that includes a set of new alternative seasonal transitional appendages (or NASTA).

Consider the winter of 2015. It was a season that wouldn’t quite quit. The entire month of April was winter—no argument can be made otherwise. Now on a NASTA calendar, the time bubble would take over the entire month of April—meaning the whole month was NASTA. (Needless to say, I thought it was a great year.)

I gathered evidence from the trail camera, which repeatedly showed both male and female fishers nearly crossing paths—sometimes only a few hours apart

March of 2021 was pretty much one big NASTA of a month as well in that winter died abruptly on February 28th—there was no smooth seasonal transition as a Gregorian calendar would imply.

My personal hope this winter was to track the pair of fishers that spent time in the woods behind my place and find evidence of mating activity (I know, typical). The first two weeks of March is usually when fishers mate. Had there been snow, tracking frisky fisher behavior would have been easy. But there was no snow to speak of (reposition NASTA time bubble over the entirety of March).

Instead, I gathered evidence from the trail camera, which repeatedly showed both male and female fishers nearly crossing paths—sometimes only a few hours apart. Both were mostly active at night, but one day the male showed up mid-morning—there’s a fair chance hormones were involved. Who could blame him? If I controlled the weather, I’d move the NASTA bubble so that winter and snow lingered into March and I could have captured tracks and trails, but that’s not how the Gregorian or the NASTA calendar work.

When breeding, weasel species such as fisher, and larger birds like Great Horned Owls, Bald Eagles, and Ravens follow the Gregorian calendar. Like vernal pools and their associated amphibians, these larger predators must start the rearing process early or their heirs won’t have enough time to mature before dispersing. While the winter-spring NASTA calendar (and by this I mean fluctuating temperatures) doesn’t influence the timing of courting and breeding activity, it does influence the success a pair has from year to year.

There are many species that migrate north to take a chance on the ever fluctuating winter-spring NASTA calendar. These species—Red-winged Blackbirds or Common Grackles—often fill hearts with appreciation and hope for spring. In fact, I bet if they showed up in May, when the warblers and other sporty songbirds arrive, they would likely be no more than another species on a checklist.

The American Woodcock is another species that moves north as soon as the ground gets soft enough to jam an almost three-inch bill into. The NASTA calendar in the north-east is so variable it can cause trouble for a bird reliant on warmer temperatures and soft ground. 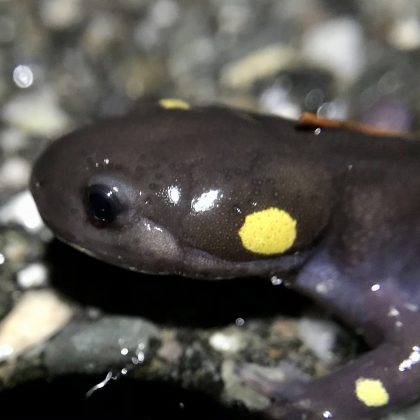 There are some species which you might think would benefit from the NASTA calendar and its irregularity, but which actually are at the mercy of strict conditions. We are talking about the amphibians associated with vernal pools—spotted salamanders and wood frogs for example. The timing when these critters emerge, cross busy roads, and migrate to the timely vernal pools throughout mid-coast Maine ranges from as early as March 7th to as late as April 25th.  This migration is dependent on warm, wet evenings. Occasionally, the winter-spring NASTA calendar means dry spells or rain that is too cold causing our moist amphibian friends simply stay put. Every degree and drop counts when you are cold-blooded amphibian (Estonian saying), and that bears true every year as to when vernal pool activity begins.

All that said, amphibian migration conditions were met in St George over the March 26th (2021) weekend—this date happens to be the date I toss out whenever asked about amphibian migration in Mid-coast Maine. Many a time, I have said “last two weeks of March, about the 26th.” Somethings just aren’t bound to the restrictive Gregorian perspective OR the fluid NASTA calendar. Amphibians are mavericks.

Does an Amphibian migration, or aerial Woodcock performance replace the hypothetical “missed” fisher mating tracking sessions? Of course not, but it doesn’t have to. It reminds me of that old question, “if fishers mate in the woods and there is no snow to track them, does she still get pregnant?”

The fishers mated this year. They were going to, regardless of snow. The woodcock display I can watch from my back porch, or the amphibian migration I witness is a complement to, not a replacement of, fisher activity. “What are you looking for?” is a common question I get. The answer is always, “Whatever is out there.” And how can I know what I am looking for until I find it?