Maine Coast Heritage Trust says that with a last-minute surge in giving, it has met the Dec. 31 deadline and raised the final $260,000 needed to secure West Little Whaleboat Island and two smaller islands for conservation and public use.

(December 16, 2021 – Topsham, Maine) – Some of the last remaining undeveloped islands in Casco Bay have been protected in perpetuity thanks to a dynamic brewery partnership, the community support of a small marina, a dollar-for-dollar matching pledge that catalyzed hundreds of supporters, and two anonymous donors who took the project over the finish line.

Maine Coast Heritage Trust confirmed today that a land transfer has been completed and a stunning trio of islands and ledges in Casco Bay—known as The Little Whale­boat Island Project—has been permanently protected.

“Undeveloped islands are uniquely rare, and we are thrilled to be able to claim success on this important project for Casco Bay,” said David Warren, Planned Giving and Major Gifts Officer at Maine Coast Heritage Trust. “The community support for this project—from local businesses like Maine Beer Company in Freeport and Paul’s Marina in Brunswick—has been truly inspiring.” 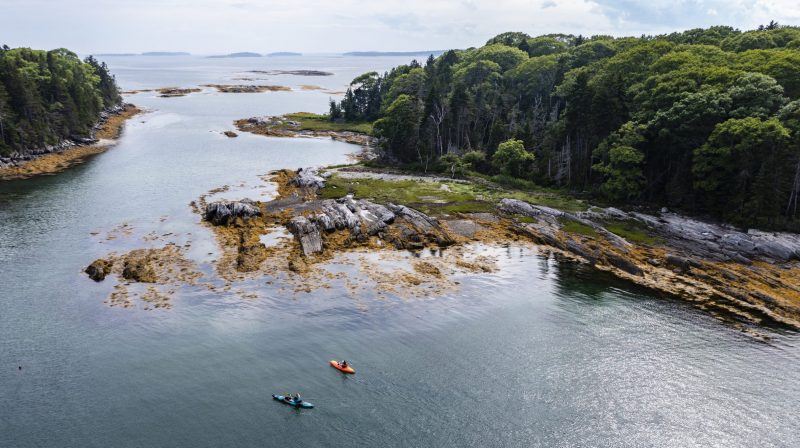 In August 2021, Maine Beer Company pledged $50,000 to the Little Whaleboat Islands Project and on November 8, the company released their newest beer, Little Whaleboat IPA, to draw national attention to the project and to celebrate Maine Coast Heritage Trust’s ongoing work of protecting Maine’s 3,478- mile coastline for people and wildlife. Over the fall, Paul’s Marina mobilized the Casco Bay boating community to raise $50,000 toward the project.

Maine Coast Heritage Trust was working under a December 31 deadline to raise the full $1.3 million needed to acquire and care for these islands as public preserves. Earlier this year, two anonymous donors pledged $350,000 in dollar-for-dollar matching funds on all gifts made to the Little Whaleboat Island Project. Maine Beer Company released $50,000 of that matching gift, and Paul’s Marina contributed another $50,000. With the fundraising project now completed, resources have been secured for land acquisition, ongoing stewardship, and operational support.

“We could not be more grateful for all of the generous gifts of support for The Little Whaleboat Island Project,” said Tim Glidden, president of MCHT, who is set to retire at the end of 2021. “In this unprecedented real estate boom, it goes without saying that gifts in support of conservation make an enormous difference in our work to protect special places along the Maine coast.”

The three islands—made up of Little Whaleboat Island West, Nate & Tuck—comprise a total of 22 acres and are a vital link in the chain of protected islands off Harpswell already conserved by Maine Coast Heritage Trust. These include 122-acre Whaleboat Island, the largest undeveloped island in Casco Bay, protected in 2002 with support from the Land for Maine’s Future program; and The Goslings, a trifecta of popular islands that feature sandy beaches and beautiful campsites. The successful protection guarantees permanent public access, provides stable sanctuary to a range of wildlife, including seals and seabirds, and secures an overnight campsite that is currently on the Maine Island Trail.

“We’re proud to see the community come together on this successful project to preserve part of Maine’s coast,” said Ryan Conery-Poulin, Tasting Room Operations Director at Maine Beer Company. “The work doesn’t stop here though, we need to strengthen our efforts to support the stewardship of these islands and MCHT’s other coastal preserves, and work to provide access and education for more people to experience these places.”

“These islands should be for everybody,” said Helene Marsh Harrower, a Brunswick resident and co-owner of Paul’s Marina. “The conservation of Little Whaleboat Island West gives the recreational boating community another great place to go and spend time outside with family. The support from the community was amazing. Everyone wanted to help—even people who had never been to the island before. It was so refreshing and exciting to see.”

ABOUT MAINE BEER COMPANY
Maine Beer Company is built around the simple concept: “Do what’s right.” This motto is at the forefront of every decision they make from how they treat their employees, to the beer they brew, to taking care of the world around us. Their Freeport, Maine-based brewery was founded in 2009 by brothers David and Daniel Kleban. They were determined to create a company centered around social responsibility and doing what was right. Maine Beer Company is known primarily for their IPAs and pale ales, but also for their commitment to environmental causes through their membership in 1% for the Planet.