Located in Brunswick, this 87.5-acre preserve invites visitors to explore its trails in search of wildlife and picturesque scenes of northern Casco Bay.

Woodward Point is good for:

From Route 1 east of Brunswick, take the Cook’s Corner exit. Stay straight off the exit and pick up Route 24 south. Drive 1.3 miles and then turn left onto Board Road. In 0.4 miles, bear right onto Woodward Point Road. Follow the public road until the end, where it swings right. Turn left onto the road leading into the preserve and head down the hill. After passing the barns, find the parking lot on your left.

MCHT purchased the preserve in 2019 thanks to a bargain sale from the previous landowners, Jaki Ellis and Andy Cook, who farmed the land for years. Below is footage from their working farm, taken by the Cook-Ellis family from April through December of 1989.

Working in partnership with Brunswick-Topsham Land Trust (BTLT), MCHT raised the necessary funds with support from the Land for Maine’s Future Program, the US Fish and Wildlife Service’s Coastal Wetlands Program, the Town of Brunswick, and through the generosity of numerous private contributors. MCHT now co-manages the preserve with BTLT.

Woodward Point is one of the largest undeveloped parcels of land in northern Casco Bay – a designated estuary of national significance. The preserve cradles all or part of two commercially important shellfish beds and is surrounded by critical habitat for waterfowl and wading birds. Woodward Point’s vast fields are also home to a healthy population of bobolinks estimated to be around eighty birds in the summer.

The Woodward Point property totals 87.5 acres of uplands. In addition, there are more than 38 acres of subtidal wetlands and almost four acres of fringing salt marsh. Most of the intertidal lands are state-mapped significant shellfish beds as well as high-value waterfowl and wading bird habitat. The shellfish beds in Woodward Cove and “the Little Bullpen” consistently produce some of the highest shellfish landings in the Casco Bay region.

The fields found on the preserve today were once part of an active farming operation that included dairy and beef cows, as well as hay production. Previous owners also built a dam on the western side of the point that forms a small pond.

Be prepared and watch your step

Many ticks and porcupines call Woodward Point their home. Protect yourself from potential tick bites by following current recommended protocols including, but not limited to: dressing appropriately (wearing light colors, tucking in shirts and socks), using insect repellent, and checking your body during and after spending time on the preserve. Porcupines are a more visible feature at Woodward Point. Be alert for these slow-moving animals. Enjoy them from a distance. 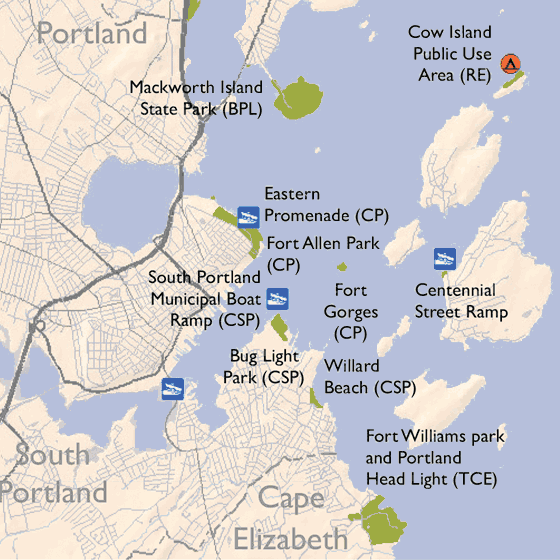