Witherle Woods is great for:

From the junction of Routes 166 and 166A in Castine follow Route 166 south 0.9 mile to the top of a hill. Continue right at a sharp bend in the road and drive 0.8 mile along Battle Avenue to the preserve on the right. Parking is available along the fence line (please do not block the gate). 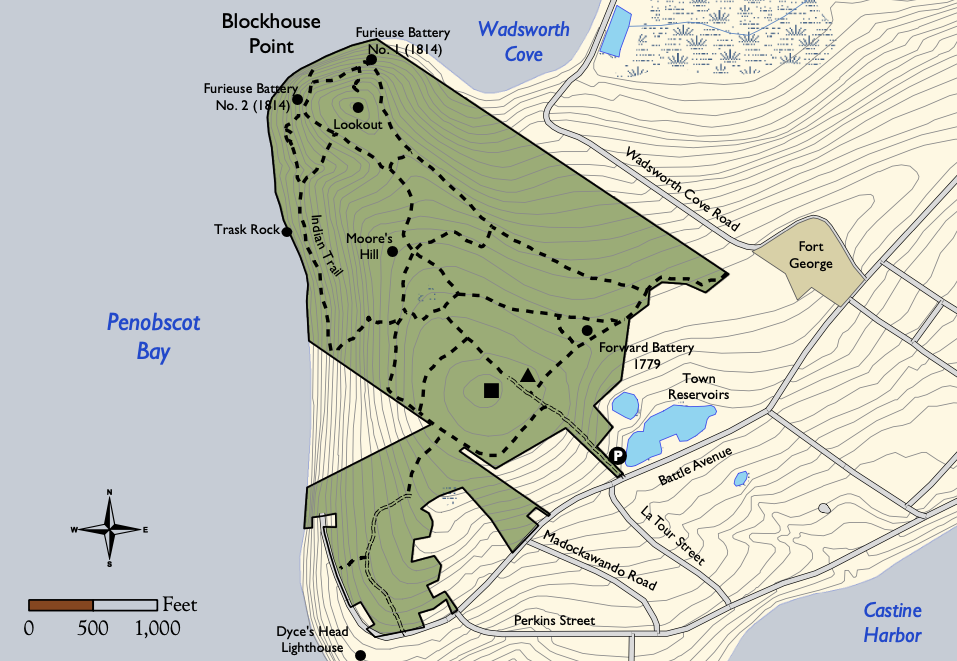 Begin at the Battle Avenue parking area and follow the dirt road to the kiosk near the top of the hill. Turn right, hike past the remains of a forward battery constructed here in 1779, and continue to the third trail junction. Bear left here and join this wide path as it descends gradually for about three-quarters of a mile to the former Furieuse Battery 1 site, built in 1814 by the British. The trail quickly reaches a short spur on the left that rises to the Lookout, a vantage point from which British troops occupying Castine watched for enemy forces approaching on Penobscot Bay.

Past the spur, the main trail passes the Furieuse Battery 2 site just before arriving at a junction with the Indian Trail. Turn right here and drop steeply towards the water’s edge. Follow this path left as it parallels Penobscot Bay, occasionally offering scenic views. Eventually the route swings sharply left and climbs the steep hillside. At a trail junction, turn left and then take the next two rights to return to the kiosk and end the loop.

If the land could tell a story

Witherle Woods has a long history of human activity that goes back at least as far as colonial times when the French used the site as a trading post, fort, mission, grazing area, and for recreation. During the nation’s earliest days, Witherle Woods witnessed military action during both the Revolutionary War and the War of 1812. In fact, archaeological research has located fortifications from both events. By the 1870s much of the present preserve was owned by George Witherle who maintained carriage trails throughout the property. At that time, the land was comprised mostly of open meadow.

Before hitting the trails at Witherle Woods, learn more about the geologic forces that shaped this preserve and the people who left their marks: The History of Witherle Woods Preserve (PDF).

This 193-acre preserve on scenic Castine peninsula features a forest of red and white spruce, balsam fir, white pine, and several hardwood stands. Over the past decade, the woods have experienced a high level of mortality due to old age and insect damage. After storms in 2007-2008 caused major blowdowns, MCHT worked with a forester and logger to salvage the timber, ensure public safety, and prepare for a healthy future forest.

How Witherle Woods became open to the public

In 1985 Witherle Woods became MCHT’s first preserve when the 97-acre Hatch Natural Area was donated to MCHT in an effort to conserve this important ecological and historic community resource.