Monroe Island is good for:

The two best ways to access Monroe Island are from the all-tide, paved public boat launch on Mechanic Street in Rockland or from Richard Carver Harbor Park on Lighthouse Road in Owls Head (hand-carried boats only).

From Owls Head the distance is about 0.5 mile and from Rockland the trip is just over four miles. Approach the island from the west to locate six beaches where small boats can safely land (see map), as well as a dock with seasonal ramp and float near the center of the island’s western shoreline.

Please note: due to the wave and wake activity in the channel, the float is not suitable for extended tie-ups. Boats may use the float to load and unload passengers, but please be prepared to anchor and row ashore.

A note on overnight parking: Campers wishing to leave their cars in the Richard Carver Harbor Park overnight need to pick up a free permit from the Owls Head Town Office. The phone number is 207-594-7434. 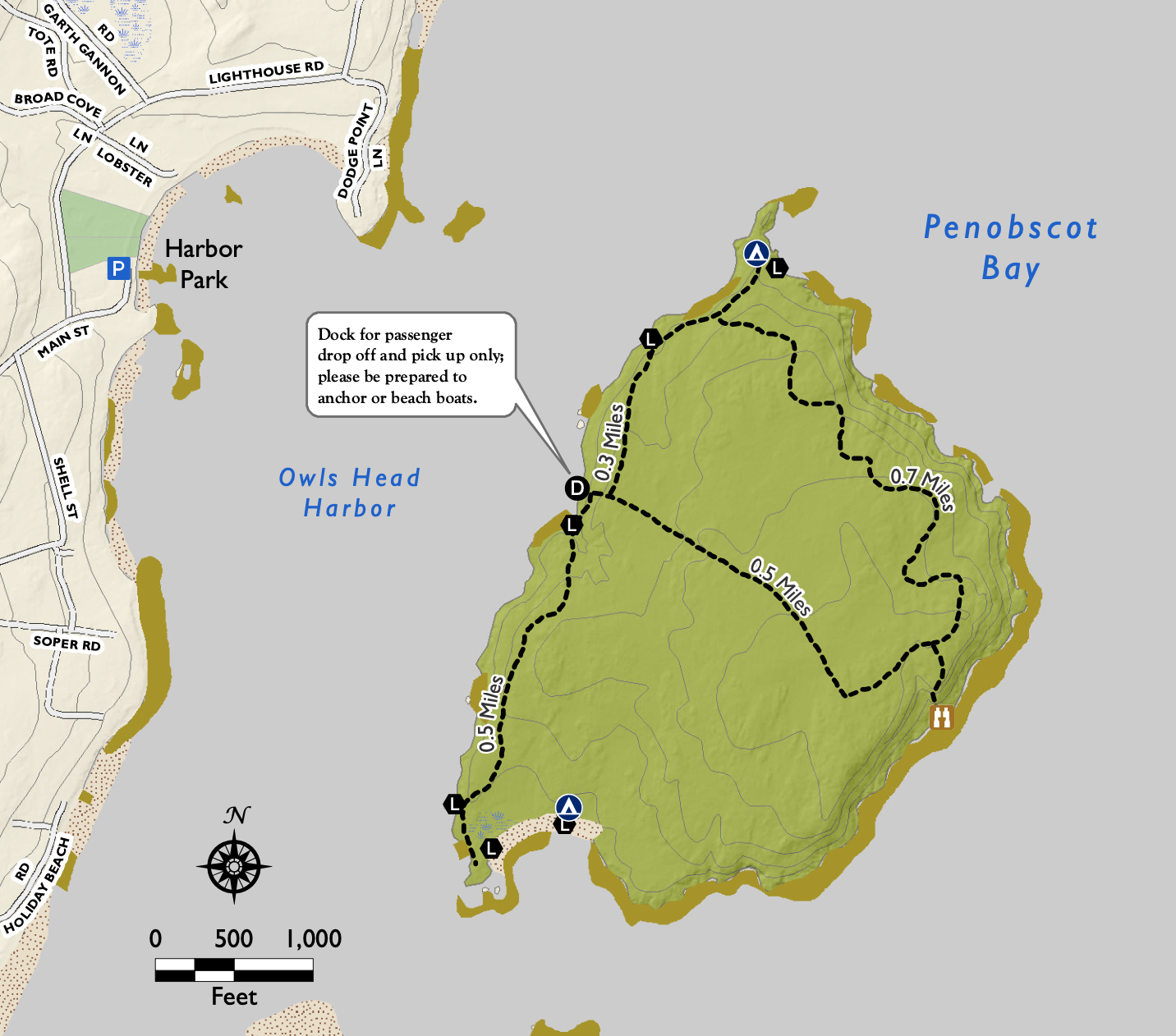 Given its large size and land use history, Monroe Island offers a variety of habitat types including freshwater ponds, forested wetlands, early successional uplands, brackish marsh, and beaches. While the preserve is predominantly forested, there are a few clearings and five man-made wildlife ponds. Most of the shoreline is steep and rocky.

There are many signs of human activity on the island. The previous owner developed a network of woods roads, some of which form the preserve’s existing hiking trail network. In addition, there are remains of stone walls and fencing present, as well as culverts at road crossings and the man-made ponds.  At the northern tip of the island are the remains of a former US Naval range tower used to assess speeds of Navy ships.

The island’s diverse habitat attracts many wildlife species, including deer, otter, salamanders, and numerous bird species. Monroe Island also has a healthy tick population, so it’s best to remain on the established trails. We also suggest wearing light colors, tucking in shirts and socks, using insect repellent, and checking your body during and after spending time on the island.

Beginning in the 1940s, Monroe Island was owned by the Faunce family. They managed the island for forestry and as a wildlife sanctuary, and they protected much of the island with conservation easements held by the Maine Department of Inland Fisheries and Wildlife and Maine Coast Heritage Trust. In 2018, the Faunce family sold the island to MCHT to ensure permanent protection of the entire island, as well as guarantee public access.