Malaga Island was once home to a mixed-race fishing community forcibly removed by the state in 1912. Now a public preserve and important Maine historical site, we encourage all to learn the story of Malaga and those who called the island home. Malaga Island is good for:

Malaga Island is located near the mouth of the New Meadows River in Phippsburg. The best landing area is on the white shell hash beach on the island’s north end. The nearest public boat launch is the Holbrook Street Landing in Cundy’s Harbor off the east side of Cundy’s Harbor Road where there are three parking spaces. There are more places to park at the launch on the southern end of Sawyer Road in Brunswick on the New Meadows River, further away from the island. Boaters might also consider launching from the Bethel Point Ramp in Harpswell for a small fee.

Looking for a guide? Check out Seaspray Kayaking located in nearby Sebasco Harbor. They have been guiding sea kayaking expeditions in the area for over 20 years. Master Maine Guide Alice Bean Andrenyak of Alice’s Awesome Adventures offers guided ecotours of the Greater Brunswick and Midcoast Maine region. She can be your guide on a trip to Malaga Island, designed specially for you. 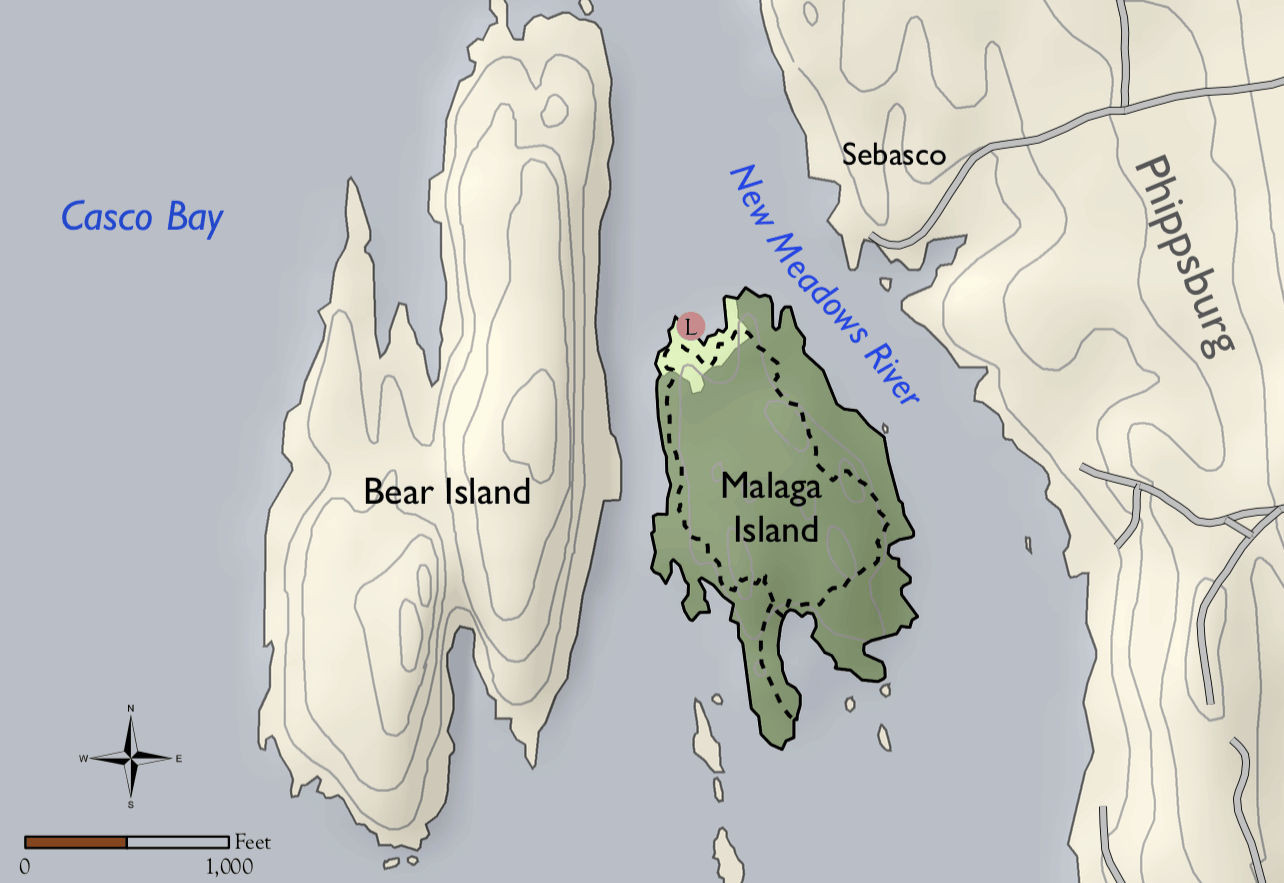 The island was home to a mixed-race fishing community from the mid-1800s to 1912, when the state of Maine evicted 47 residents from their homes and exhumed and relocated their buried dead. Eight islanders were committed to the Maine School for the Feeble-Minded. “I think the best plan would be to burn down the shacks with all of their filth,” then Governor Frederick Plaisted told a reporter the time.

The plan to build a summer resort on the island never came to fruition, but many Malaga descendants remained in the area, becoming integral parts of the communities that had shunned their ancestors. Nearly 100 years after the cruel act took place, in 2010, then Maine Governor John Baldacci issued an apology, and the Maine legislature passed a resolution expressing its “profound regret.”

Sharing the story of Malaga

Since acquiring the island, MCHT has worked with various partners, including the University of Southern Maine, to better understand the island’s archaeological history and to help share this forgotten chapter of Maine’s history. Several very special events have taken place on the island over the past several years, including the Re:Past, curated by Myron M. Beasley in 2019.

In September 2010, Malaga Island Preserve became part of the Maine Freedom Trail. Today, numbered posts mark the sites of the homes razed by the state in 1912.

We encourage you to learn more about the story of Malaga Island and those who called this special place home. Check out these additional resources before visiting the island:

On the island, you’ll find more information at the kiosk, which offers a glimpse of those who once lived here and a brief description of the cruel eviction they endured.

What’s with all those lobster traps?

The lobster industry is an important component of the local economy. The long-time practice of nearby lobstermen storing traps and fishing gear on the island has continued under MCHT ownership. Please do not disturb the gear, but feel free to order the local catch at nearby stores and restaurants.

Maritime spruce-fir forest covers most of the 42-acre Malaga Island Preserve. There are also one or two acres of overgrown meadow on the island’s northern end, while on the southern end, one can find a brackish pond and salt marsh. The shoreline is mostly rocky and rugged, except for a few small beaches and patches of salt marsh. The white shell hash beach on the north end of the island (near the overgrown meadow) is the best landing spot for small boats. Note: take care to avoid poison ivy on the northern end and in patches on other parts of the shoreline. It’s easily avoidable if you stick to the trail.

How Malaga became open to the public

Malaga was purchased by MCHT in 2001.