Some winter days, the air is crisp, the snow is fresh, and the animal tracks seem to go on forever. Other days, however, are loaded with little more than super-slick ice, sideways-blowin’ wind, and the single-digit chill that comes with it.

The world can seem pretty trackless on a day like that—as if no animal in their right mind would trek. But don’t be fooled! Both kinds of days can be great to look for animal signs!

When adventuring out onto any frozen, aquatic biome (the marsh near my house in March, for example) it’s a good idea to be aware of where patches of thin ice might be.

Natural openings in ice occur for numerous reasons and can be anticipated along the ice edges, directly above and below beaver dams, or where a creek runs into a pond or other waterway.

At places where water is flowing fast, there might even be open water after a string of negative degree days (thankfully those are behind us…). Survival instincts (hopefully) tell you to steer clear of such areas but openings like these can actually be hot spots to check for tracks and trails—even on the bitterest of days! It doesn’t get lower than 32 degrees Fahrenheit in the fresh water below and so life will go on under the ice regardless of the blizzards and winds we deal with above. Ice holes offer a glimpse into such worlds.

Otters on (and underneath) ice

There is a wonderful ice hole at the north end of my local marsh that stays open all winter. It’s an entry point used by several species of semi-aquatic mammals to access the non-frozen, freshwater habitat below.

When an otter crosses to the marsh from the Ponderosa or Seavey Cove, they often make a b-line for this opening upon arrival.

There also happens to be an otter latrine located within ten feet of the hole. The three local otters, lovingly referred to as Moe, Larry, and Curly, all mark at this latrine, and are known to come out from under the ice to spraint and then return under. Otters are creatures of habit and will mark such a spot regardless of weather! (Want to learn more about otters?)

American Mink will also use this hole to gain access the watery world below. On an especially cold day, this winter a mink came out from under the ice, explored a very short distance, and then returned to the hole. The mink left a section of “tail tracks” near the opening, documenting a period of focused activity at the opening—possibly working on keeping the hole open! On cold days some openings require a bit of maintenance!

Another day, there was a set of Muskrat tracks coming out of the hole and then marching off through the woods. I followed the trail for 400 feet to a separate wetland system I had not visited previously. The muskrat obviously knew the terrain well—better than I did for sure!—and knew exactly where it was going. The hole put the Muskrat close to this secret pond, and to the next set of plants for it to mack on! You just never know what you might find at an opening like that!

But this isn’t the only ice hole in the marsh of course! 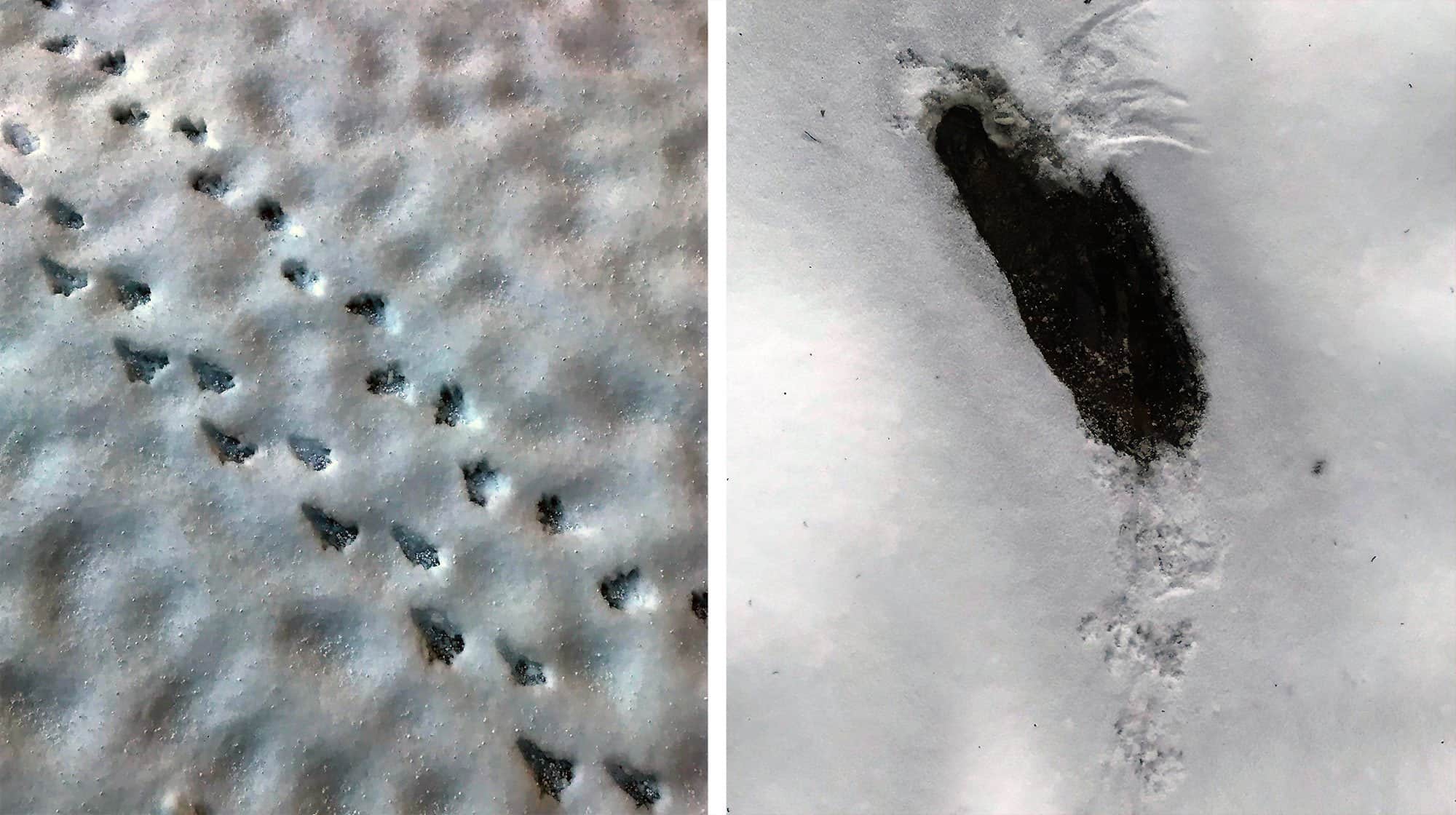 From left to right, muskrat and mink tracks

Earlier this winter, I followed an otter trail left by Larry that led to a hole in the ice in the middle of the marsh. The trail was focused and direct—this otter obviously knew of the opening and possibly helped to keep it open. Larry went in and out of the water several times, as evidenced by the significant amount of tracks in the area.

Eventually, the otter headed to the west, towards the Ponderosa, but not before feasting on a pickerel it had brought up from below. All that Larry left was the fish’s mouth and a bloodstain near the opening. Ask anyone who ice fishes and they will tell you the same thing – catching fish is easier if you can get to them (“them” being fish). This was Larry’s fishin’ hole for the day and, needless to say, I now visit this spot every time I get on the ice. 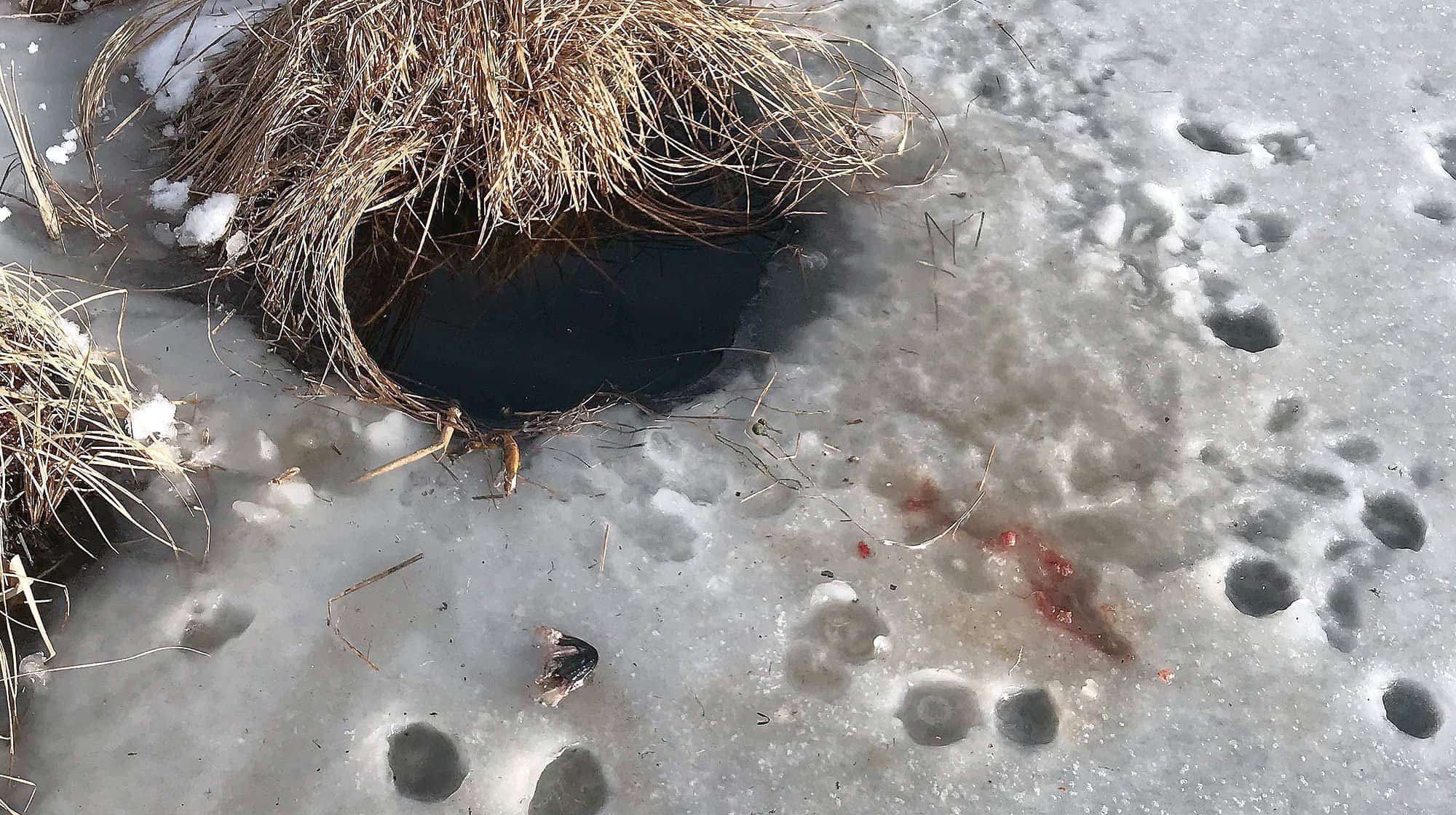 In conclusion: look for ice holes

Holes in ice are key for semi-aquatic mammals and critters to access food, travel paths, and den openings—and to get out of rough conditions on the surface. But they come out from under at some point or another! Even if it’s just to mark a latrine. One just needs to make it to the openings!

And so we’ll see you out there!