Woodpeckers and the Displays of Early Spring

By late winter, days are noticeably longer as the sun rises higher and higher. Routine winter walks once notable for animal tracks and “winter stroll silence” (aka wind) are suddenly interrupted with the sounds of avian life and activity.

Before the blackbirds, grackles, and sparrows, and woodcocks, and other “early tweeter returners” turn up the volume and establish pecking orders, it’s all about the woodpeckers and corvids (ravens, crows, and blue jays).

And since I am not the biggest fan of corvids (just being honest here) this column will focus on the increased woodpecker activity we see as temperatures transition from cold to warmish. 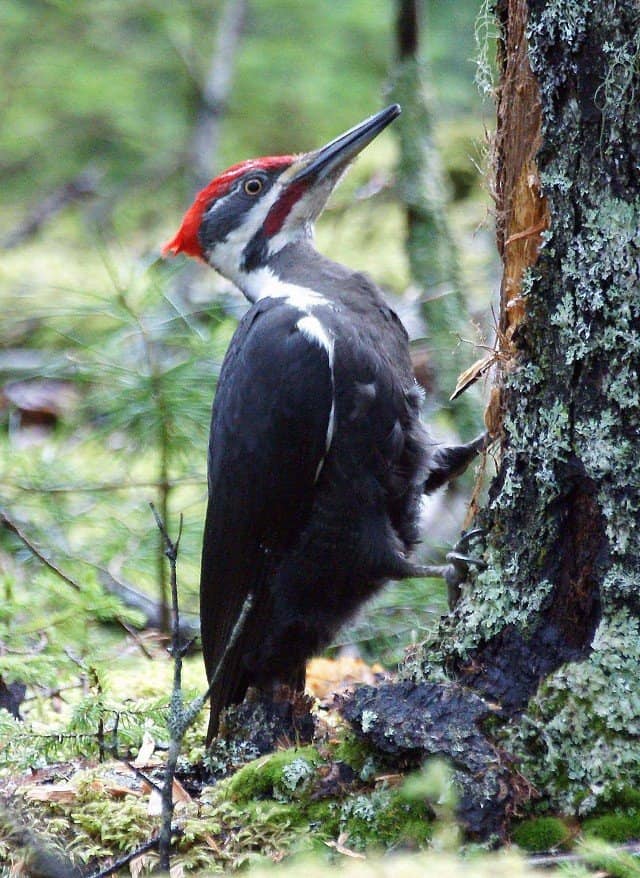 There are six species of Picidae (Woodpecker family) regularly found in St. George. Northern Flickers and Yellow-bellied Sapsuckers are typically three-season visitors, while Red-bellied Woodpeckers have been increasing their regularity over time (the way life should be) but are still unpredictable (the way life often is).

The Downy, the Hairy, and the Pileated Woodpecker species, however, are year-rounders on the St. George peninsula.

These species spend the winter months banging their bills into frozen wood in search of nourishment. When those first warmish winter days start to roll around, these woodpeckers start in almost immediately with displays of courtship and defense. (The love and hate of breeding, if you will.)

Do you hear that drumming?

The first sign of changing woodpecker activity I heard this year was “drumming.” In the classic art of non-vocal communication, a drumming woodpecker finds a hollow branch or trunk that resonates and echoes loudly when rapidly pecked—loud enough to be heard from a distance.

A woodpecker will repeat short drumming bursts in an effort to claim a territory, attract a new mate (nothing hotter than drumming), or call a mate over. All woodpeckers drum, but the drumming from (the larger) Pileated Woodpeckers echoes around the marsh—these guys announce their presence with authority!

As winter slides into early spring, keep an eye on woodpeckers and you’ll observe some great interactions and behaviors. While vocalizations may draw your attention to begin with, woodpecker battling is mostly expressed with chases and visual displays.

The “bill-wave” is a somewhat comical display were two woodpeckers face each other on a branch and shake their heads repeatedly back and forth with a oh-no-you-didn’t kind of attitude. This display is usually performed between members of the same gender as woodpecker territories are defended by gender—males deal with male challengers and females with female challengers.

A few other classic, non-vocal woodpecker displays are the “crest raise,” where a woodpecker raises its crest in excitement, and the “v-wing,” where a perched bird raises its wings high above its back, spreads its tail, and finishes the action with a lunge or attack at its rival.

Finally, the “still-pose” is where two woodpeckers lift a page out of the Milford Academy (AD) and stop all movement and remain perfectly still for up to 20 minutes. No fooling. Motionlessness is an actual battle strategy for woodpeckers and an easily observable one at that. (You can always tell a Milford bird!)

Which woodpecker is which

With its large size and loud presence, the Pileated Woodpecker is the most recognizable woodpecker on the peninsula. It’s also easy to spot their rectangular cavities low on trees along the Nature Trail and Town Forest Loops. 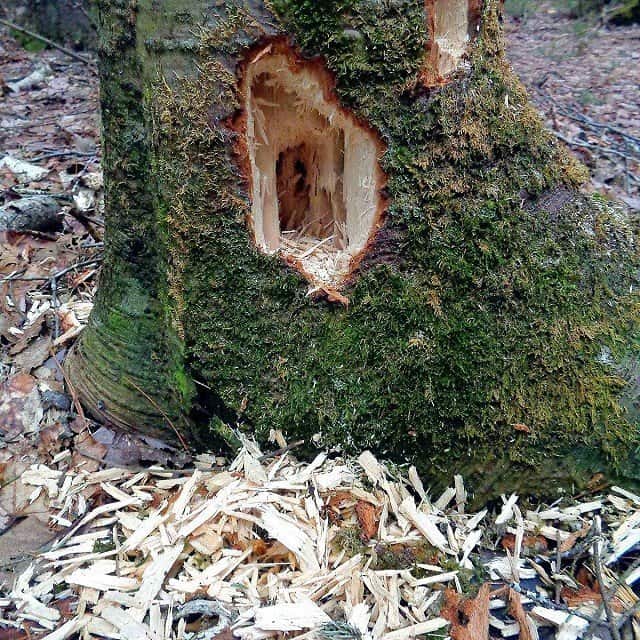 Hairy and Downy Woodpeckers, on the other hand, can be confusing to tell apart. There is a sizable size difference between the two species—Downies are 6.25 inches, Hairies 9.25 inches—but size can be tricky to judge at times. Downy Woodpeckers usually have a much smaller bill when compared to Hairies, but there can be variation in Downy Woodpecker bill size (of course!) and perspectives on size can be skewed.

A clear view of a woodpecker’s white outer tail feathers, however, can be used to definitively identify a species. Downy woodpeckers have black barring, one to three black dots on their outer tail feathers. This can be especially helpful when the woodpecker is directly above you in a tree!

We look forward to seeing the migratory woodpeckers return and, of course, welcome the random, oddball Picidae that may turn up on the peninsula (there is always space for a Red-headed Woodpecker in my yard!).

The Downy, the Hairy and the Pileated are special breeds though. They are hardcore, living off the woods (and suet!) all winter, have first dibs on the best cavity trees, and celebrate the warmth of a 20-degree day. Those are my kind of birds.