A good snow can mean freedom in the woods. Strap on a pair of snowshoes and you are no longer restricted to trails (not that you truly were before, but anyways… I digress).

You can follow your own path, go your own way, wander around to your little heart’s content! Grab a friend—exploring is sweeter when shared!

Ice can be quite liberating as well, and not just for humans.

For much of the year, marshes and wetter wetlands are largely walkarounds for animals that would prefer not to enter the muck and get stuck.

But when you add a layer of ice, areas that are typically soggy, mucky, and downright impassable to many four-(and two!) legged critters become hunting zones, thoroughfares, and even skating rinks. No canoe is necessary here! Combined with a fresh layer of snow, the wandering can be heavenly.

Direct registering… What it is, and why animals do it

When the conditions are right, animal trails can often be seen at a distance, and, even before you get up close to observe a single track, much can be deduced from answering a couple of key questions.

Are the tracks in a straight(ish) line of what appears to be single tracks? If so, the animal you are tracking may have been “direct registering” its steps.

Direct registering is when a walking/trotting four-legged critter places its back foot directly where the corresponding front foot had been. This “track in a track,” or “two tracks in one” (if you will), appears to be a single track.

This walking style is efficient in snow, grasses, and most habitats, and is used by wild dogs and cats. Some domestic dogs may direct register a bit, but rarely do they maintain this formation for lengths of time without jumping and having fun (and they are fun to track!).

On the marsh in Tenants Harbor, though, the main direct register wanderers are coyote, fox, and bobcat.

Take a closer look at a couple of tracks in the trail you found.

Do they show four toes? Any claw marks above the toes? If the answer is yes to both questions, then you are looking at a wild dog track.

If the tracks are narrow and long with clear detail, that means they’re coyote tracks. Red fox tracks are small and usually lack detail due to the amount of fur they have surrounding their toe and heel pads.

There is no shortage of coyote trails on the marsh (and just about everywhere on the peninsula) after each snow. They are a presence you can count on.

Are you seeing four toes but no claws? Is the track rounder in shape than a coyote’s? Then it’s most likely a feline track.

Bobcats and other cats have retractable claws and therefore do not show claw marks in their tracks. Small cat tracks may be from a local cat on the prowl, but large cat tracks and trails are a sure sign of bobcats.

In the marsh they hunt on the ice—stealthily weaving through cattails close to the shoreline in search of an unlucky rodent.

Follow the bobcat trail into the woods you’ll likely notice that they like to hop up onto hung-up logs. Is it for a better view? Or possibly to scare a snowshoe hare that might be hiding in the space underneath the log? Or both?

In general, bobcats do whatever they want to do for whatever reason they choose.

Look at that bounding trail!

A bounding trail is made from a walk or run of “leaping strides.”

Animals that bound will jump forward with front legs outstretched. As they move, their back feet will land pretty much where their front feet had been, leaving a trail that looks as if the animal leaped from one set of tracks to the other.

Weasels are bounders, moving in a way that can look awkward but apparently works for them.

On the marsh, a local mink leaves a bounding trail through the cattails after most snows, while bounding fisher trails are found throughout the woods surrounding the wetlands. Fishers are known to avoid water if possible—even the frozen style.

If your bounding trail is large and has belly slides mixed in you are tracking a river otter (everyone’s favorite weasel). Otter trails may be short and sweet—a quick bound between ice holes or a visit to a latrine. Or they can be long and meandering as an otter crosses land in search of its next water and food source. 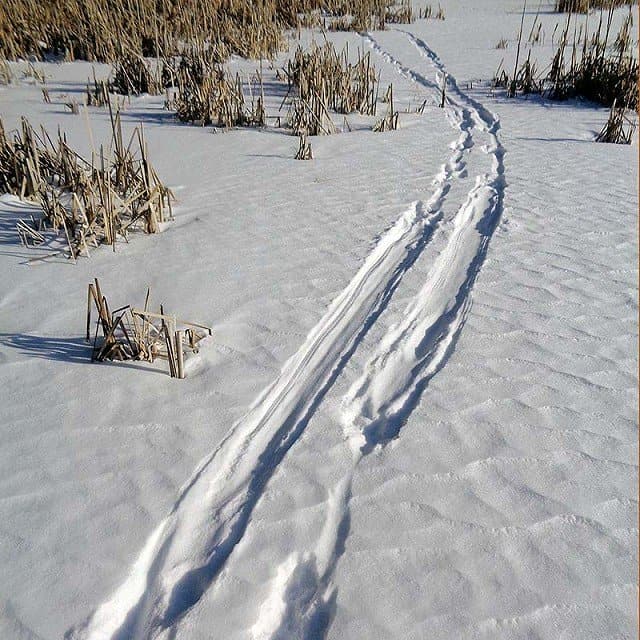 These are some of the main winter attractions on the marsh. It’s usually not too hard to find and follow tracks and trails. The only hard part is stopping!