Winners of the 2018 MCHT Photo Contest

Through July and August of 2018, people from all over the country submitted photos of the Maine coast to MCHT’s second annual photo contest.

It was such a treat to see the Maine coast from so many perspectives—from photos of happy kids on sandy beaches to epic photos of the Bold Coast to sunrises and moonrises.

Maine Coast Heritage Trust wants to thank all who submitted. It was hard to choose the winners!

Winner of the Maine Coast Prize

Tricia’s connection to Maine: “I live half of the year on the island of Islesboro (the other half in Boston), spread among all of the glorious seasons. My photography has been called a love letter to the Maine coast. My camera is always by my side to try and capture the untouched beauty of the Maine coast with a painterly touch — both its texture and its softness.”

About the photo: “This image was taken August 2018 on Penobscot Bay between Middle and Minot Islands, with Seven Hundred Acre Island and the Camden Hills in the background.

On this particularly stunning evening I snapped away in awe as we circled some of the islands near Islesboro. The lone boat by Minot Island, Daphne, looked to me both majestic and intimate, bejeweled in the summer glow and enveloped in a warm sweater. She was irresistible.”

Winner of the Preserve Prize

Peter’s connection to Maine: “My wife Marcia and I have been visiting Maine in the summers, typically August, for almost 30 years, splitting our time between remote off-grid Northwoods areas and the coast.

The down east coastal portion is our favorite by far, with Bog Brook Cove Preserve and Boot Head Preserve being among our most enjoyed among the MCHT properties. Among the non-MCHT places, we very much like the Great Wass Island and Petit Manan preserves.

At all these places I have photographed over and over again, trying to capture all their nuances in the perpetual effort to explain why I love them so much.”

About the photo: “The photo was taken at Bog Brook Cove Preserve on August 23, 2009 at around 1:30pm, high tide during Hurricane Bill. That day the waves went inland way beyond the beach. We made our way around further inland, to the outcrop on the other side of the beach. The picture was taken from there.

For scale, note the two tiny figures on the north side where one first arrives from the parking lot. They were also safely high enough.”

Winner of the Participant Prize 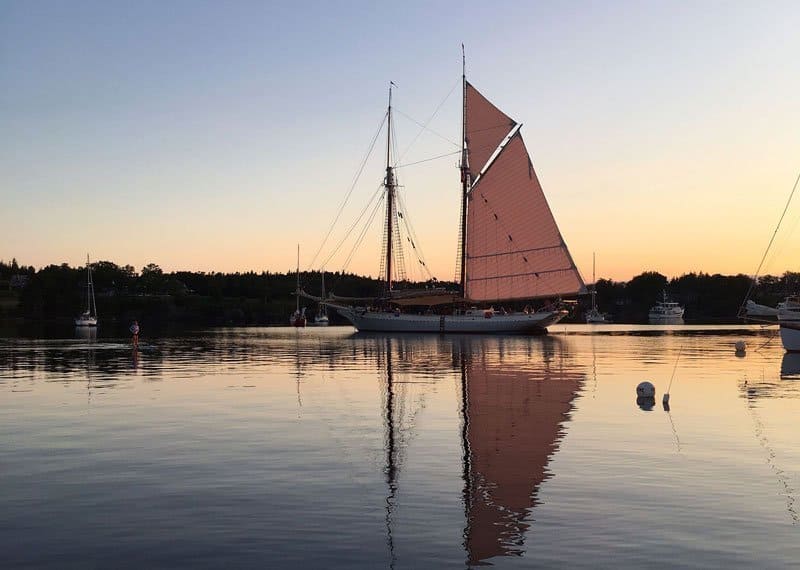 Joan’s connection to Maine: “My husband Chris and I live in North Carolina but have vacationed in Maine for many years. For a couple of weeks each summer we would rent a cottage on the waterfront in Pulpit Harbor, North Haven Island and came to love it.

About four years ago we decided to buy a cruising sailboat and to keep it in Maine to sail on during part of each summer. We use Rockland, Maine as our point of departure and have connected with a small and friendly yacht club there whose members have helped us learn about all the wonderful island cruising areas in Penobscot Bay/midcoast Maine and farther down east. We think the coastal Maine islands are some of the most enchanting and ruggedly beautiful places on planet Earth.”

About the photo: “The photo was taken in July 2018 while we were on our sailboat on a mooring in Pulpit Harbor, North Haven Island, Maine. Beautiful schooners frequent this harbor and are always a spectacular sight. But this schooner, the Mary Day, was particularly lovely at this time of day during a quiet twilight.”

Thanks again to all who submitted! Please stay tuned for more information about next year’s contest.