Why Alewives Matter to MCHT

What do bears, striped bass, people, osprey, cod, raccoons, seals, and salmon have in common?

These—and so many other species—all eat alewives.

For thousands of years, alewives filled Maine’s coastal rivers every spring, racing upstream to spawn before returning to the sea. Alewives in May seemed as inevitable as changing leaves in October.

But over the past centuries, many of Maine’s rivers and streams were manipulated to power industry, and fish passage was blocked by barriers like dams and culverts. Today, in many watersheds, the number of alewives making it upriver to spawn is a fraction of what it once was, and some are now empty of this important sea-run fish.

Here’s the good news: people, towns, and organizations are coming together to restore Maine’s rivers and revive Maine’s alewife population. And who’s benefitting? Bears, striped bass, people (particularly fishermen, who use them for bait), osprey, otter, seals, heron, eagles… The list goes on. 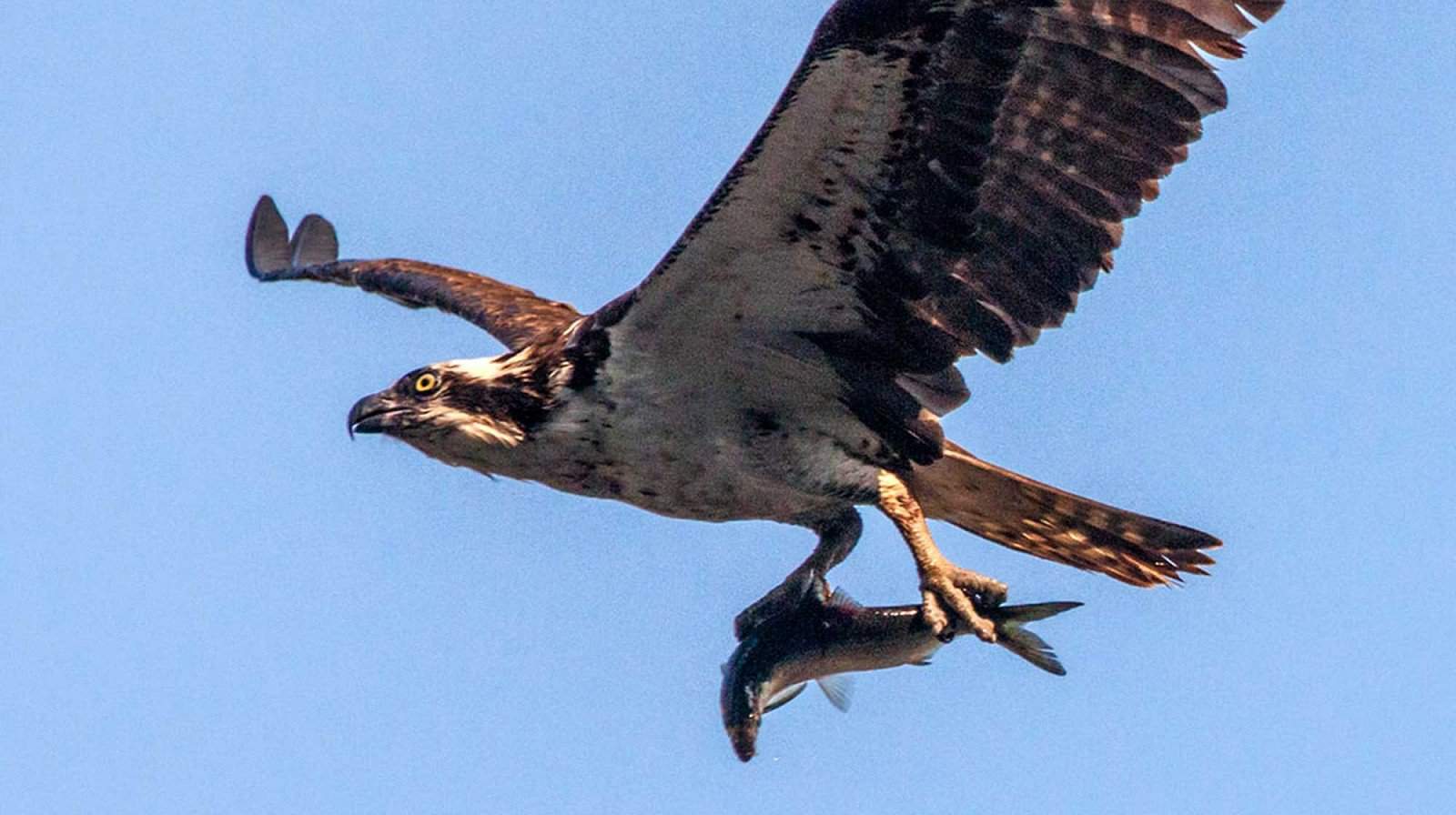 An osprey caught clutching an alewife in Woolwich, Maine.

Maine Coast Heritage Trust is proud to be a part of this effort. As our land conservation efforts evolve, we’re doing more and more to manage and care for conserved lands to sustain and enhance their ecological values over time. To do that, we can’t ignore quality of the water running along the shore.

If alewives are running, more wildlife can find more to eat. If alewives aren’t running, it makes it that much harder for animals, birds, and other fish to survive and thrive.

That brings us to nature’s ultimate lesson: it’s all connected.

Restoring the lifeblood of the coast

MCHT is protecting land in a way that recognizes these connections, which is why we launched The Rivers Initiative to protect and restore Maine’s coastal rivers—strengthening Maine’s ecology and food chains and thereby making the coast more resilient to climate change.

This Initiative is already underway in three key watersheds: the Orange (where MCHT recently conserved 2,352 acres to create its largest preserve to date at Rocky Lake), the Narraguagus, and the Bagaduce (where MCHT has partnered to improve fish passage at several locations).

The importance of alewives isn’t just ecological—it’s also cultural. These fish have always been a major source of food for Wabanaki people, and up and down the coast people continue to catch, smoke, can, and eat alewives, and use the fish for bait. Through alewife and river restoration work, Maine Coast Heritage Trust has seized opportunities to connect with more people and communities, and celebrate and share the importance of this sea-run fish to Maine’s ecosystems.

Last spring, Regional Land Steward Deirdre Whitehead collaborated with members of the Passamaquoddy Tribe to bring local students to MCHT’s Sipp Bay Preserve in Perry for a day celebrating the “fish that feeds us all.” The group caught alewives with nets below the fish ladder at the Pennamaquan River and transported the fish over the dam to the upper river, making it possible for these more alewives to continue on their journey.

Senior Project Manager Ciona Ulbrich spent the day at Sedgwick Elementary School making fish prints with students and teaching them about alewives and their importance in the food chain. She also helped organize and attended the 2nd Annual Bagaduce Alewife Celebration.

On May 18, 2019, hundreds of people—from newborns to ninety-year-olds—gathered at Pierces Pond in Penobscot to celebrate the return of alewives to the upper reaches of the Bagaduce watershed.

“People were sharing stories of how it used to be,” says Ciona. “They thought thank link to their parents and grandparents was gone. There they were, standing with their kids and grandkids, watching the alewives return in greater numbers. It’s this amazing natural phenomenon that we’re collectively helping to bring back. Conservation projects like this give people hope.”

Learn more about The Rivers Initiative