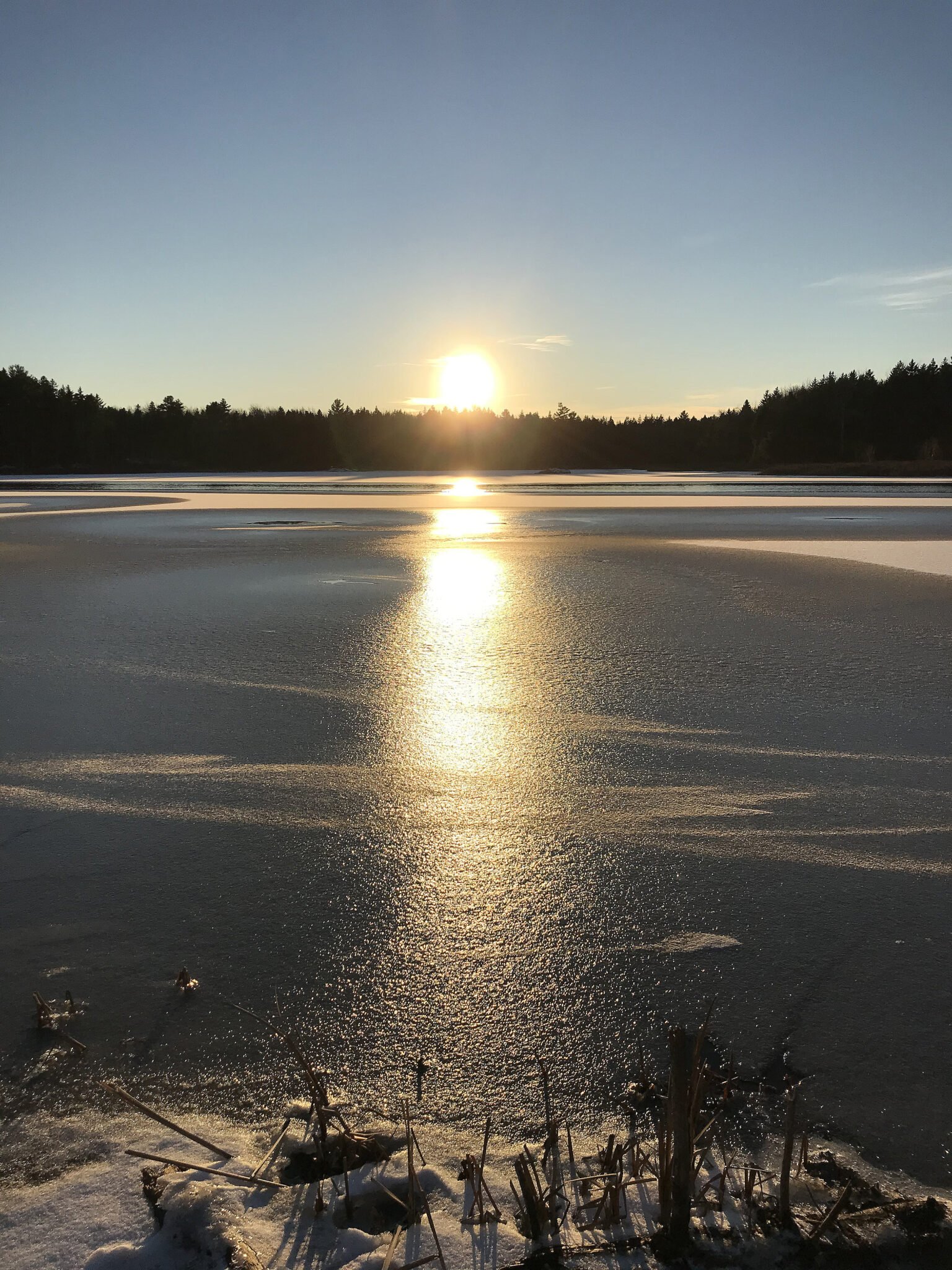 Sometimes I wonder about chainsawing. As a Maine Coast Heritage Trust steward, I mainly use my chainsaw for building and maintaining trails in an effort to provide safe human access to wonderful places.  To be honest, the cutting usually isn’t tricky, you could even say that chainsawing might just be my favorite part of the job. But I chainsaw in places where I know owls live and we’ve all heard the stories about how owls can hear a mouse’s heartbeat in a gale from whatever distance away and all that. Sometimes I think of how a group of hikers chit-chatting would sound to an owl perched close to a trail. Pretty loud I would think. But a chainsaw? That could be deafening.

Granted, owls can fly, or turn their heads away to catch the calmness needed for relaxing and snoozing.  The few hours my “raging saw” is roaring through a habitat is miniscule when compared to how much time an owl is in the woods.  The same goes for hikers; humans are loud when gathered in life and in the woods and any animal that can hear is aware of this and many will adjust their behavior enough to avoid crossing paths with humans. That’s why in my Owls Are Easy nature program I recommend when observers go owling that they go by themselves or with people they don’t want to talk to. As a species, we’re loud, we smell (some more than others) and we’re often not paying attention, so it’s easy for most animals to stay clear of us. Who can blame them, I love playing that game too!

Which brings us to tracking and the fisher in my back yard, the one I’ve been tracking around “The Marsh” for the past six winters. 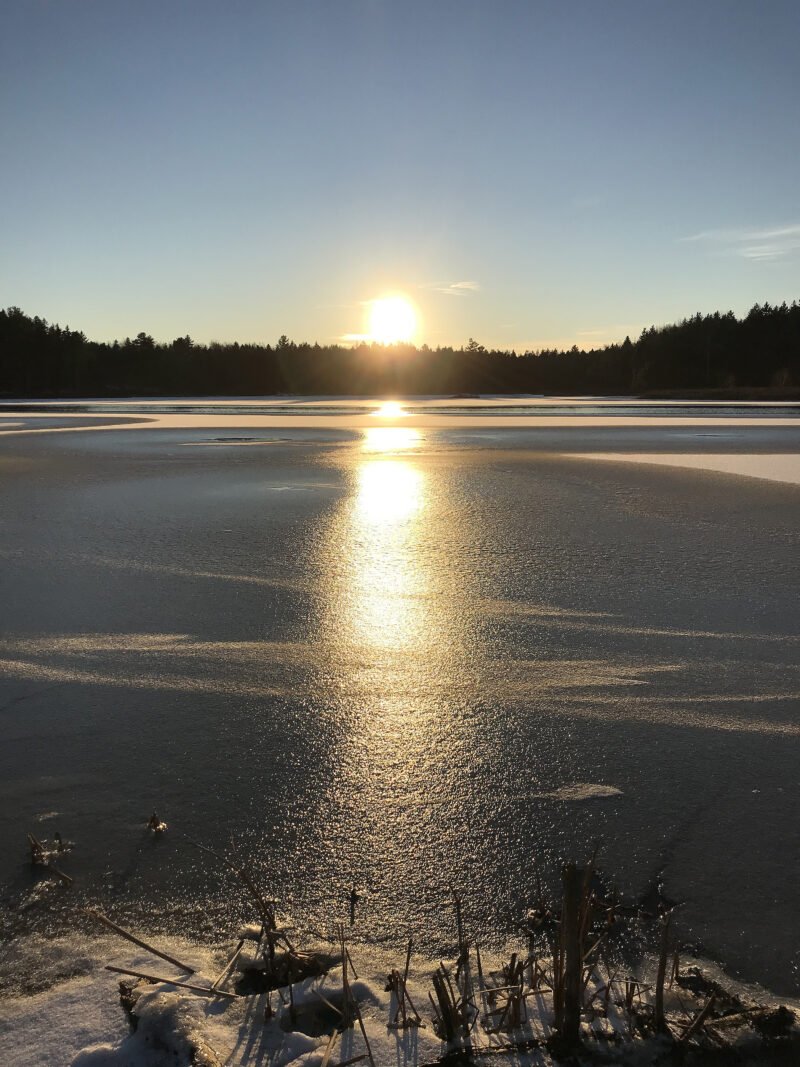 The reflection may look nice, but the ice is questionable.

When snow and tracks are laid out and ready to be observed I tend to focus on trails that cross the ice out back, the frozen marsh of St George. I’m not the only one who likes to get on the ice, as the tracks of deer, turkey, coyote, grey and red fox, bobcat, otter, fisher, and Colin (my neighbor) will attest. As a bonus, the animal trails on ice are usually in better condition and stay in better shape than those in the woods as there aren’t drips or clods of wet snow falling from trees above and messing up my tracks. No, the trails on the ice tend to be easy to find, easy to follow, and offer loads of lessons in a wide-open environment. If I only have a few hours, getting on the ice is going to be the choice. No brainer.

As of mid-January, this winter had produced little to no ice, and by ‘ice’ I mean frozen water that can hold a grown man of Estonian and Norwegian heritage, plus a cup of coffee. That’s the measurement I go by and it has not been met this winter. Many a full grown Estonian would have gone through the ice at this point. So with the ice maintaining a level of untrustworthiness, it has been back to woods for me.

Snow, in terms of quantity, has been a bit of a disappointment through December and January.  As of late January, we had one big storm and a few dustings since. Depending on the type of snow we get tracking in the woods can rate from sweet to disastrous. That being said, the snow in the woods out back has been surprisingly productive for tracks this year. For whatever reason, each snow this winter has offered multiple days of quality tracks and trails to follow, and no greater pleasure has there been than to follow a fisher, aka “the big fisher in my backyard.” As it turns out, I couldn’t be happier. 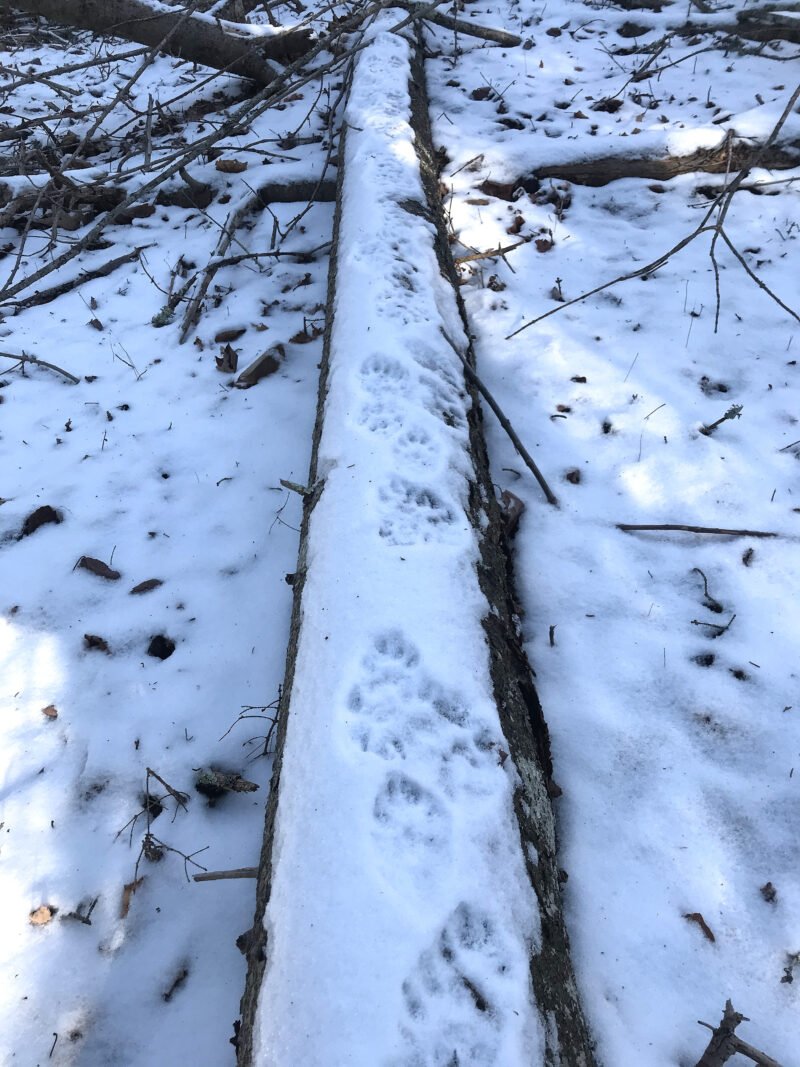 You see, years ago when we first moved to St George, we rented a place by the school. From that location just getting onto the marsh ice was tricky, especially when school was in session. In a never ending, but often failing, effort to not be the be “that creepy guy in the woods” I would find myself staying deep in the forest between the houses and the school, eventually making my way to what I now  call my backyard and back woods. What used to take 20 minutes to get to is now a minute walk out the back door. Location is everything! To make matters that much better, the back woods just so happens to be the first spot I picked up a fisher’s trail in the snow six years ago. Since we moved, most snows offer fisher trails out back to be followed, at least for a bit, before making my way to the ice.

With no ice this year the timing was right to really follow the fisher in the backyard.  I’ve followed fisher’s trail all over the back woods, the hermit woods, the nature trail, and the upper marsh woods. The trails have been full of information as the fisher hunted grey and red squirrels (becoming more of a hero with every squirrel taken) and followed a loose meander of wandering transects that essentially dissected the forest. One recent afternoon I tracked the fisher’s trail for an hour and a half and was never more than 10 minutes from my house! The fisher doesn’t spend this kind of time, quality or quantity, on the ice so every trail is a lesson both potentially new and mind blowing.  Or something like that.

One of the coolest (or least cool depending on how you look at it) aspects of following a trail is the scat you find. While tracks can tell you what the fisher was doing at that moment, scat lets you know what it ate before it got there. And this fisher has been eating apples. That’s right! And with only two or three neighborhood apple trees still holding onto fruit, it’s easier to get a feel for where its wandering has taken it. Let’s just say that fisher covers some ground. 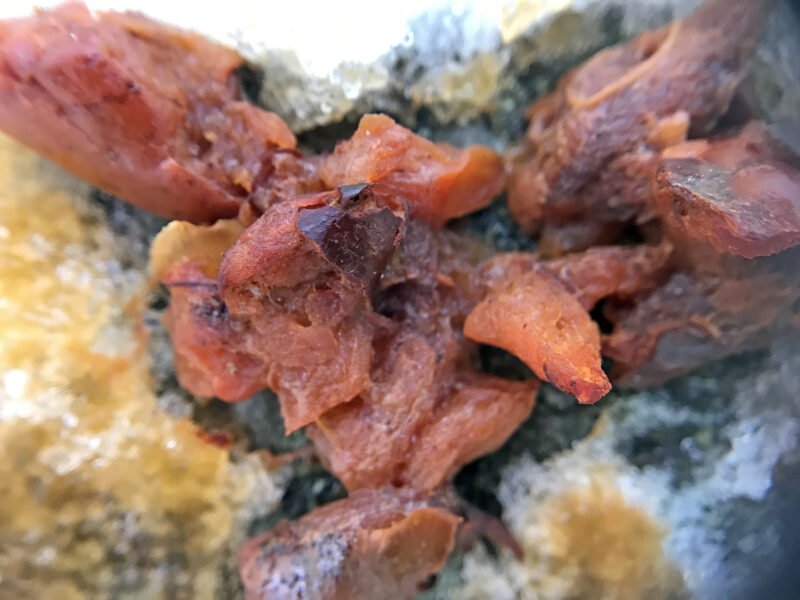 Fishers also love to climb and any fisher trail will eventually lead to a leaning or hung up tree that the fisher will climb up for a better view. A fisher trail may also lead to a plain old tree where it climbs and takes things into the canopy. That’s when the tracking can get tough. Tracking animals in the canopy can be challenging from all angles, but every now and then these vertical trails can be as educational as the horizontal ones. 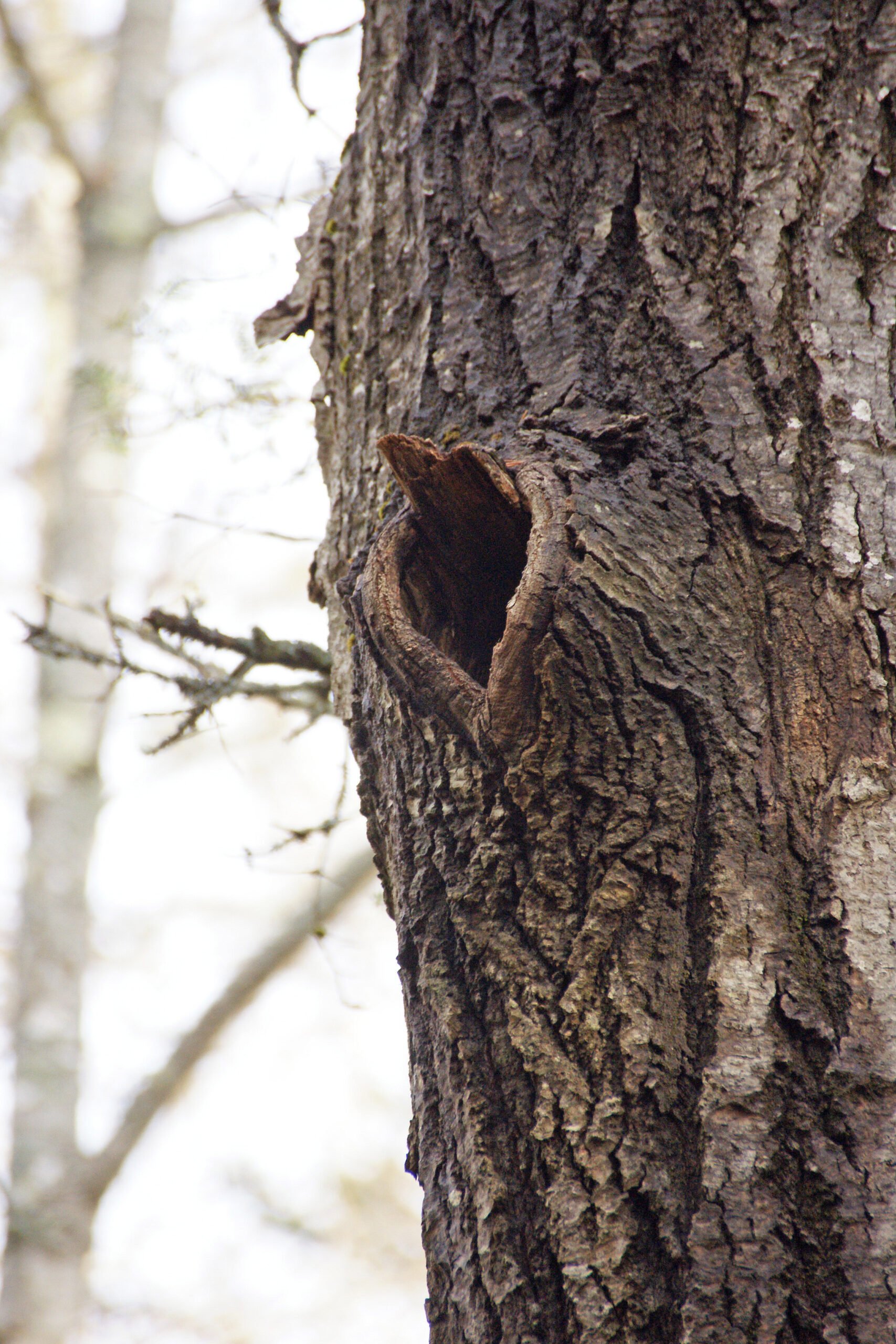 Recent trails I’ve followed have taken me to a good sized Bigtooth Aspen that I have been noticing for years. The tree is at least partially rotted in its heartwood, as is shown by a pair of cavity openings at about 20 and 40 feet up. Over the years I have been hoping/dreaming that the local Barred Owls would take up residence, but alas, not a pellet has been found underneath. The fisher, however, plopped a nice apple scat on the snow right at the base of this tree. This seemed out of character with the other apple scats it had been leaving – most of which were placed high on stumps or logs for optimal breeze carrying and territory marking. This one looked to mark the tree itself (one interpretation).  Do apple scats have character?

Then the snow melted, and the tracks and trails disappeared.  However, a return visit to the Aspen showed about a dozen scats that had been hidden in the snow, most of them full of fur.  This wasn’t just any tree; this was a den for the fisher and it very well might have been snoozin’ away while I stared up at the cavities.  I mean, I haven’t used a chainsaw under this tree, but I’ve certainly gone past it numerous times and been loud around it on at least a few occasions. I wonder if it recognizes my voice?  Recognizes my smell is more like it. 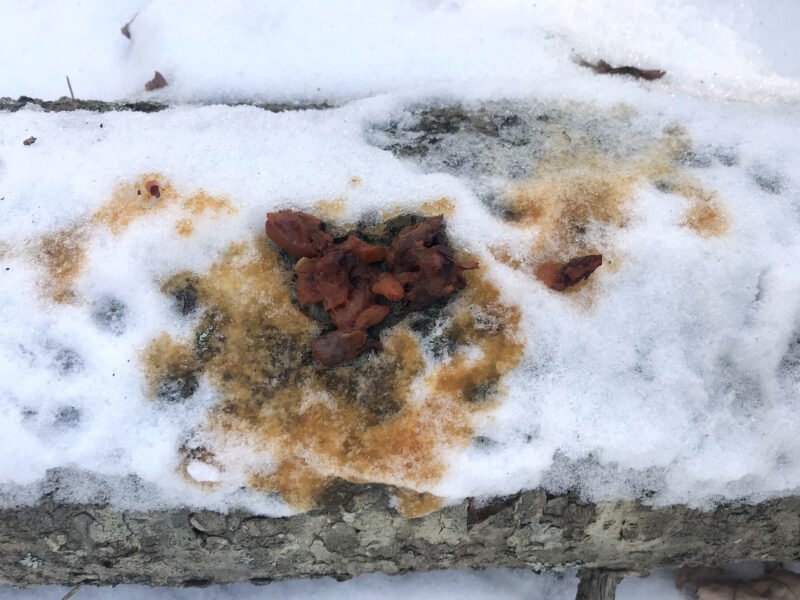 It has been humbling to learn that on my way to learn about animals I passed this large predator’s den hundreds of times. Maybe it hasn’t used it for that long; I certainly looked for owl pellets below before and didn’t see any scat. Whatever the case, I can already feel the change in my approach to the woods.  I look at every leaning tree differently now, and I focus on the Bigtooth Aspen and its cavities as I slowly make my way to the marsh. What used to take a minute now takes a few. I’m walking a little differently these days and I think it’s going to be that way from now on. Until the next thing shows up to slow me down even more. But until then my fisher radar (fish-dar?) will be on high alert and I’ll try and keep the sounds down even more. The things you do for love.