Maine Coast Heritage Trust and Brunswick-Topsham Land Trust successfully conserved Woodward Point in the spring of 2019, and quickly got to work readying the new preserve for visitors.

In the fall of 2019, writer Sandy Stott paid a visit to the preserve, and wrote about his experience in the Times Record.

Read an excerpt below, or see Sandy Stott’s full story in the Times Record.

We hope you see Woodward Point for yourself! Here’s more info, including directions.

I timed my drive from center Brunswick: out the Bath Road to Cook’s Corner; south on Route 24 to a left on Broad Road; then soon a right at the stop sign to the mile-long (please drive slowly) Woodward Point Road; follow signs for parking (which is limited). I hit a trifecta of green lights at Cook’s = 10-minute trip.

But I was intent on a more contemplative approach to this land, and so, after checking the mown trails and the Preserve’s signage, I drove a few more minutes and put my kayak in at the public launch at Buttermilk Cove, just off Rte 24 before the Gurnet bridge to Sebascodegan Island. A leisurely 40-minute paddle put me in shimmering waters just off the Point.

Two points really, in that Woodward has a western and eastern prong. The east, bordering on the New Meadows River is a thick, mostly-forested finger with huge conifers; the narrower western one helps shape Woodward Cove.

An inlet between the two prongs is dubbed the Bullpen, and on this high tide I could float in its serene, reflective water. Above me, a land steward was mowing the half-mile trail that runs through bobolink-rich meadows down to the end of the western prong. This mix of floating ease and industry seemed just the right harbinger of the season. Woodward Point is really two points, with a western and eastern prong.

As I floated and paddled back to the point’s end, I got greeting: an eagle lifted out of a pine, circled once, deemed me inedible (or hard to digest) and soared away; a kingfisher erupted from another tree and marked his fishing grounds with squalling; a blocky shadow, high in another pine shifted. Porcupine! I realized, even as it drifted back to daytime nap.

Round color caught my eye — there, rife with its fall fruit, was a shoreside apple tree. Pale apples bobbed in the water, ready perhaps to disperse to new shores, and the rest of this year’s crop bowed the branches down. I drifted in under the tree, reached up and picked a few. Taster’s note: sweet with a tang of salt.

And on: around the western point and down into Woodward Cove under a fringe of field-side trees and along a stony shoreline. The sound of the trail-mower above reminded me that, all summer, stewards have been opening and marking trails, and there are now 1.5 miles of walking paths on the Preserve.

Caitlin Gerber, Maine Coast Heritage Trust regional steward, led that summer work, and in an email exchange she reflected a bit on her time at Woodward Preserve:

“I think happening upon porcupines waddling across the fields just about every day this spring was really special. I grew up on a farm in New Gloucester, and I never saw porcupines meander so casually across an open area in that way, so it has really been a treat to see that, and so regularly! I’ve also really enjoyed watching the Preserve change as the seasons progress and as the grass grows… I should also say that it’s been a pleasure to get to know some of the neighbors who adore the property but have never really had a chance to explore, until now. And, I’ve had the opportunity to meet a couple of guys that clam/worm the mudflats below and it’s been really wonderful to be able to say, ‘of course you can keep using this, forever,’ and ‘how can I help make your life easier here?’” 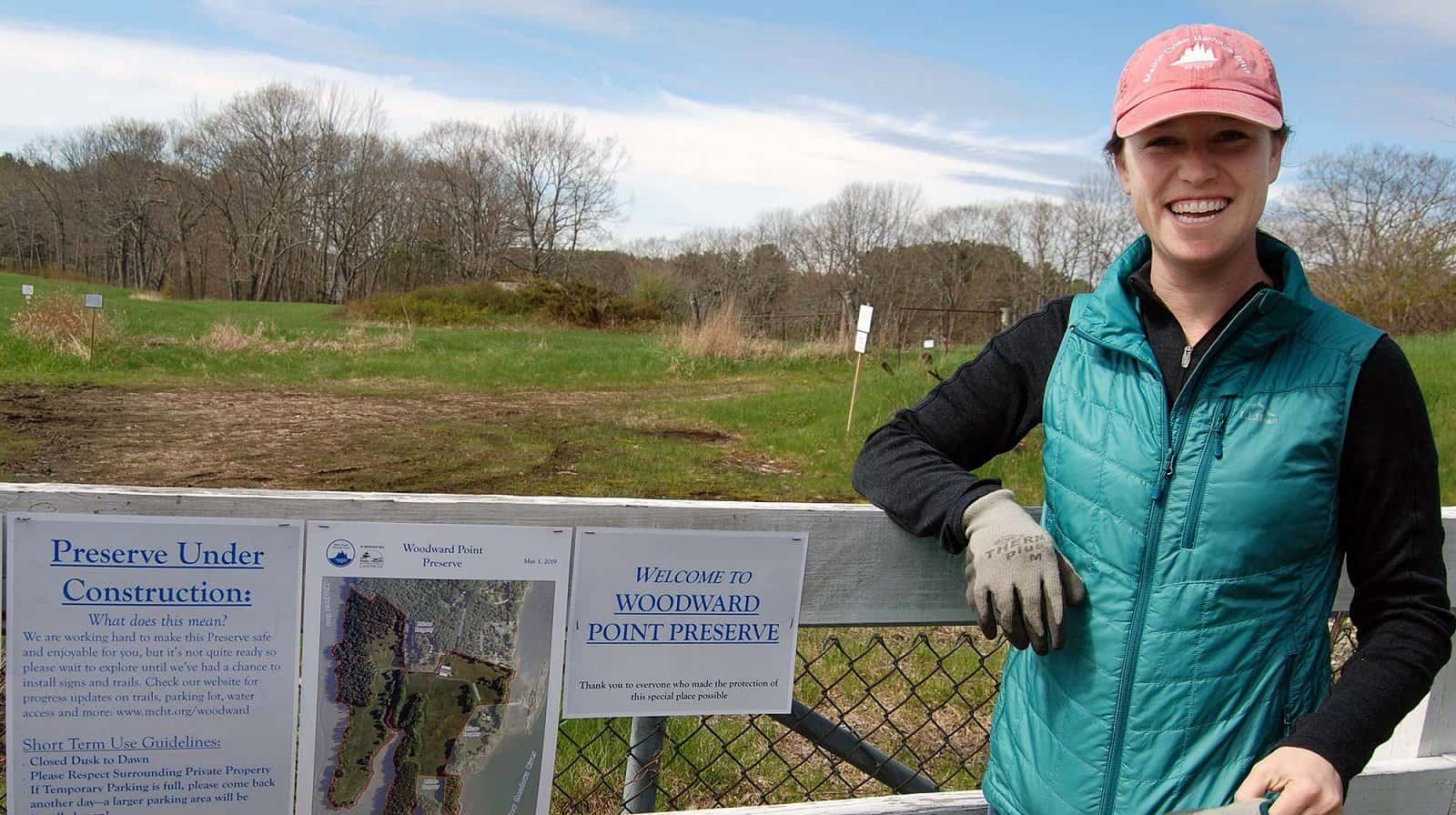 Two more moments from my visit stay with me: First, as I floated in the Bullpen, I heard the distinctive, sweet, late-summer chirr of insects. A little research suggested it as a chorus of crickets and katydids in song before frost’s quiet arrives. Also, over those minutes, I  watched a half-dozen solitary monarch butterflies cross over on their amazing migration toward the southwest. Both singing and migration seemed living imperatives; I felt infused by both.

Post-visit notes: I timed my visit to high tide so that I could float close to the land. At most tides, the Preserve is surrounded by shellfish-rich mudflats, and so, better seen on foot.

In keeping with the hope of embracing board public access to the Preserve, it is open to bow-hunting by permission, a season that opens on the 7th. As is true throughout Maine, it’s good to have your orange on for a fall visit.

If you approach by boat, it’s good to take the current beneath the Gurnet Strait bridge into account. At slack tide it murmurs only, but at mid-tide it can reach speeds of 5+ knots. Even an hour or so beyond high tide, I was fighting a 2-knot current as I paddled back under the bridge to Buttermilk Cove.

See the entire story in the Times Record.