You know how sometimes you visit a place over and over again and it gets better every time? (We touched upon this phenomenon in the last Nature Bummin’ column. Well, for me, Erickson Fields Preserve is one of those places. Every year I lead three walks there—a bird walk in spring, mushroom walk in fall, and tracking walk in winter. It’s worth noting that the last one was the best ever.

You may be aware of the community gardens and programs associated with Erickson Field Preserve and Aldermere Farm. Vegetables and cows bringing people together—lots of good stuff going on over there.

When tracking, the weather’s everything

The walks I lead at Erickson Fields Preserve are largely spent exploring the trail system and woods near the fields. And, as with any organized outdoor walk or event, weather plays a huge role in the experience.

For instance, freezing conditions on the morning of a walk may determine how many participants attend, or significant rains a few weeks before a mushroom walk can help the walk achieve stellar status. Weather events hundreds of miles away can even influence what birds turn up for a spring songbird migration walk. The latest winter tracking excursion was no exception.

Ice can be inconvenient—and pretty, too!

It was a breezy, 16 degrees when I met the group for the Erickson Field tracking expedition on February 8. It had snowed a great deal the day before, but in the afternoon the snow turned to rain, temps quickly dropped, and everything iced up. Conditions in the woods were crunchy rather than slippery, relatively safe for walking but not the best for finding detailed animal tracks. We take what we can get though, and the fact that a dozen participants turned out for the walk increased the odds that we’d find cool stuff. 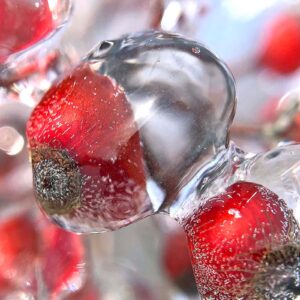 The ice ended up being fantastic, turning the despised berries of invasive Multiflora rose bushes into photogenic, attention-grabbing fruits. Ice-covered branches swaying in the wind, creating a cacophony of sound so electric the group just had to pause, listen, and appreciate the tones reigning down from above. In a word, it was cool.

We found some deer trails in the fields and followed them along an old rock wall before finding ourselves at the maintained loop trail in the woods.

The trail was full of tracks, a testament to how much use this public trail gets. It was even more impressive when you consider that the tracks had been made since about 4 p.m. the previous day. Great to see, but, selfishly speaking, the human and dog tracks made the wild animal tracking a little trickier…

Coyote tracks and where they lead

We took the trail up towards Beech Hill and found a coyote trail. The coyote trail was direct and focused, and it wasn’t hard to picture the coyote behaving all businesslike, listening and sniffing as it worked its way through the preserve.

We abandoned the coyote trail when we found another animal trail with a different pattern. The tracks were in pairs and the pattern went big left, little right, followed by little left, big right—on repeat. A trail like this could only be made by a four-legged animal that moves both front and back feet on the same side of their body as they walk—a “waddler,” if you will.

We lost the trail through some low shrubs only to pick it up again crossing a frozen vernal pool. The tracks were impeccably defined in the dusting of snow on the pool (had it not rained in this one spot?) and could only belong to a raccoon.

We quickly noticed that there were splotches of blood in some of the tracks. We followed the trail across the pond. The consistency and amount of blood made for very interesting tracking. We determined that once the raccoon left the pond area conditions rapidly declined. Its tracks and trail all but disappeared—all but the blood that is. Every few feet a bloody spot in the snow hinted at the non-linear path the raccoon had taken.

We totally got sucked into searching for one bloody patch after another (my kind of group!). It was the coolest tracking I’d ever done with a group—their smiles and excitement were contagious.

We followed the blood trail maybe 100 feet or so before realizing the raccoon was leading us away from our ultimate destination: the parking area. We decided to bid a fond farewell to the blood trail and head over to a known (to me, anyway) porcupine area. 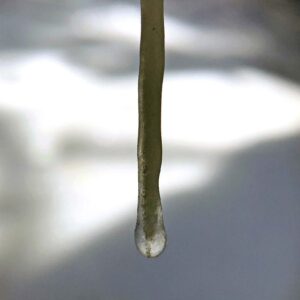 A porcupine quill, covered in ice

The tracks in the snow around the porcupine’s log den showed that the occupant rode the storm out inside and then ventured out after things calmed down. He/she was not in the den, so the group was able to take a closer look at its accommodations. We found an iced-over quill lodged in the wood at the den entrance. So cool.

We followed the porcupine’s waddling trail (a second waddler! two on one hike!) to a nearby stand of Eastern Hemlock trees, where little nips of freshly dropped hemlock twigs and needles were scattered on top of the snow.

Fresh scat and urine (don’t eat the yellow snow!) clued the group to look up and scan the canopy for the porcupine culprit (with mouths closed of course). It wasn’t long before a participant spotted the phat, little nugget of a porcupine far out on a hemlock branch. The entire group got to watch as it sniffed and then stayed in place. It was awesome.

When tracking animals we use the past (tracks, scat) to give us insights about the current status of our “neighbors.” Even when following a trail of bloody footprints, tracking usually sticks to the past and there is absolutely nothing wrong with that. Every now and then, though, tracking brings us to the present, and something just clicks when you see the animal in person, especially when with a group.

This walk was a magical meander through recent history, wrapping up nicely with the porcupine in the present. We were fully there and things were more than alright – they couldn’t have been any better. Erickson Fields forever!