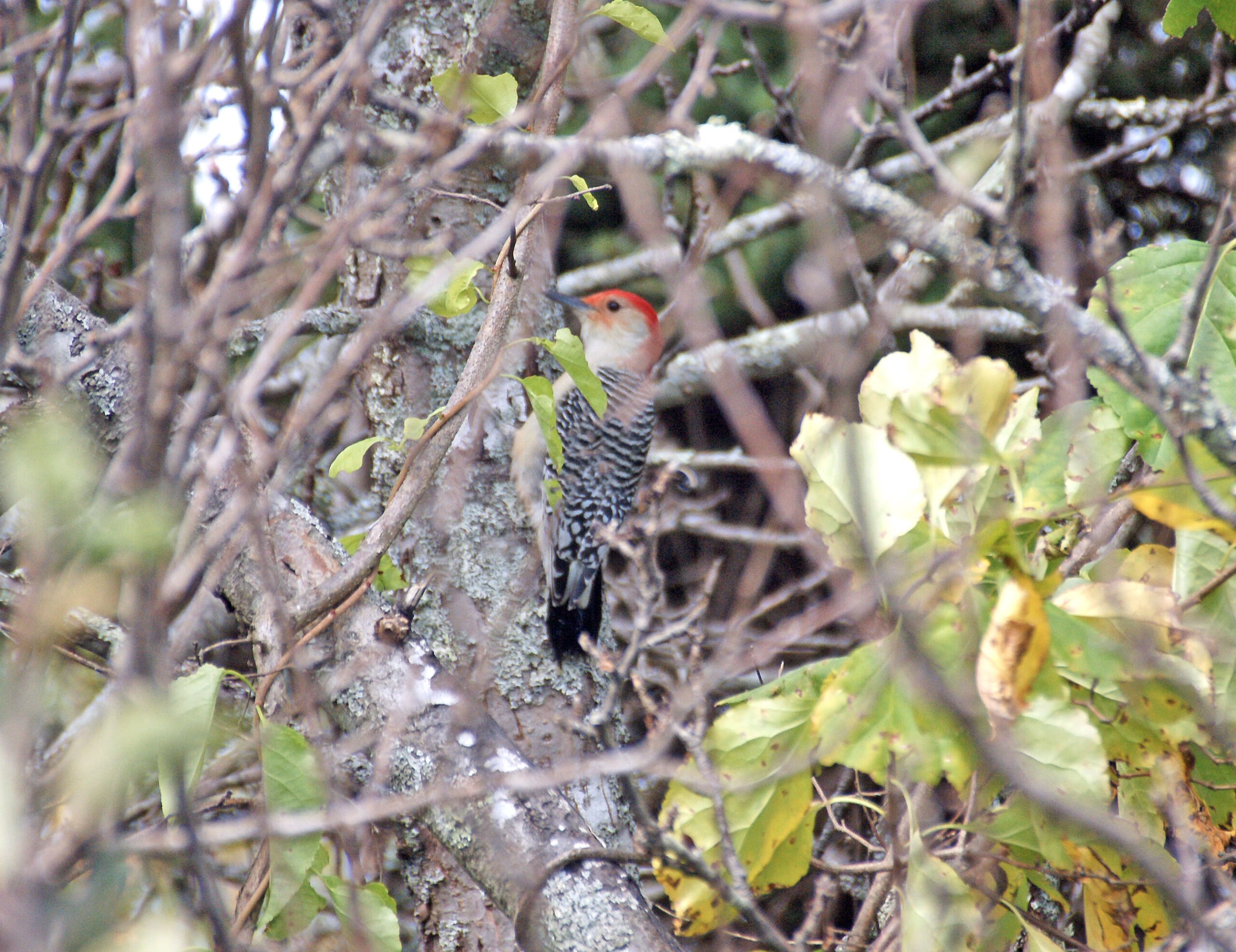 The Transitive Property of Trifectas

Fact: three is a magic number. Schoolhouse Rock! put those exact words to song, and then years later the hip hop trio De La Soul sampled it on their toe-tapping hit, “Me, Myself and I.” (Once De La Soul says something’s true you better believe it.)

Trifectas in nature observation, commonly known as Nature Observation Trifectas (NOTs) are wondrous events in part because there are no rules to what makes up a NOT. It’s left completely up to the observer (or observers) based on their own preferences and nature observation biases. I mean, I know bird people who don’t ever look for slime molds. Can you imagine? But even these types of observers can have their own trifectas.

So, NOTs come in all shapes and sizes. I like to group my NOTs into two categories: significant trifectas (SNOTs) and closure trifectas (CLOTs). SNOTs are exactly what they sound like—they occur when you see three things in nature that are significant to you in some way.

Maybe you saw your favorite three warblers on a walk or caught three types of cherished fish on an expedition. Or took three nature naps on a walk (that’s very significant). Years ago, while counting purple sandpipers between Vinalhaven and Damariscove Islands with Captain John Drury aboard The Fluke, we shared a very memorable SNOT. We saw Atlantic puffin, wood duck, and harlequin duck all in one day!

That said, trifectas cannot be forced. Sometimes, SNOTs pick themselves. Take the Vinalhaven Ferry ride for example. For me, no ferry trip in winter is complete without seeing these cool bird species: razorbill, lack-legged kittiwake, and purple sandpiper. That is the winter ferry trifecta for me, but there are plenty of other cool birds often spotted during the ride. So, where did this SNOT come from? Why not black guillemots, loons, and oldtails? That’s the power of the trifecta – what might be a SNOT for you might not be for me. (That said, we should always stay open to new SNOTs.)

Closure trifectas are more straightforward, but just as significant in their own way. In these instances, someone observes three plants, mushrooms, bacteria, etc. (the key point being that there are the only three members that make up such a group). Scoter ducks are a good example of this. Scoters come in three flavors: black, white-winged, and surf. It’s not unheard of to see all three scoters on the same Vinalhaven ferry ride in winter. Another bird CNOT? Jaegers, mergansers, and North American accipiters. And while there are probably countless other examples, CNOTs are, in my experience, less common than SNOTs. And so high fives are always given when that goshawk finally flies into view, followed by an emphatic “We closed out the accipiters!” It was c’nothing. CNOTs hit the spot!

This October, while biking (for work) on North Haven, I was entertained by a different kind of trifecta. The terrain and topography of the island makes it a little tough to get around. For one stretch, I was going slow enough to notice some seriously interesting preying mantis activity. The road seemed to be lined with them!

Some took off flying as I approached, their translucent wings struggling to pull their elongated bodies out of my bike’s way. Some stayed still by choice, and a third kind had no choice. The latter is the European mantis (mantis religiosa), which isn’t native to Maine (which makes roadkill mantis easier to accept). One gloriously non-crushed mantis posed motionless allowing me to photograph her before I continued on my way.

As I crouched down on the North Shore Road to photograph said mantis, I heard the familiar gurgling call of the red-bellied woodpecker. There was a lot of woodpecker movement at the time, and I had been listening for sapsuckers, hoping to get some last views before they headed south. The red-bellied was a nice surprise, not as rare of a sight in Maine as they used to be (not that that’s important) but still a species I hadn’t seen in a few years. Good memories of Ohio and Cape Cod started to percolate, and I thanked the mantis for stopping me, so I could take pictures and catch a view of an old friend.

A few days later I finally did hear a sapsucker close to my house in St George. I was working out of the clubhouse (aka the garage), with my ears open and my camera at the ready.  The sapsucker was calling from the apple tree 50 feet away, and as I approached a large bird flew out and into a nearby red oak. The look and flight pattern didn’t quite match a sapsucker, but I figured it might have had something in its bill or sap on its wings or something.

Then, another bird of the same build flew out of the apple tree and into the oak. I got a better view of this one and saw the reddish patches on its wings. Yellow-billed cuckoos? You betcha – one of my all-time favorites and another species I don’t often see.

Anyway, these two put on a nice show with multiple decent views as they methodically hunted from perches rather than actively gleaning along limbs as smaller songbird do. I didn’t realize until I looked at my photos, but the cuckoos were actually lunging at, catching, and eating mantis! I know: so cool to connect these two (but maybe not so cool for the mantis as they were getting macked on). 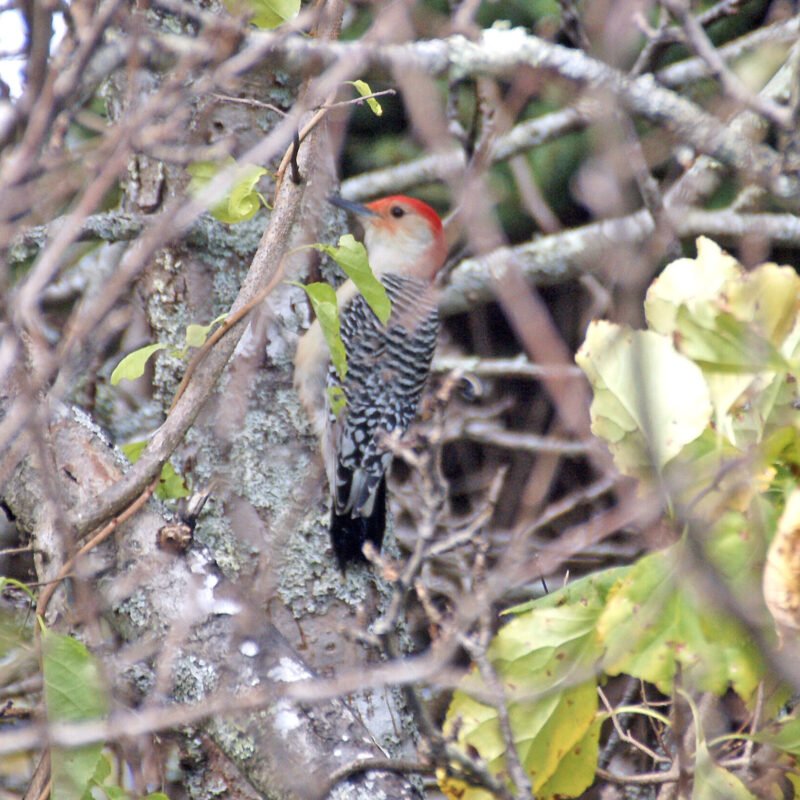 A few days later I came across another pair of cuckoos, this time while monitoring easements on Vinalhaven. Seeing four over the course of a few days felt good, but even more so when I realized I had seen four yellow-billed cuckoos total in the last 16 years in Maine. These two were eating caterpillars, and it took little time before my thoughts returned to the mantis and then to the red-bellied woodpecker. On the next property I visited I crossed paths with another red-bellied woodpecker!

Maybe there is more to trifectas, maybe there is less. Maybe this is all just a silly human mind game, and maybe that’s okay, so long as they keep happening. Because whatever gets you out there is a good thing, and I happen to be a big fan of trifectas!