Blue Hill Bay is rippled silk, aquamarine deepening to indigo on this warm afternoon in early September. The incoming tide turns the tip of Harriman Point into a pair of islets, the larger and more distant one crowned with spruce and bayberry twined with poison ivy, its smaller twin a narrow shelf of bare ledge thirty feet offshore. I lift my binoculars and scan the bay for birds while my husband Tom sketches, both of us perched on a scrap of gravel beach.

Suddenly, a flock of small shorebirds swirls down to the ledge. Another flock alights, and then another, until birds cover the rock. They carry a hint of winter in their silvery plumage, a spangling of gray, brown, and white. Semipalmated sandpipers bound for the northern coast of South America.

Tom closes his sketchbook and we leave the beach and ledges to the sandpipers. Soon the birds will be gone, but they leave behind a memory on the ledge: here is where feathered travelers rested their fine, hollow bones.

Earlier memories rise like the tide as we hike the spruce-shaded trail along the shore. Over the years, this wild little peninsula has become more than a place to us, more than mere backdrop. It teems with presence. 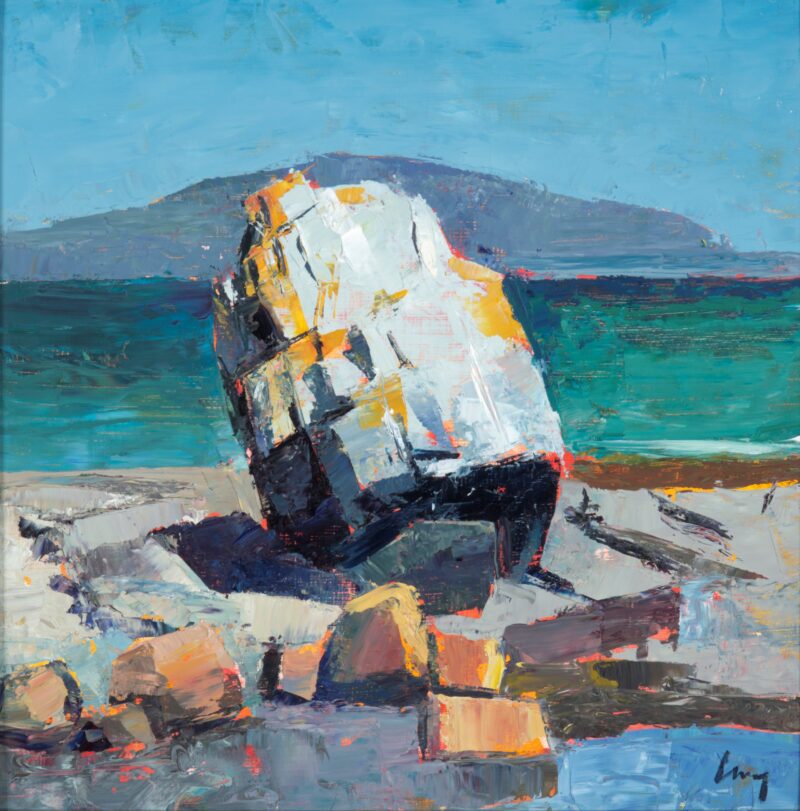 “This is where we watched the eagles,” Tom says, when we reach Eastern Beach. His words carry me back to a raw afternoon in early April when two bald eagles soared out over the water right in front of us and locked talons. They whirled and plummeted from the sky. Just when it looked like they might crash into the water, they released their grip and flew off together across the bay.

Off the next cove is where long-tailed ducks yodeled to each other across the icy bay. Along a little stream up the beach is where river otters frolicked in the snow on a frigid day in February, leaving it grooved with their slides.

We reach a glacial erratic perched on ledge at the edge of the gravel beach as if it’s watching Mount Desert Island hunkered on the horizon. The boulder offers a silent invitation: Sit. Be still.  I lay a hand on the boulder’s cool, rough flanks. My mind quiets.

The afternoon cools and shadows stripe the beach. We turn and take the trail back through the woods, passing an ancient apple tree growing out of a cellar hole. Memories rise at every turn. Here is where an American redstart, a black-and-red butterfly of a bird, shouted his sneezy song on a warm morning in May. He traveled here, to this decrepit tree on this bony thumb of land, from as far away as Peru.

At the junction of the trail is where spotted salamanders laid their eggs in a vernal pool on a rainy spring night, as they’ve done for millennia. Just beyond the pools is where a coyote watched us from the blue shadows as we glided by on cross-country skis.

It all could have been different. This teeming place could have sprouted houses instead of forest. But the late owner, Susan Drew, gave it to everyone. Now it’s a Maine Coast Heritage Trust preserve.

Kimberly Ridley is an essayist, contributing editor to Down East magazine, and author of award-winning nature books for children, including The Secret Pool (2016). She holds an MS in science journalism from Boston University.

Tom Curry is a graduate of RISD whose paintings are the subject of the book Island (2012). His work is represented in galleries including Artemis Gallery, Cynthia Winings Gallery, and Gleason Fine Art, and in his studio gallery in Brooklin.

SEE MORE VOICES FROM THE COAST