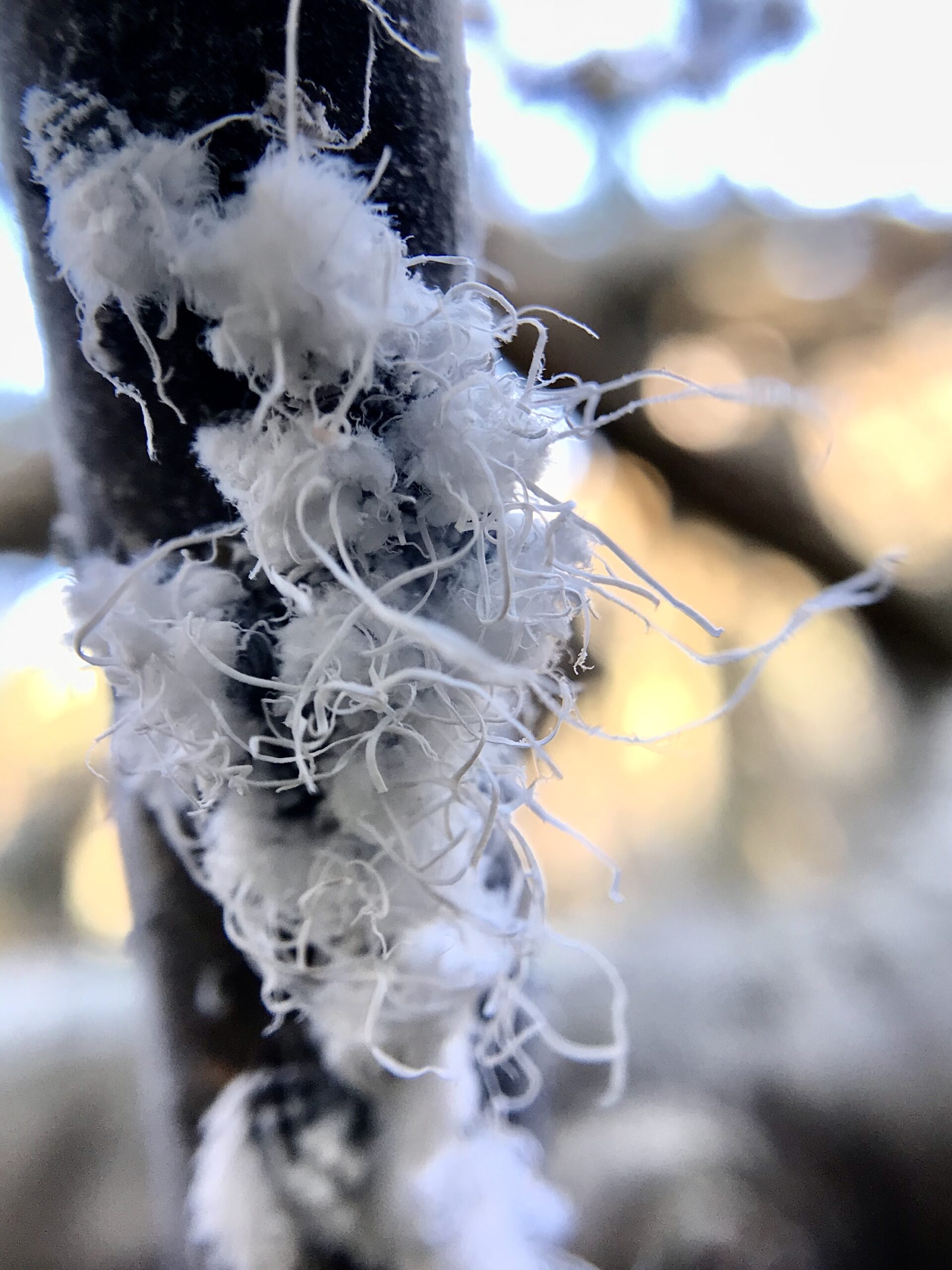 Woolly aphids
Stories from the Coast >

The Hunt for Woolly Alder Aphids

Everybody has something (or things) they hope to experience someday. It could be anything from seeing the northern lights to catching every green light on the way to work. Some of these desires are significant enough that one might put a “Before I die…” after them. One might then group these together into a bucket list.

A big difference between a regular list and a bucket list is that the latter has added weight and pressure to it. Maybe the items on a bucket list are once-in-a -lifetime events that you have to save and plan for, such as skydiving or fishing in Alaska. Here’s a thought: are you supposed to feel bad on your deathbed if you missed something on your bucket list? I’ve always wanted to see a wolverine in the wild, but if I don’t see one before I die, I’m not going to feel like my life wasn’t complete. Anyway, making a bucket list has always been way down on my list of things to do. Until recently.

A few Nature Bummins back I mentioned my friend Hillary, woolly alder aphids (WAAs), and how a photo she had sent to the Vinalhaven Sightings Report had led to my actively searching for this particular species of aphids. That’s right: it took a bunch of nights but in the end I became an aphid hunter almost overnight. My hunt for woolly alder aphids was partially supported by good timing. We haven’t seen nearly so many mushrooms this fall, so I was ready for a new distraction. 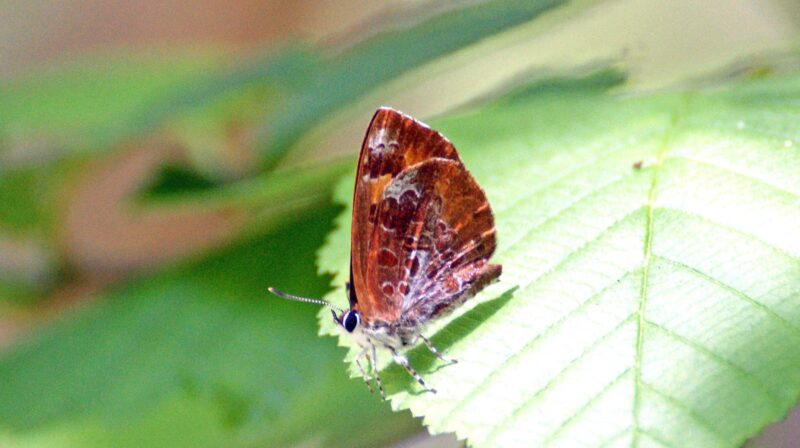 And so, I found myself searching alder thickets in October and November. For those who don’t spend much time in alder wetlands, it’s not necessarily a pleasant experience as far as traversing a habitat goes. It’s wet (what part of wetlands did I not understand?) and the thickets are a tangle branches and limbs inclined to yank and remove hats. Such hat removal events are quickly followed by the bellowing of inappropriate (some would say) language.

In full disclosure and all honesty, it wasn’t the aphids per se that got me out looking. Nope. It ends up that the aphids attract North America’s only carnivorous butterfly–the harvester–whose caterpillars happen to feed on aphids! The fact that I saw an adult harvester butterfly at Maine Coast Heritage Trust’s Clark Island Preserve made this whole situation feel like destiny. My spider senses were tingling, how could I not pursue? And just like that, the search was on.

Each spring I spend a chunk of time searching alder zones for vernal pools, and in winter it’s fun to track fox and other predators who like to weave and hunt their way through the zone. Frozen or full of eggs are the times I experience alders the most. And so, I was in a familiar habitat in an unfamiliar time of the year, which means the lessons were pretty constant. The aphids have a look similar to crustose lichen, so taking the time to closely inspect the alder limbs increased the chance of finding a colony. 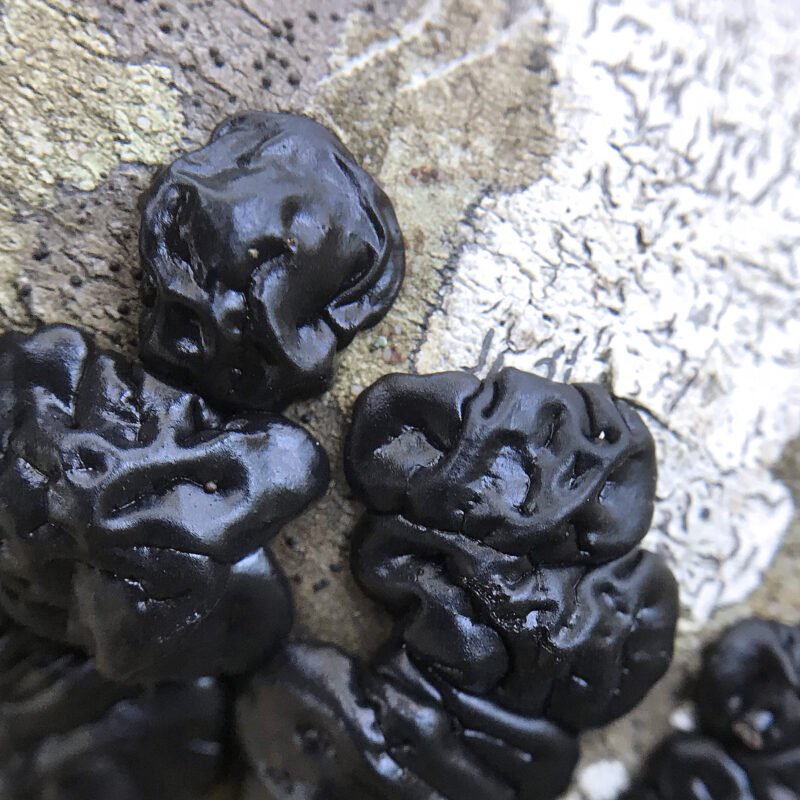 Of course, through closer looks I found not only aphid colonies, but also a flush of jelly mushrooms that I would have missed, and have missed for years by simply not cruising this habitat. Black jelly roll (Exidia glandulosa) was everywhere! While the deciduous-plant loving witches butter (Tremella mesenterica) took the place of the ever presently abundant, and coniferous-favoring orange jelly (Dacrymyces palmatus) that I usually see in the woods I frequent. While not technically jelly mushrooms, purple jelly drops (Asocoryne sarcoides) were fun to find as well and yellow fairy cups (Bisporella citrina) added even more color to the alder world. Man, I do love mushrooms.

Probably the coolest thing (judgment) found in the searches were patches of gummosis on an old fruit tree mixed in an alder patch. What is gummosis? Well, it’s a nonspecific condition where excessive amounts of sap leak from a wound in a tree.

The gummies were stunningly photogenic (judgment) in form and color, somewhat reminiscent of huge, oversaturated tree ear mushrooms (Auricularia auricula). A friend of mine even dug up a sweet soup recipe that calls for gummosis! It also calls for rock candy, so we opted to not soup it up at this time. I guess I haven’t spent much time around fruit trees, this gummosis stuff is cool! Though not for the tree, I suppose….

In the end I found a few populations of the woolly alder aphids, both on Vinalhaven and closer to home in St. George. I realized pretty soon that I was probably too late this year to see the harvester caterpillars I was dreaming of.

I did learn a lot about the aphids and their colonies, and will start my search for populations earlier next year. The aphid colonies I revisited remained in their exact locations all fall, literally sucking the sap out of the alders. Locating aphid colonies in the summer may be the answer, when harvester adults are active. I’ve never said this before, but I can’t wait for summer!

So my bucket list is a list of one–seeing harvester caterpillars munching on aphids. Why? Well, after a few decades of knowing about harvesters I am closer than ever to actually seeing their carnivorous caterpillars going in for the kill. And for some reason I really want to see that, like really want to. Gummosis soup is not on my bucket list, however. Maybe someday, but at this point it’s a one thing at a time kind of list. Maybe seeing harvester caterpillars will be the new normal. Wouldn’t that be something…