“Land steward” is a job that comes with impressive amount of bonuses (bonusi?). For me, the biggest perk is seeing properties change over time. It could be a meadow absorbed by a forest, a log going back to dirt (thank you FBI!), or a new woodlands arising from an historic blow down event.

Becoming familiar with a property also means getting to know its inhabitants. A trick of the trade I picked up over the years is to, whenever possible, time work projects to coincide with nature events at a preserve.

An example of this is my saving a chunk of trail work for each June so I can see the impressive bloom of pink lady’s slipper orchids at the Huber Preserve. Mid-to-late May means songbird migration, so I plan work at Lane’s Island and in The Basin Preserve where I am more likely to cross paths with the avian movers. Let’s face it: scheduling work around nature is cool.

This April and May I had fun with bridging and trail work in the Basin Preserve. For a bonus, this set of projects put me in close proximity to a wonderful vernal pool system. 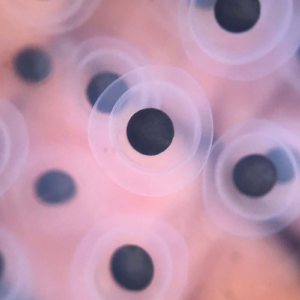 At this point I will presume that those who have been reading the Nature Bummin’ column have a basic understanding and appreciation for the unique habitat that is a vernal pool, and how several species of amphibians and fairy shrimp depend on these pools to breed. Not to blow things out of proportion, but their next generation literally counts on the existence of vernal pools.

Identifying amphibian egg masses in vernal pools on Vinalhaven is easy as they are all from spotted salamanders. It’s a wood frog-free island! And so we learn about salamanders… 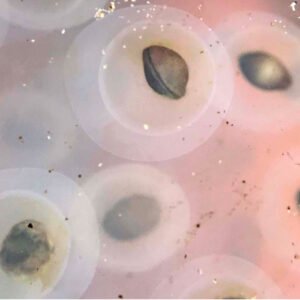 Last year my wife, Amy Palmer, gave me a gift that keeps on teaching: a clip-on macro lens for my phone. With this new tool in hand I decided to take photos of the same salamander eggs in the pools over four weeks. At the time I write this they still have a ways to go to hatching, but watching the salamander embryos develop and unfurl has been a blast so far!

One noticeable change was an increase in the presence of green algae within the eggs. Once the embryos started to open, or go into the “happy clam” stage, algae quickly replaced the bluish tint of egg masses with a greenish wash. I did not know how cool this algae was, or that algae could be cool to begin with.

It didn’t take much research to find out that this algae is known as salamander algae, or “Oophila amblystomatis” wherever old Latin is spoken. The scientific name can be directly translated to “loves salamander eggs.” No foolin’, cross my heart, and all that.

You see, Oophila amblystomatis is only found with spotted salamanders. And not just in the eggs, but in the salamanders themselves! There was a lot going on in that algae!

Identifying a critter or mushroom or plant is great, but it’s also enjoyable to go beyond identification. Be it predator and prey, a parasitic flower, or symbiotic lichen, finding signs of natural relationships are fun.

We especially like seeing symbiosis, an interaction between two different organisms living in close physical association, typically to the advantage of both. In the case of the Oophila and the salamander there are two types of symbiosis going. It’s a win-win-win-win!

The algae and embryo sharing the eggs is an example of an “ectosymbiotic” relationship, where the alga actually lives inside the salamander cells. Nitrogen-rich waste released by the developing embryo acts as algae fertilizer, and the algae provides the salamander with oxygen and sugars (classic photosynthesis!). Everyone benefits, as well they should in all good, symbiotic relationships.

The algae enters the embryo’s tissues and will remain within the salamander cells after it hatches and goes through metamorphosis. The relationship continues to be symbiotic but with an “endosymbiosis” dynamic as one symbiont lives inside the other. This essentially turns the spotted salamander into a photosynthetic animal. This is the world’s only known endosymbiotic relationship between a vertebrae and microbe! Cool, huh?

A little stressed out

In full disclosure, much of the algae within adult salamanders is stressed due to a lack of sunlight and thus turns to fermentation for energy. This a less efficient strategy than photosynthesis, and for a stretch—maybe for several years—the algae is doing little more for itself than surviving. 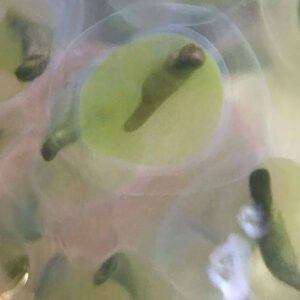 But survive it does, and if the name of the game is passing on genes, it’s as successful as freshly laid salamander eggs containing encrusted algae cells! The next generation of Oophila dependent on and thriving in vernal pools! Algae rocks!

I easily could have missed the news, but I am not familiar with societies or conferences created in the name of algae. There is undoubtedly a group called Friends of the Spotted Salamanders but where is Friends of Oophila Amblystomatis? We might have to start our own group down the road, but until then it was fun to see and learn the tale of the algae and spotted salamanders.