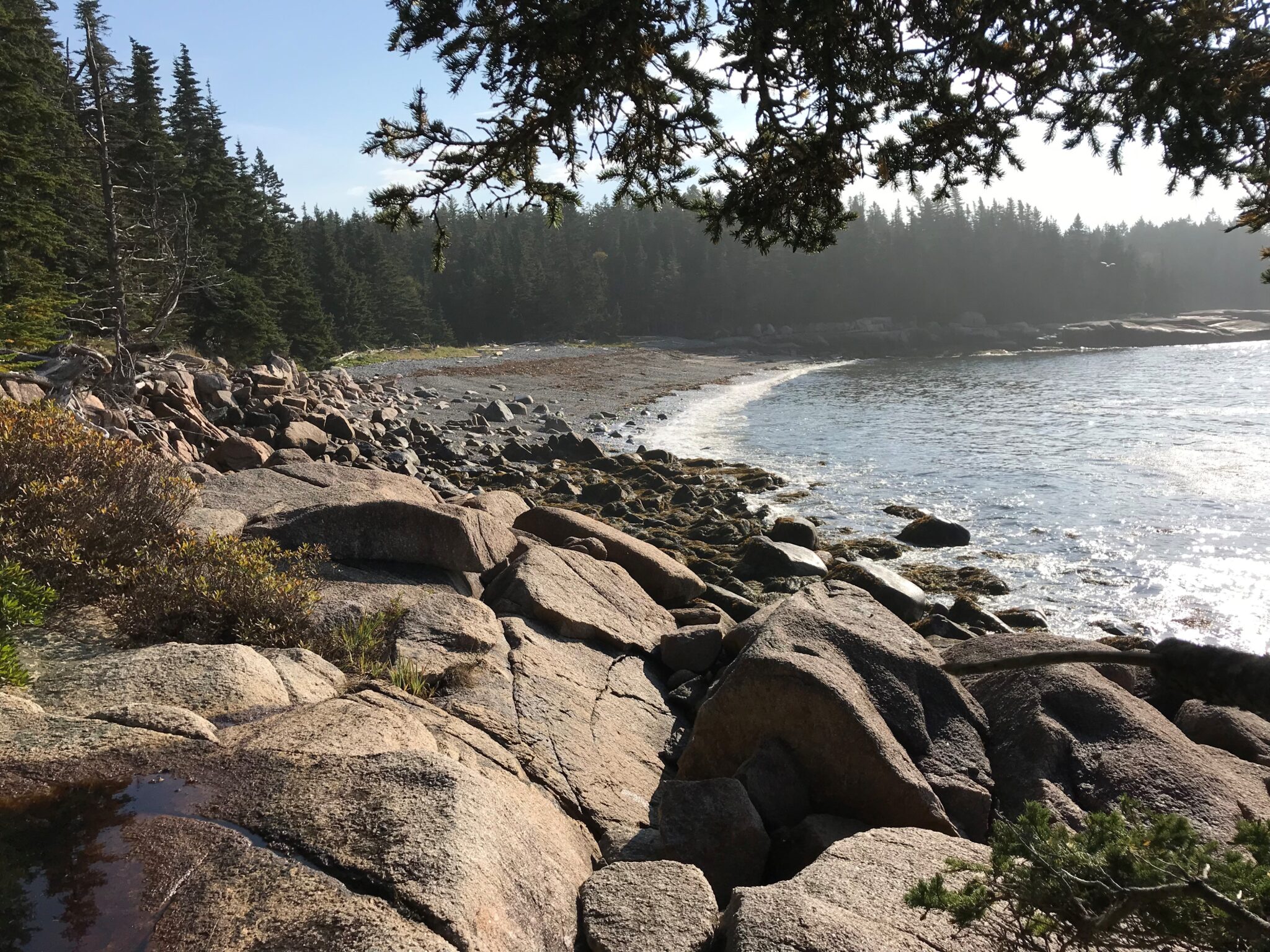 The Conservation of Seaduck Point

Nancy Sullivan grew up spending her summers on North Haven, often adventuring with her father to nearby Vinalhaven, where he owned some land, including a couple of islands.

Despite her adolescent indifference, her father would point out the birds he saw on that striking granite shoreline. He eventually donated that land to the Nature Conservancy, “So I always had that in mind,” says Nancy.

Land of one’s own

Nancy’s father passed away when she was in her twenties, and with inherited money she went looking for her own bit of Maine land, first in the midcoast and finally in eastern Maine.

On Beals Island she found it: a shorefront property of tight spruce forests and soft, hummocky ground, with smooth granite ledges lining the shore, a pebble beach, and a small island connected to the mainland by a sandbar.

Working as a schoolteacher, Nancy was able to spend entire summers with her children in the property’s scrappy homestead without electricity. When she and her husband weren’t fixing up the house, they’d row to nearby islands, tend the vegetables gardens they grew in the backyard, and go to local little league baseball games and to Machias for the movies.

The preserve offers much to admire, including bogs, spruce forest, and a cobble and sand beach.

Nancy’s life took many twists and turns over the decades, but summers on Beals Island were a constant. When she was around fifty years old, it started to bother her that she could not name the various types of jellyfish and other life she saw at the water’s edge, and she returned to school for her environmental science degree.

The systems she studied in the classroom came to life for her on Beals. She came to understand how the heaths (also called bogs) filter the water that goes into the aquifer, the local water source, and found new appreciation for the puffs of cotton grass that arise every spring and other unique plants growing in the acidic environment.

When the taxes got to be too much

“The taxes were manageable until they weren’t,” says Nancy. Eventually, she knew she needed to sell some of the land (bit by bit, Nancy had acquired nearly 300 acres), but she had concerns.

During the time she owned the land and likely long before that, members of the Beals Island community had used it, and she didn’t want it to be entirely developed and shut off to the public.

And while she knew intimately and cared deeply about the ecological value of the land, she was hesitant to conserve it in its entirety and cause the town to lose that critical tax income.

Nancy Sullivan and her husband worked with Maine Coast Heritage Trust’s Project Manager Patrick Watson for years to find a creative solution, ultimately striking a balance between development and conservation.

They decided to put up for sale several outstanding waterfront parcels, and also set aside land in the old farm field that could be developed at a later date, thereby sustaining the majority of the town’s property tax income. She also donated 168 acres to Maine Coast Heritage Trust, including the beloved beach and rich interior of habitats.

MCHT land steward Deirdre Whitehead cares for conserved land on the north side of Cobscook Bay along the Washington County coast, including islands. Seaduck Point was added to her portfolio after its conservation in the fall of 2018.

Now, the organization is working to turn this singular property into Seaduck Point Preserve, a place free and open to the public to explore and enjoy.

Creating a preserve is so much more than blazing trail and putting up a few signs. It is a years-long, collaborative process that involves many people—from MCHT’s local land steward to contractors to the former landowner to neighbors and users of the land in the local community.

Soon after conserving a place, MCHT creates a first-year management plan, and conducts a natural resource inventory to make note of the flora, fauna, and special features. This establishes a baseline, and helps guide management decisions moving forward.

In most cases, stakeholder meetings are held, inviting local people with an interest in the land to exchange thoughts about current use, management concerns, and ideas.

Input from those who know the land and surrounding community intimately is invaluable. But it’s also crucial for land stewards to spend time on the land, walking, looking, listening, and learning, in real time, through their own lived experience.

The last time she visited, she’d been on snowshoes. This time, instead of snow, electric green moss and lichen coat the forest floor. She collects herself in the driveway, readying maps and tucking her hair into her MCHT baseball cap. She’s taking in her surroundings, plotting her route. Her goal on this walk is to get a better lay of the land and its property lines, so that she can begin to plan for the trail system.

Countless factors go into making a good trail, and over the course of a few hours, Deirdre names many of them.

She considers out loud the location of the school; the contours of the land; the location of unique ecosystems, fragile habitat, and wet ground to be avoided; the best views and most interesting rock formations to highlight; the people using the trails (in this case, likely many families) and how the trails might be built to serve their needs while protecting the natural integrity of the land.

One of the preserve’s most stunning features is its cobble and sand beach flanked by smooth granite ledges. Adjacent to the beach is an island connected to the mainland by a sandbar.

“An enjoyable, and relatively direct trail to this special spot is key,” says Deirdre. She plans to learn more about how locals use the beach now, and if it has special importance to the community.

Walking along the beach, Deirdre notes evidence of severe erosion and the many pounds of trash stuck in among the rocks and shoreline vegetation, which will need to be hauled off the property—likely on boats since it would be a challenge to carry all that trash back to the distant trailhead.

“There is an opportunity for a nice community event,” says Deirdre. “It’s something we’ll have to do every year—the trash will keep on coming.”

Deirdre emerges from the woods and heads back to her car as the sun and temperatures start to drop. “I won’t make any big changes too fast,” she says. “I’ve learned it’s best to put in the time getting to know the community and getting to know the land myself. Every community is unique, and every place is unique.”

Deirdre will be taking many more trips to Seaduck Point in the months and years to come. She will learn what she can from Nancy and her family. She will attend meetings, and ask around about the land. And she will put in many days of hard labor, building and clearing trail, and hauling out garbage. There is still a good deal of work to do to ready the preserve for the public. We’ll keep you updated on our progress.

Presented here is one small sliver of this land’s long history: the decades Nancy Sullivan and her family spent loving and caring for and eventually conserving this place, followed by more recent months of transition.

Much is uncertain about the future, but it’s nice to know that Seaduck Point is now forever protected. We hope you’ll pay a visit, and join us in caring for this special place in the years and decades to come.