What are you looking at?
Stories from the Coast >

The forecast for December 23rd called for a three-hour window of calm between the previous night’s snowfall and the arrival of rain and temperatures over 32 degrees later in the morning. Predictions like this call for the obvious: track hard before the snow and the stories melted away.

So off and onto the marsh I went. On the ice I crossed several “soft trails” (not an official term) left by critters that were active before the snow and winds had settled. To me “soft trails” are ones lacking in detail, trails reduced to fragments separated by long stretches of nothingness where even the direction of movement can even be hard to decipher. Soft trails can be tricky, frustrating (if you let them win), and fun (if you win) to follow, but they are always informative (often informing that you are not that good at tracking). But sometimes it’s all you’ve got to work with. When life gives you soft trails…

It was a super fresh fisher trail, with tracks so detailed I knew it couldn’t have been more than an hour or two ahead of me.

After a bit, I hooked up with an extremely soft otter trail and was able to piece together the route it took to a latrine I monitor about a quarter mile away. The trail was a dead end from there—winds had apparently kept trail fragments exposed on the ice but whatever woodland routes the otter took were completely gone (what I refer to as a “no” trail). With the tracking window starting to close, I decided to sweep the marsh shoreline in hopes of finding any other otter sign.

While pootling along I spotted what, from a distance, appeared to be a very fresh deer trail just a little off in the woods. Visions of steaming deer scat photos danced in my head, so I paused my shoreline sweep for possible poopy photo opportunities. As luck would have it, it was no deer trail at all. Instead it was a super fresh fisher trail, with tracks so detailed I knew it couldn’t have been more than an hour or two ahead of me. The fisher and I were active in the same weather window and this one might have even seen me (or more likely smelled me) as I was working the soft trails on the ice. I bailed on the otters immediately to follow the fisher. 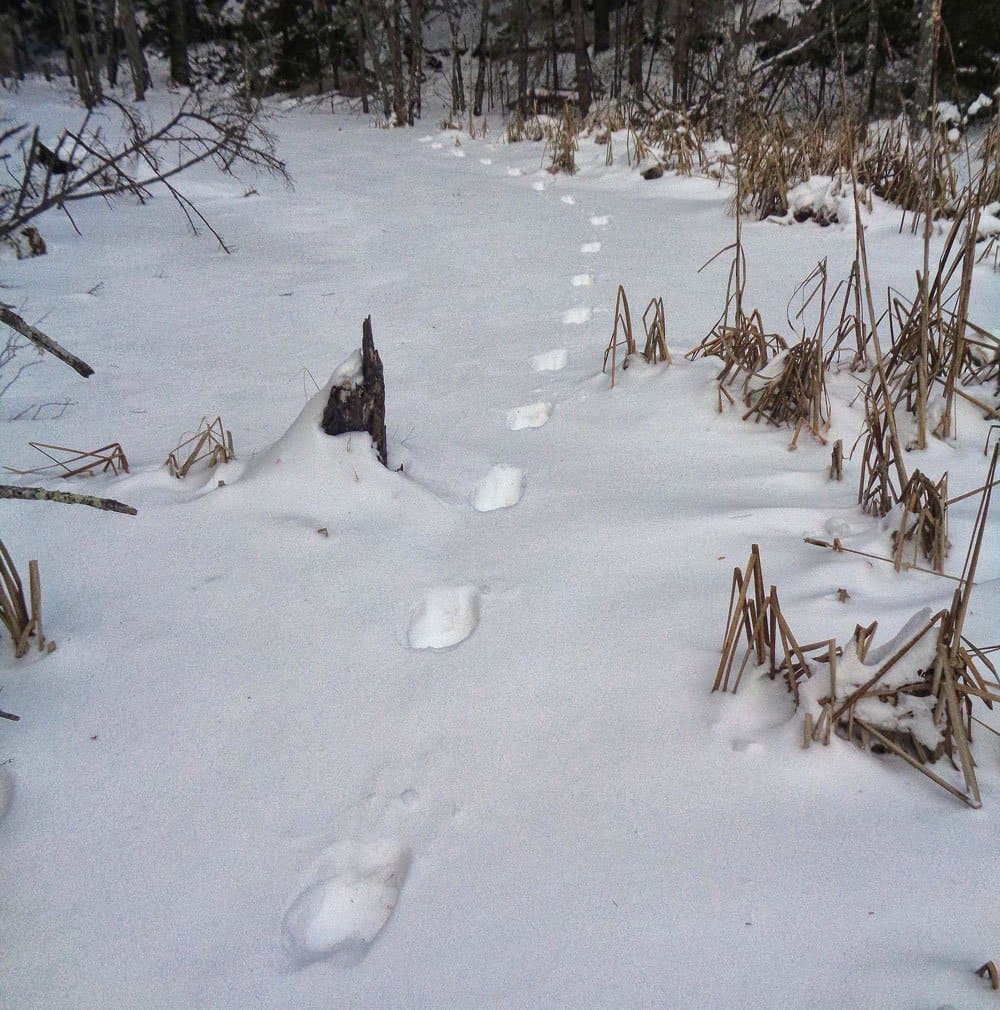 The fisher’s bounding trail revealed it had taken a determined and focused jaunt through the woods, stopping only a few times to mark stumps with urine or to roll its soiled, and presumably stinky, body in the snow. Figuring (hoping, really) this trail would end at a den, I followed quickly as the temperature started to rise. And while the trail certainly would (eventually) end at its home sweet home, at the half-mile mark (more or less) the fisher stopped for a meal of dead, male white-tailed deer carcass partial buried in snow. The fisher had obviously feasted here before… A good chunk of the buck’s rump had been removed and the trail was so directit had certainly been there before and most certainly return. Yes, it was like a dream come true.

The fisher’s bounding trail revealed it had taken a determined and focused jaunt through the woods, stopping only a few times to mark stumps with urine or to roll its soiled, and presumably stinky, body in the snow.

Time was slippin’ and the rain was drippin’, so I zipped home to get my trail camera and my wife (not necessarily in that order) and then booked it back to the carcass to aim the motion triggered lens at the fisher’s future feast. We were spending the holidays with family and were to return late on the 29th. Six days to document carcass visitors. Perfect. 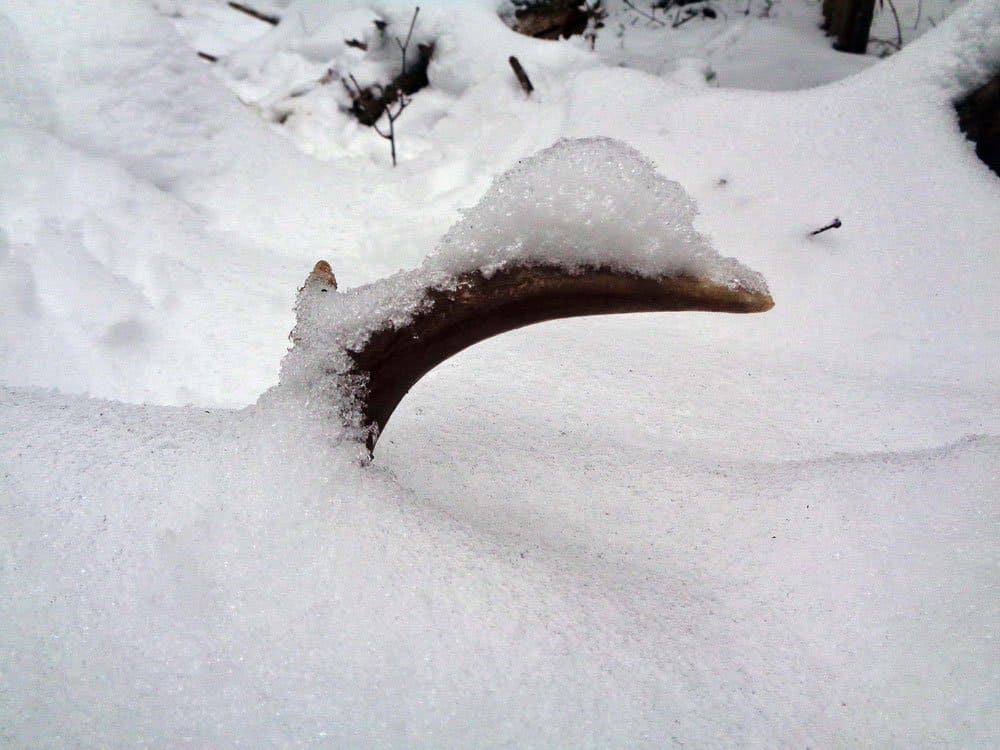 Loaded with an intense case of giddipation (the etymological roots of this word can be found here), I woke up way too early on the 30th and had to slap on a headlamp as well as my snowshoes (not necessarily in that order) to charge out into the -12 degree, 5:30 a.m. darkness. When I got to the carcass the camera showed that it had taken 35 photos in those 6 days. A lower number than I had hoped for, considering some photos were of my mug while putting up and taking down the camera!

The fisher macked on the deer for over two hours, even opening up a second access point by the deer’s chest to get at the tasty treats inside.

The photos didn’t reveal much. A fat (or phat) raccoon stopped and took a nibble, and a snowshoe hare hopped onto the snow-covered head of the buck (prey can be so dumb), but outside of that the deer appeared to have been ignored. Perhaps it had been too cold (frozen venison anyone?), or possibly the fisher was full. I read that fishers will sometimes sleep for days after a big meal so maybe this fisher was riding out the cold in some burrow in the ground with a full belly. Maybe. I waited to put the camera back up until it warmed up. When I returned there were 1320 pictures waiting on the camera.

Yes, it was truly a dream come true.

1100 of the photos were of the fisher as it gorged on the deer on the night of January 3. And what a feast it was after such a long, cold stretch! The fisher macked on the deer for over two hours, even opening up a second access point by the deer’s chest to get at the tasty treats inside. Another 200 shots were of the fisher’s return visit the next morning, and the final 20 were of my bald, icy-bearded grub. This was by far the most success I have had with the camera, I was extremely (almost excessively) pleased with the results. 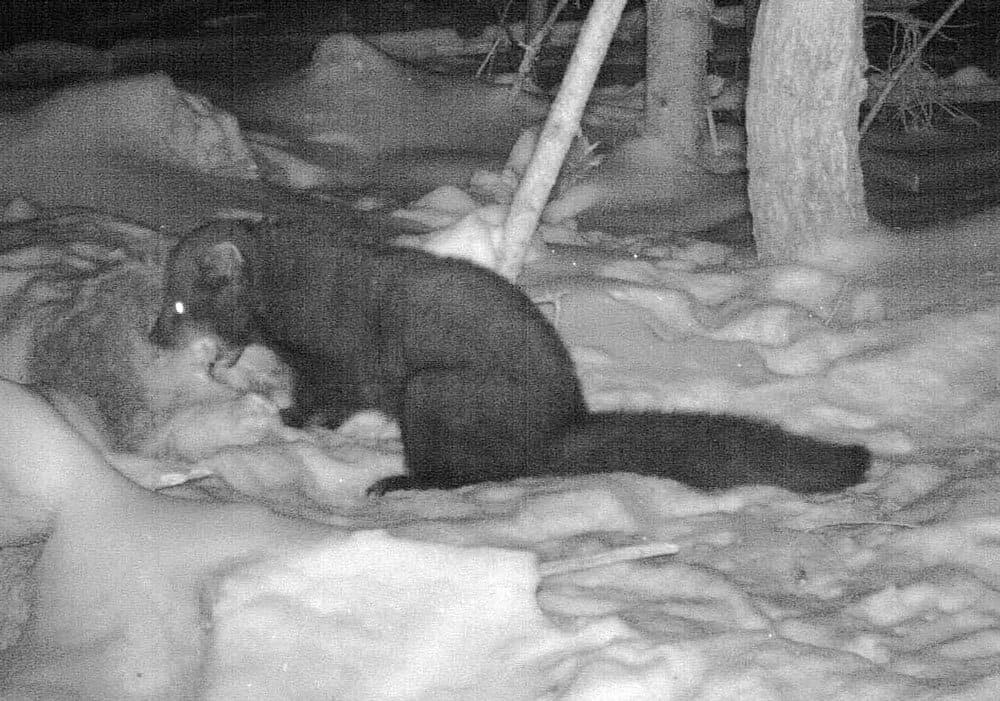 Dinnertime for the fisher!

Needless to say the camera is back up and we will continue to document the “feast that keeps on giving” until there is no more to document. If you are interested in seeing more of the fisher photos or photos of tracking on the marsh in general check out the Vinalhaven Sightings Blog or follow us (the royal “us”) at @Baldfulmar on the Instagram thing. Alright! See you out there!