Migration is pretty cool, and the moving-from-one-place-to-another survival behavior can be observed across the spectrum of the Animal Kingdom. From Monarch butterflies, the only insects that survive by making a 2,500-mile journey every year, to American Lobsters, which move seasonally to and from deeper waters, or the springtime return (and subsequent fall departure) of brilliantly patterned and melodic Warblers—migration is in evidence all over the Maine coast.

As for as migration is concerned, in cold, wet, late March it’s Amphibians that rule (fact)! On evenings when temperatures first reach a toasty 40 degrees (or higher), and the ground is wet with rain, it’s as if a starter pistol’s gone off—wood frogs and spotted salamanders are off to the races. With frogs hopping and salamanders cruising (I think that’s what they do), seemingly out of nowhere a somewhat chaotic scene ensues as they make their way through the woods, with some populations crossing roads, to vernal pools in hopes of breeding (that’s a race worth running!).

Vernal (or spring) pools are bodies of water that regularly go completely dry, so fish and other predators can’t establish populations within. The fewer the predators, the safer life is for eggs and young amphibians (I know, I know—thanks, Captain Obvious). On the flip side, a pool drying up also means there is a limited time for eggs to be laid and for juvenile frogs and salamanders to mature before the well runs dry (so to speak). Seems like a good strategy to get to the pools as quick and early as possible.

“On the last few nights of March the conditions for amphibian migration were achieved—it was wet, warm(ish), and rainy! I got in my truck, turned up the Iron Maiden (energetic music is key on drives like this) and hit the roads for my first amphibian cruise.” 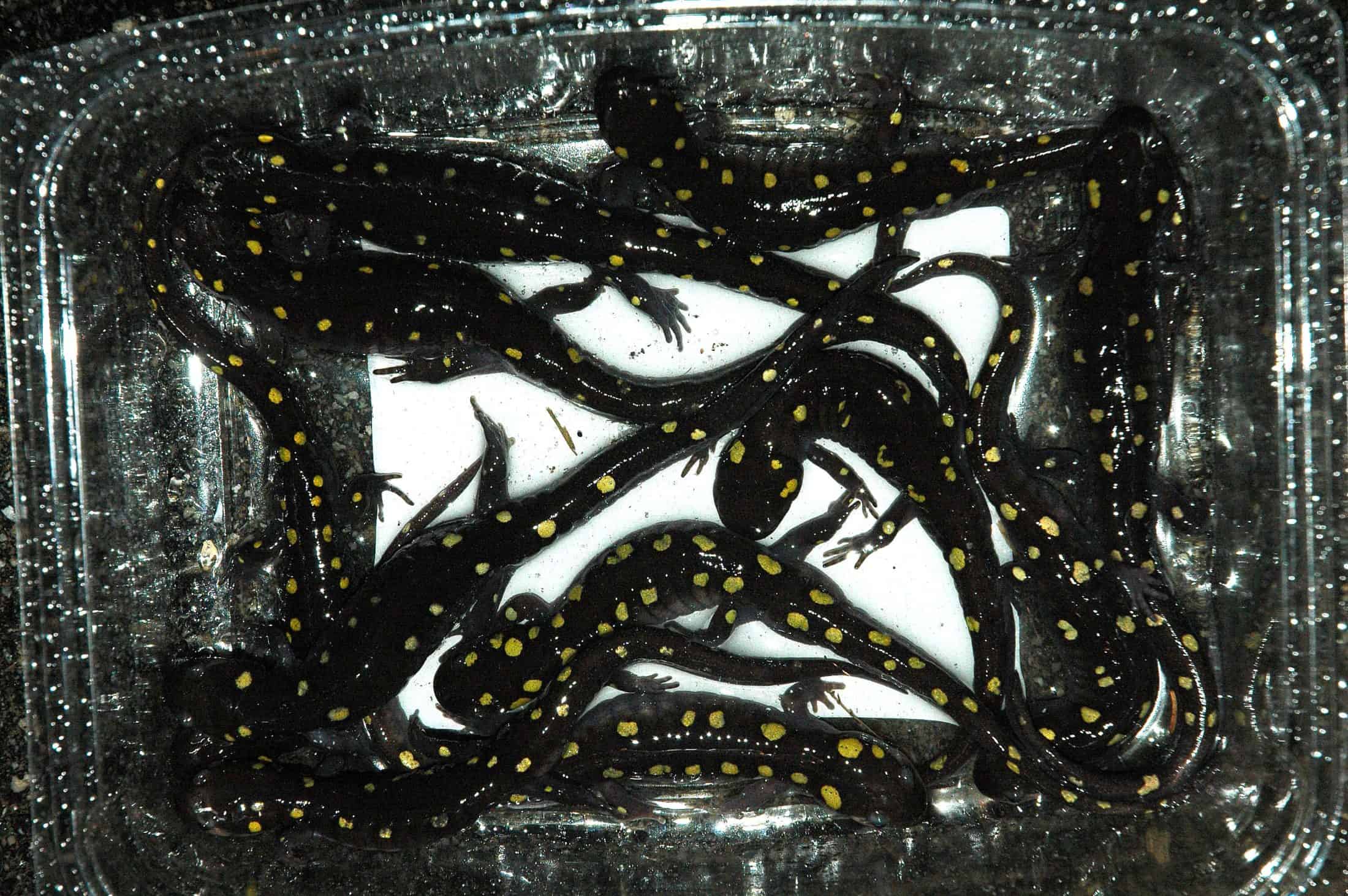 In theory, most if not all vernal pool amphibians in a given area will migrate the same night from their overwintering burrows to these temporary pools. This rarely happens, however, as differing amounts of snow cover, rain starting times, and distances individuals have to migrate can stretch a population’s migration length from a single night to a week or more. Some individuals go to impressive lengths to get to their vernal pools—spotted salamanders are known to travel up to 815 feet to get a pool, and wood frogs have been documented migrating over 1500 feet! That’s more than some people move in a day and these amphibians are tiny! So sometimes it takes a while.

Every year in late March we (the royal “we”) keep an eye on the weather in hopes of predicting and observing a part of this mass amphibian migration. This year was no different, and on the last few nights of March the conditions for amphibian migration were achieved—it was wet, warm(ish), and rainy! And even though there was more than a foot of snow blanketing my back yard and other places, I got in my truck, turned up the Iron Maiden (energetic music is key on drives like this) and hit the roads for my first amphibian cruise at about 10:30 p.m. (a little late for my son, Leif). I had given the rains half an hour to soak the road but apparently it wasn’t enough—I didn’t see any signs of migration. (Wood frogs and spotted salamanders have no problem crossing snow, they just have to get out of the ground first!)

Then I had an idea. One wood frog road crossing I knew of happened to face south. I made my way there. Sure enough, the ground on both sides of the road was completely void of snow, and, to my pleasure, a handful of wood frogs greeted my headlights with a hop or two as I pulled into the zone. My goal was to snag a few (for educational purposes) and then help the others finish their crossing before being crushed by other cars. Most of the time catching frogs is an art form that requires patience and stealth. But on a 40-degree night these coldblooded critters were barely moving and barely awake. I simply walked up to ‘em and picked ‘em up (with wet hands, of course). These are good times.

“Most of the time catching frogs is an art form that requires patience and stealth. But on a 40-degree night these coldblooded critters were barely moving and barely awake. I simply walked up to ‘em and picked ‘em up (with wet hands, of course).” 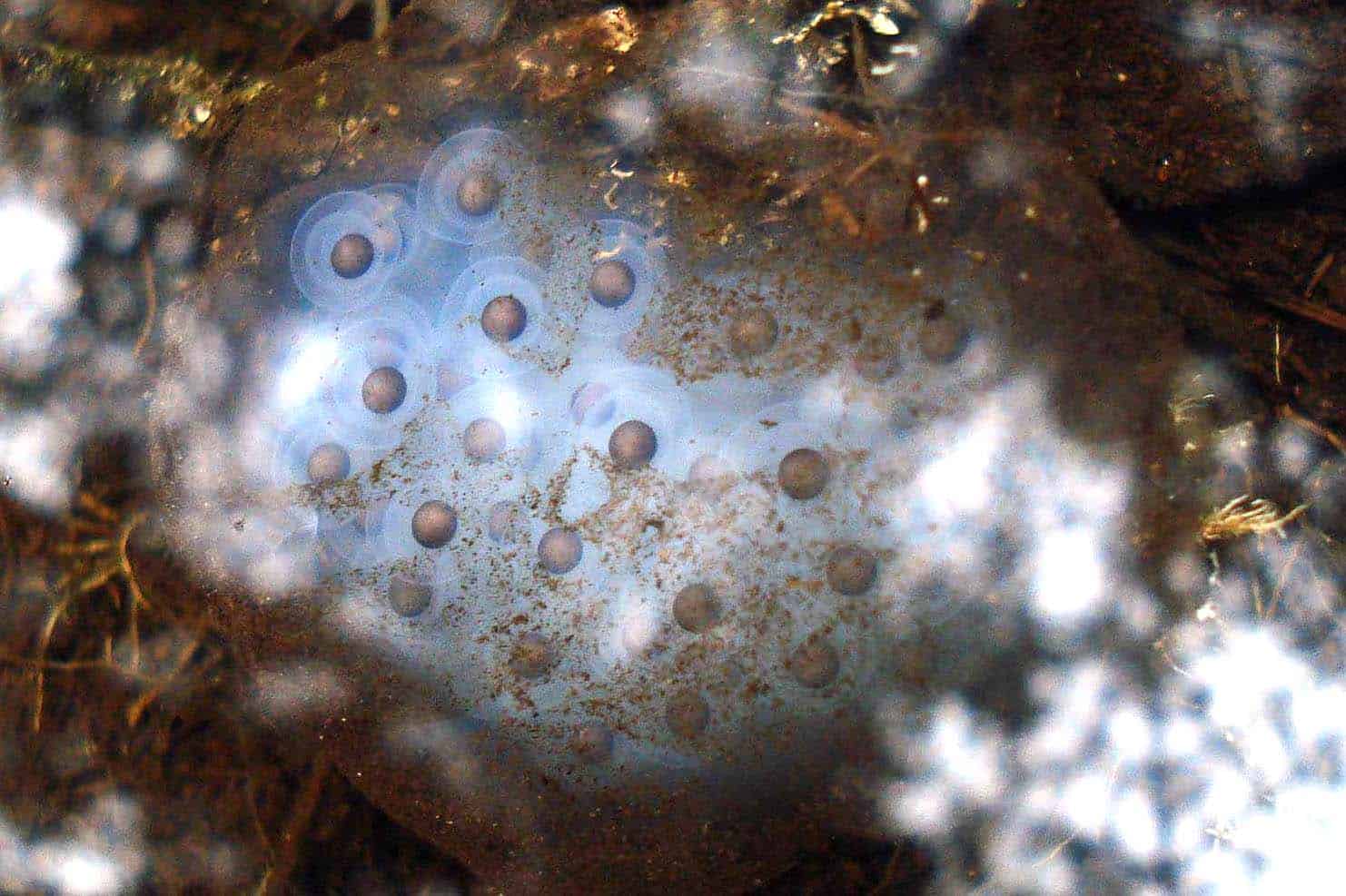 The rain continued through that night and most of the next day, melting a huge chunk of the remaining snow. The roads did go dry over the course of a sunny afternoon, but fortunately the rains came back late and I found myself doing the amphibian cruise (round two) at 11 p.m. the next night.

What a difference 24 hours can make! The snow was still patchy, but things had opened enough so that wood frogs and spotted salamanders were able to get their migrations going. Both species were observed at several road crossing locations, but the overall number of individuals seemed low. There would be another night (or two!) of movement before things were over.

So remember: it’s always a good idea to keep an eye out for amphibians on rainy evening drives in the spring. You never know who might hop in front of your wheels! And it’s a good time to start checking vernal pools. Egg laying and hatching can happen quickly—wood frog eggs often hatch before the end of April! A little later, in May, look out for spotted salamander eggs. Good luck everybody!