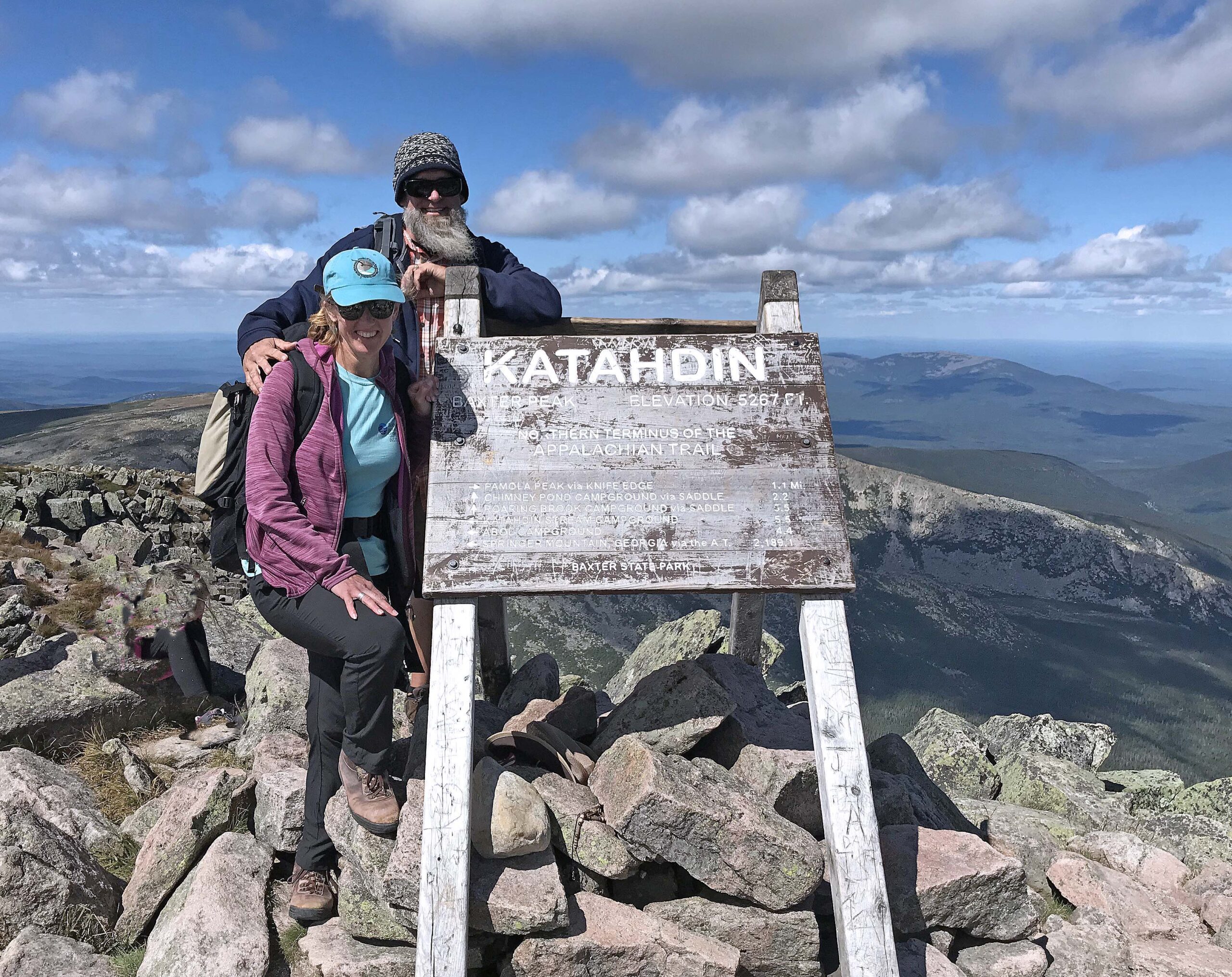 Sometimes we (the family “we”) get away from the coast, to a place called “inland.” There is always a mountain or a stream involved—and my wife is pretty much always in charge of the plan. (Did I marry well or what? All that and a lovely and pleasant personality, too!).  We each have our own unique niches, as most people in most relationships do, I suppose. I’m excellent in the role of sherpa, which, I was told on this particular outing, is another word for dad. I am fine with this niche.

This summer’s interior Maine venture took us to Baxter State Park, and we had our sights on hiking to the top of Mount Katahdin. Katahdin is the highest peak in Maine or New England (and, as far as I was concerned on this particular day, the universe). It’s 5,200 feet high (and change), and there’s a sign on the top of the mountain to prove it.

For those of you not familiar with the trail system around Katahdin, there are several paths that lead to the summit. They have catchy names like Knife’s Edge, Roaring Brook, and Helen Taylor. Our campsite for two nights in the park was next to the trailhead for a path called Abol. Go ahead and check a map; we were in lean-to number 12, which is quite literally at the trailhead.

It had rained a few days prior, and that gave us hope for finding mushroom treasures. We spotted some before we left good ole’ number 12. Pigskin poison puffballs (Scleroderma citrinum) were growing off buried decaying wood around the campsite, which got the mushroom conversation going and the day just kinda rolled from there.

Questions kept coming up for us… “What’s the purpose of a puffball?” “What do mean by mycorrhizal?” “Will it kill me?” These questions were good reminders of why I like hiking with eleven year olds. They’re awesome explorers.

As common names go, pigksin poison puffball (PPP) is pretty loaded, as it’s (a) not truly a puffball and (b) when it comes down to it, it isn’t all that poisonous. (Texturally they do kinda look like a football, though.) PPP is actually a false puffball (Order Sclerodermatales), as its outer layer will break and crack to release spores.

True puffballs (Order Lycoperdales) have a single opening in the skin from where spores are distributed as puffs erupting from a “ball that puffs.” You will not die (probably) if you mistake PPP for an edible puffball and consume it the way you would an actual puffball (orally). For the PPP and for the vast majority of poisonous mushrooms, digestive meltdown won’t kill you, but…

There are a number of mushroom edibility categories: choice, good, crappy, and non. Similarly, mushroom poisoning has various (and unofficial, off the top of my head) levels: digestive meltdown, death, trippy, and non. And just as mushroom gatherers show a different level of respect for choice edible mushrooms, I find there can also be a spectrum of respect based on the level of poisonous mushrooms. PPP cause digestive instability, which seems like a minor annoyance compared to death (but maybe that’s just me). Still love ‘em and still don’t want to eat them!

We headed out somewhat early and were hardly up the trail before we came across our first Amanita of the day, and it was a doozy: destroying angel (Amanita virosa). Nothing like finding one of the two deadliest mushrooms in north America right off the bat. Full on “death” category! Destroying angels are a classic combination of a couple of our favorite mushroom/fungus characteristics: deadly poisonous to humans, yet essential to the health of a forest, thanks to their mycorrhizally symbiotic relationship with trees. Plus: they have probably the coolest common name ever. Anyway, the hike was starting off great.

We found many more mushrooms along the trail, including decomposers such as Polypores, which were especially abundant. We found way more mushrooms than we’d been seeing on the coast (and with that, the smiles grew bigger).

Now is about as good a time as any to mention that, from my understanding, the 4.5-mile long Abol Trail is the shortest trail to the peak. It’s also a trail that comes with several warnings (on paper, online, and straight out of a ranger’s mouth) about the degree of difficulty. “Rock scramble” is a phrase currently mentioned. Sure enough, we experienced a stretch of trail that works its way through a boulder field which happens to be uneven (nearly vertical). We had time, and the views were so fantastic, so we took breaks often enough. A pair of peregrine falcons flew below us during lunch, making the turkey and cheese sandwiches taste that much better. And with that, we powered our way through the scramble to the table lands atop the mountain.

The table lands is the somewhat level plateau hikers cross from the scramble to the final ascent to the peak. Above tree line, it’s other worldly in appearance, with a temperature drop that inspires us to dig longer sleeves and wool hats from the depths of our back packs. Known as a breeding ground for American pipits, we didn’t see any on this visit. Instead, it was all about the dark-eyed juncos who searched the scattered patches of ground cover for sustenance in this largely desolate world. Seeing some of the habitats where juncos spend their summer makes me appreciate them even more. They’re hardcore.

Ravens circled below the peak as we “bagged” it in classic form. Time for a snack, photos, and some laughs with the collection of nice people brought together by the official sign. And then we had to head down to get back before dark. Overall, it was a ten-hour-plus trek from start to finish.

Towards the end, Oliver said, “I thought we would have taken more breaks.” At first I thought he was saying he’d been tired and could have used more breaks, but then I realized he was wishing we had more time to explore. Getting to the top required a disciplined pace, one with fewer off-trail adventures than we are used to I guess. But we were looking the whole time, and saw lots of cool stuff.

A barred owl calling by the campsite wrapped the day up nicely, as folks played cards in the tent. Like bird watching or mushroom looking at 55 mph on the highway, there is something to be said about nature appreciation on the fly. Can’t hike like that all the time, but that evening there was absolutely no bummin’ at the bottom of the Abol Trail.  Just success and satisfaction.