About a month ago Maine Governor Janet Mills unveiled the stay at home order for the state. The order came with a sweet “exercise” loophole that allowed for outside exploration (how else does one exercise?). And with that included, I felt like I was ready to do my part for the world by not wandering far. Still wandering, just sticking to the ‘hood for the greater good.

When you grow up in New Jersey, you feel especially lucky to live on the St. George Peninsula—and to be in Maine in general—where you are never far from observable and enjoyable wildlife/nature. I hope you have been able to get outside in these interesting times. And it has certainly been an interesting month for learning…

I’d like to share some recent local lessons. Granted, some of these lessons I first learned years ago, and have learned many times since.

Here’s an example: if you want to see crepuscular animals like beavers, muskrat, and owls, you’ve got to go looking at twilight. The fact that you can rely on animals to be more active at dusk and dawn is a comforting. I feel relaxed just typing it. And so evening strolls have been reliably full of sightings.

Days are good for animal spotting too, of course. Leif and I snagged a new basketball hoop when things started getting real with social distancing stuff. There is a wonderful old Estonian saying, “Shooting hoops is a great time to look for raptors and other large birds” (or something like that) and the month of April proved that to be true.

When you live in Midcoast Maine, sticking close to home isn’t so bad.

Early in the month of April, games of H-O-R-S-E and one-on-one were routinely interrupted with bald eagle and turkey vulture fly overs. In mid-April, Cooper’s hawks on the hunt cruised through as osprey circled overhead.

I have been told that April 15th is for taxes and osprey returning to the peninsula. More recently, local pairs of common raven have been vocal and showy. I think we all get that way around egg hatchin’ time. And now Broad-winged hawks have made their triumphant return, adding that high-pitched whistle of theirs to the daily mix. It’s a great time look up, but it takes away from my already porous defense!

Lessons in nature can get personal sometimes, and are not always positive. For example: Canada geese are really loud and not my favorite animal. While they are loud year-round, their bravado has a particular edge in April. Eventually they lose that edge and chill, and things get a little better. They remain geese though, and that simply cannot be overlooked.

A tougher lesson this month had to do with local hairy woodpeckers. Let me start by saying woodpeckers are intrinsically cool and the concept of a bird slamming its head against a tree to access tasty critters hidden inside is wonderfully crazy.

For years I have appreciated the random displays and calls that go along with hairy woodpecker courtship—the chases, the tail-spreads, and the “pik” or “pek” calls. But this April the woodpeckers bugged me.

Apparently, I live at the edge of two hairy woodpecker territories, and for a two-week period there was a never-ending series of battles and gamesmanship as jockeying for turf escalated. It was charming at first, and, as I’m typing this, it occurs to me that this actually sounds kind of nice, but for some reason it got to me. As a bird watcher from the womb – I like to say I was born with binoculars – it was odd, but it got to the point where simply hearing the sound of hairy woodpeckers inspired emotions of disdain. It made me question if I ever liked woodpeckers at all!

Ultimately, I do like woodpeckers—just not hairy woodpeckers—for about two weeks a year. Amy told me I was funny, but it was a relief when the woodpeckers suddenly became chill again, as if they were focused on eggs rather than arguing with their neighbors. I quickly went back to liking them, and look forward to watching their babies grow!

And speaking of the next generation, being home bound in April means making daily (or so) trips to a few of the local vernal pools, and let’s just say that wood frogs and spotted salamanders never bug me! Not yet at least. 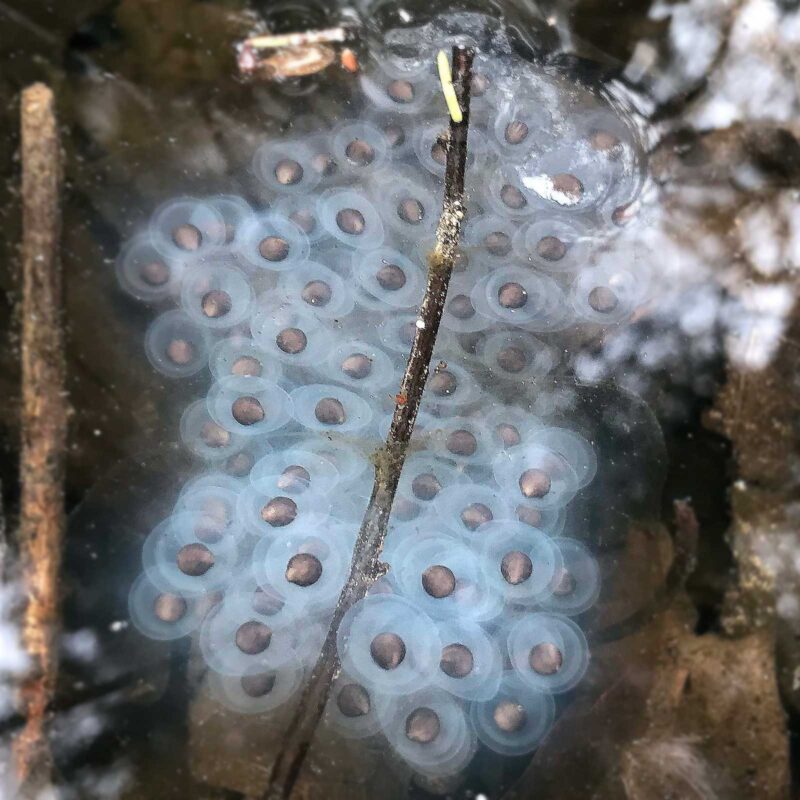 April 2 turned out to be a big night for amphibian migration (seems a little late to me). A few days later wood frog egg masses could be found in pools throughout Midcoast Maine, and the first few spotted salamander masses also turned up. It was a full nine days later (really late!) when the rest of this year’s spotted salamander masses were laid.

A reliable event every April, I always love seeing amphibian egg masses regardless of when they show up. Now that’s comforting.

It’s been three weeks since the wood frogs laid their clear eggs, and time is moving along as would be expected. Some eggs have been attacked by fungus, some eaten by caddisflies, but the embryos that have survived to this point are starting to unfurl and look more critter-like. It’s only a matter of time before they hatch, filling the pools with the tiniest of tadpoles.

The spotted salamander embryos take longer, but aren’t too far behind, and soon there will be aquatic salamander larvae swimming around with external gills, joining the tadpoles in the race to adulthood before the pool dries up. They grow up fast because they have to.

And like the woodpeckers, the brown creepers and golden-crowned kinglets who unknowingly serenaded me around the pools have stopped singing and changed behavior to focus on nesting, eggs, and the next generation.

That’s spring for you. More life, new generations. When you live in Midcoast Maine there is plenty of that life to see, and so much of it can be found in your own yard—or close to it.