It’s human nature that inspires many to look for and celebrate the first signs of spring. After a winter of discontent (or just finding yourself tired of being cold), these harbingers are a welcome sight, bringing messages of change, hope, and rebirth.

For some it might be the first pussy willow flowers blooming. For others it may be hearing the first spring peeper peep or seeing the magnificent woodcock aerial display. Back in the day the classic sign of spring was the first glimpse of a robin, but nowadays you can see those just about any time of the year, which is not a bad thing. Robins are alright.

Not for your entertainment 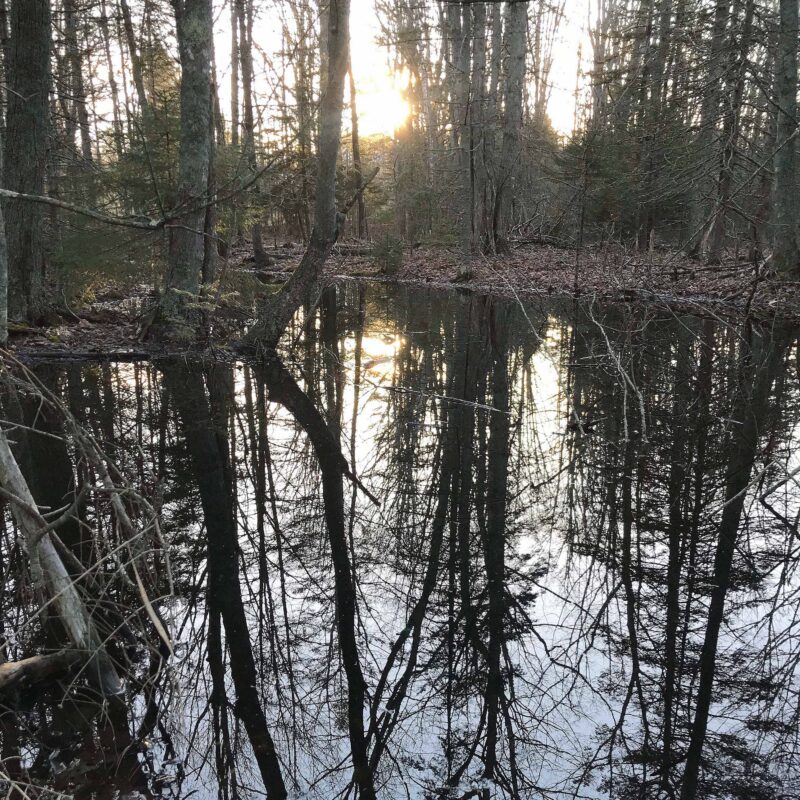 A vernal pool in the gloaming

It’s wonderful that we can be present and experience these moments, and walk away with a new bounce in our step. Let’s not forget, though, that these natural harbingers—the blooms, the calls, the migration—aren’t done for our entertainment.

To be blunt, it’s all about breeding. Be it a flower, frog, bird, or bug, they all are looking to pass their genes on to the next generation. Simple as that. When we celebrate signs of spring, we celebrate signs of courtship and pollination. Even the vernal pool amphibians take on the classic sex-before-food approach. Hats off to priorities!

Spermatophores can tell us so much 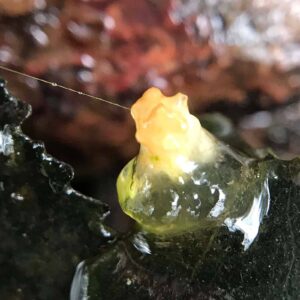 Spermatophores, up close and personal

Some people call this time of year the first three weeks of April, and then there are those charming humans who refer to it as mid-to-late early spring. There are noticeable changes and arrivals during this mid-to-late early springtime, but at a pace that’s a slower prelude to the explosion of life that is May and June. The song and tail flick of Eastern Phoebes is new in the yard at this point, and it’s hard to miss the aggressive honks that signals the return of Canada Geese.

And still, you never hear anyone say, “Must be in mid-to-late early spring!” when they find a female woodcock on a nest. This slice of time is in dire need of a mascot and I, for one, have settled on my own personal nature nominee. I am talking about the placement of spotted salamander spermatophores in vernal pools! I’ll just call them spermatophores to save time, space, and energy.

With the whole social-distancing-and-decreasing-range-of-exploration-in-an-effort-to-be-a-good-citizen thing, I have found myself visiting my neighborhood vernal pools almost daily, if not several times a week. These regular visits have clued me into what’s been going on in the pools at night, and the biggest clue of all has been these spermatophores.

To get a better feel for what these are about, we turn to Thomas Tyning’s work, “A Guide to Amphibians and Reptiles.” Here’s how he describes salamander courtship ritual: “At some point the male will walk away and slowly wiggle the tip of his tail. The female may follow, and, if so, he will deposit one or more spermatophores onto a leaf or twig. If fully stimulated, the female will walk forward and cover one with her cloaca and, in so doing, transfer the sperm to her oviducts.”

I have never gone at night to watch such events. I’d like to say it’s out of respect, but I wouldn’t really know which night to make the visit anyway. Locating spermatophores left over from the previous night’s activities, however, can be useful if trying to predict when egg masses will show up in the pools. “Anticipation levels soar with the sight of Spermatophores” (ancient Estonian proverb).

As you may remember from the last Nature Bummin’ post, huge numbers of Spotted Salamanders migrated in St. George on the night of Thursday, April 2. Three days later, I visited four local vernal pools and found about a dozen small, mostly white gel packets at the bottom of three of them. The spotted salamander spermatophores were sprinkled across the leaf litter that covered the bottom of the pool, and their lightness in color stood out compared to the dark decay below. The next day I saw the first few spotted salamander egg masses in those pools. Over the next few nights more were laid in each pool, bringing egg mass totals to three, four, and five respectively. 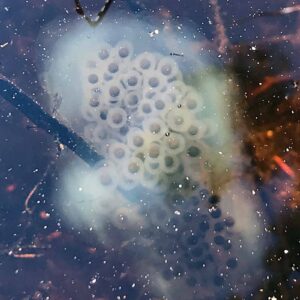 It was exciting to connect the spermatophore and egg mass dots. I figured there should be 80+ masses in two of the pools. It’s wasn’t so much a question of “if” but rather “when” the rest of eggs would turn up.

In the next few nights the pools will fill with salamander egg masses, a full two weeks after the big migration night.  We know this destiny will be fulfilled, and thus we are filled with giddypation. And we know it thanks to spermatophore tracking, which gets my vote for being a true sign of mid-to-late early spring. Just try and argue with that!