Unless you’re a rodent (and you know who you are) you’re most likely a fan of raptors, a.k.a. birds of prey.

I sure hope you have had the pleasure of watching an Osprey splash and snag a fish out of the water, or become absorbed in the majestic beauty of a Red-tail Hawk riding a thermal of hot air to greater and greater heights.

Maybe it was the sight of a Bald Eagle dive bombing a school of fish, or when the sharp-shinned hawk picked off that annoying, bully Blue Jay at your bird feeders, but somewhere along the line a raptor has probably put a smile on your face.

“Somewhere along the line a raptor has probably put a smile on your face.”

In comes the Broad-winged Hawk

The raptor I cross paths with more than any other in St. George is the Broad-winged Hawk (Buteo platypterus). Broad-wingeds are crow-sized “buteos” of the woods, a smaller version of a Red-tailed Hawk. Sharp-shinned or Copper’s Hawks, on the other hand, are “accipiters,” with their shorter wings, and long tails.

From mid-April through September it is rare to take a bike ride or trail walk on the peninsula without spotting a Broad-winged hunting from a perch or darting through the maze of branches in a forest canopy. These are special times.

Measuring in at 16 inches in length (tip of the bill to tip of the tail) and a with three-foot wing-span, Broad-wingeds are relatively compact for a raptor. When perched, the hawk’s reddish head, and the reddish scaling on its body, make for an overall darkish appearance.

In flight, with wings open, Broad-wingeds show mostly white or light coloration surrounded by a distinctive dark brown border. A Broad-winged’s tail has a series of white and black bands that can be seen at a distance, and, along with the distinctive wing pattern, make identification of this hawk somewhat easy even from far away. 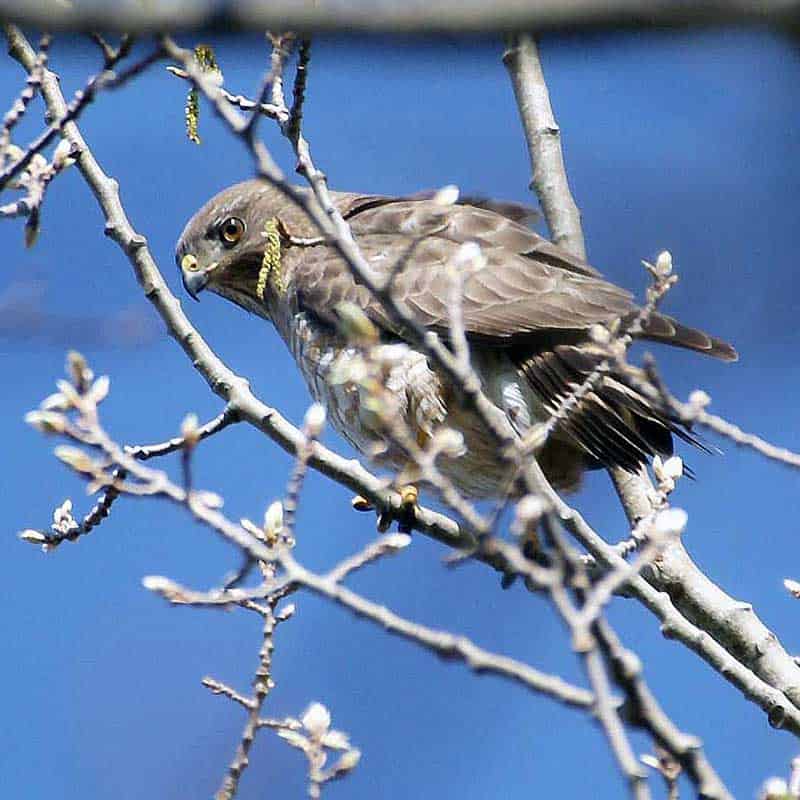 A mated pair will make a loose nest of sticks, twigs, and leaves in the crotch of a deciduous tree between 30 and 50 feet high. Construction takes about three weeks with the female making the finishing touches as she lines the nest with softish inner bark strips, lichen, evergreen sprigs and green leaves. Sounds cozy.

She then lays two or three eggs which are then incubated for 30 days or so. It’s another five weeks before the young fledge and leave the nest.

In the fall, Broad-wingeds embark on a long journey that can take them to Central America (Guatemala south) and even into South America to eastern Peru, Bolivia, and southern Brazil. Broad-wingeds often migrate in huge groups, and in the right conditions anywhere from tens to hundreds of birds can be seen forming kettles as they catch a “free” ride on thermals (an upward current of warm air, used by gliders, balloons, and birds to gain height).

These huge Broad-winged kettles are partly what have made hawk watching hot spots like Hawk Mountain in Pennsylvania so legendary.

In Maine, when the wind freshens and blows from the north, head up to high points along the coast, like Bradbury Mountain in Freeport, Mount Battie in Camden, or Cadillac Mountain on Mount Desert Island. The outer islands—Maine Coast Heritage Trust’s Whaleboat Island Preserve in particular—are also great places to be on the lookout.