Vacations are great, but coming home after vacation can be just as sweet.

Things get back to normal, but not exactly how things were when you left, because your vacation changed you (hopefully for the better, but whatever) and you’re seeing your “old” life with “new” eyes.

For some reason, birds are often what first grabs my attention.

After returning from our family’s recent adventure, I found myself tapping into the local chickadee scene to catch up on what was going down in the neighborhood (songbird speaking, of course).

From their chatter it was clear the chickadee behavior had changed in our time away. First off, the chickadees were part of a sizable flock, as their chip and “chick-a-dee-dee-dee” calls were mixing in with calls from other avian species. As day length decreases, Black-capped Chickadees dissolve their territories and merge with neighboring chickadee groups to form larger flocks.

Safety in numbers is key when courting and breeding seasons are over. Chickadee groups also allow other songbirds (and woodpeckers, etc.) to take advantage of the kind of survival strategy that only a mixed-species flock can provide.

The first group of chickadees I saw had Blue-headed and Red-eyed Vireos, a young Magnolia Warbler, a Northern Parula, and a small handful of Black-throated Green Warblers mixed in. I felt a bit more at home, which made sense since I was at home.

I then got all jazzed up to “reclaim” the meadow trail system in our yard. After a few weeks of unchecked mid-summer growth, the trails had become an aster jungle. Before rehabilitating the plants on the pathways, I strolled through and checked out what this micro-jungle scene was made of (fauna wise, of course).

Finding dragonflies perching and hunting from the flowers was unsurprising—as was seeing bees, flies, and butterflies slurping up nectar as they tried to avoid those dragonflies.

The presence of Clearwing Moths (Genus Hermanis), however, got me most excited. The two species of Hermanis are collectively referred to as Hummingbird Moths, but in reality they come in two separate flavors: Snowberry Clearwing (H. diffins) have mostly yellow abdomens and the Hummingbird Clearwing (H. thysbe) abdomens are orangey-red. 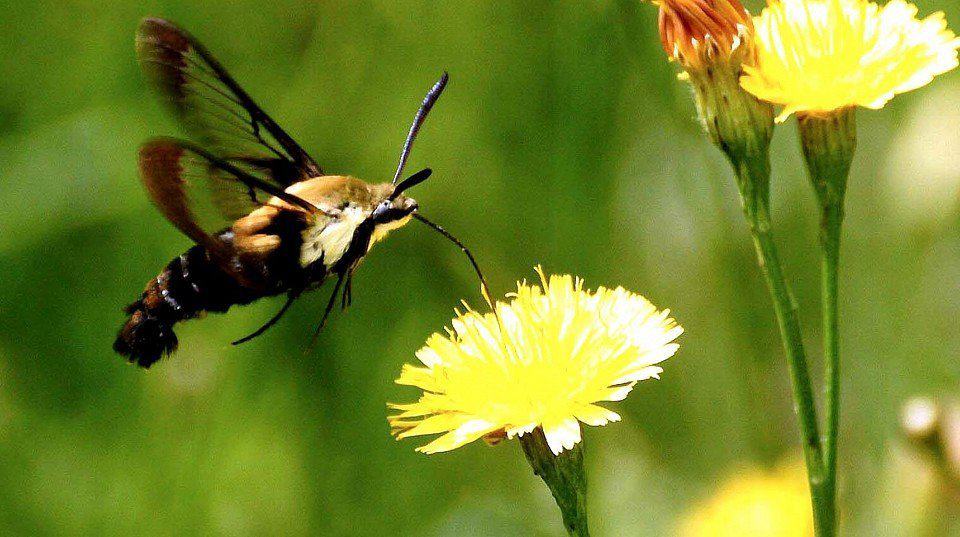 Another Clearwing moth! (Kind of shaped like a lobster!)

The combination of coloration and abdomen shape inspires my friend Amanda Devine to refer to the Clearwings as “Skylobsters.” Fitting description. Both species inhabited the aster jungle that day and I couldn’t have been happier.

Where most moths flit around slowly at night and gather at lights (boring!), these Clearwing Moths were flying faster than fast—zipping from flower to flower and then eventually zipping by my head. These are by far the coolest moths to watch (moth watching!!!).

Crossing paths with both species was a wonderful welcome back to the ‘hood. I still slayed the asters in my yard trails, but there remain plenty of “off trail” flowers for the Clearwings to tap into! If I wasn’t totally feeling at home yet, I was well on my way.

Nothing, though, can take me home like a good ole’ creek walk can. 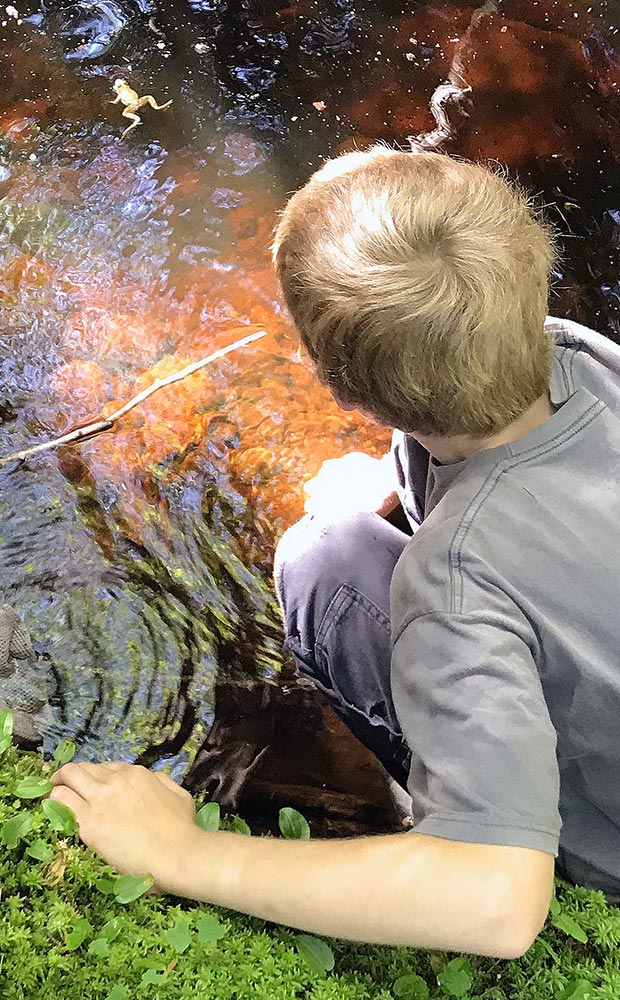 Kirk’s son Leif explore the creek near their house. They’re on the lookout for frogs and salamanders.

For our creek walk adventure, my son Leif and I grabbed some nets, snagged a couple of buddies—Oliver and Clifford—and headed to Jones Creek.

Water was flowing strongly after a recent rain, and frogs jumped in mad dashes as they spied the four of us trucking not-so-stealthily down the creek. After securing one Green Frog in our bucket (several more took advantage of the endless number of hiding places in the creek) we switched gears to salamander “hunting.”

We’ve found adult Northern Dusky Salamanders close to the creek on past visits, but on this day we were fortunate enough to find larval salamanders still in the creek—this year’s model of Duskies, complete with external gills.

We wrapped up our outing with a Red-backed Salamander sighting and numerous Amanita mushroom sightings. Needless to say, we were pumped, and I was feeling more and more grounded and present. Nothing hits the spot like a good creek walk, with four sets of eyes looking. (The more the merrier.)

A version of this story originally appeared in the St. George Dragon.