On a drizzly morning in June, a group of Maine Coast Heritage Trust stewards, marsh scientists, and restoration specialists met at the Old Pond Preserve trailhead in Hancock, where they spent the day in knee-high boots exploring the salt marsh and learning all they could about how it’s functioning—or, rather, not functioning as well as it could.

Like many Maine salt marshes, this one was formerly farmed for salt hay (Spartina patens), and human manipulation of the marsh in the form of embankments (earthen berms) and ditches has impacted the movement of water within the system. MCHT Regional Steward Tatia Bauer explains, “Agricultural legacies left on the marsh cause unwanted pooling, which leads to loss of marsh vegetation.” Without healthy plants, the marsh can no longer capture sediment as it comes in with the tide, causing the marsh to sink over time. This is especially problematic as sea level rises because marshes can’t keep up.

MCHT launched its Marshes for Tomorrow Initiative to protect Maine’s top-ranked marshes for resilience in a changing climate. Salt marshes represent one of our most important coastal habitat types—numerous kinds of wildlife spend some part of their life cycle in marshes, and they buffer storm surge and absorb carbon dioxide from the air. MCHT is protecting land surrounding marshes so that as sea level rises, they can migrate inland and reestablish. But if the marshes aren’t functioning properly, land protection only gets us so far. 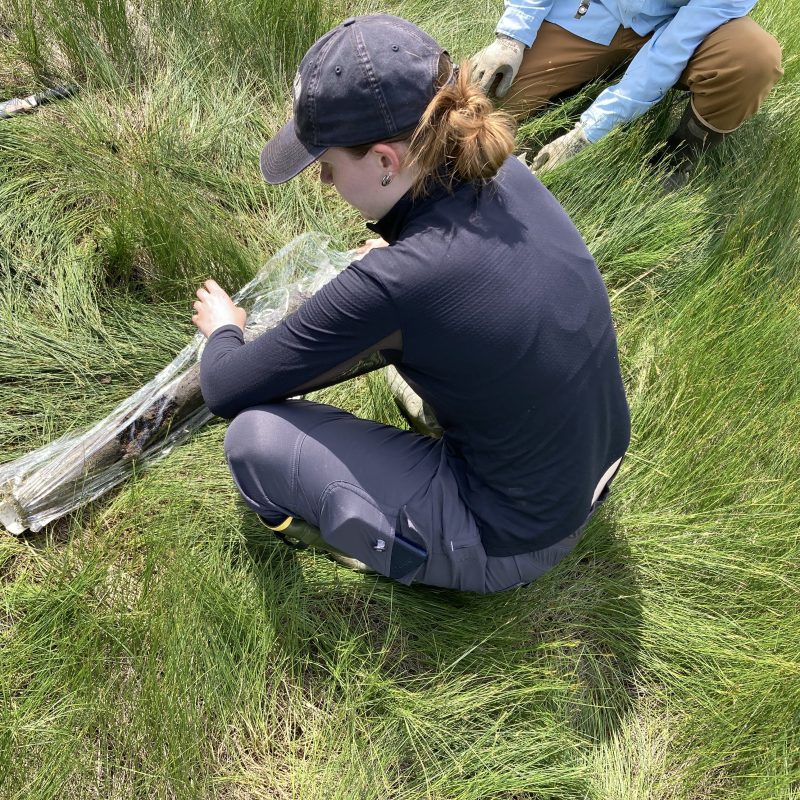 Based on information gleaned from this visit to Old Pond Preserve, marsh restoration practitioner Geoff Wilson from Northeast Wetland Restoration is developing a plan to connect existing channels to allow the pools to drain and encourage revegetation. The project has received funding from the Maine Natural Resource Conservation Program and will “help facilitate processes where the marsh is building itself back up, ultimately increasing the elevation of the marsh and making it better suited to follow sea level rise,” says Tatia.

This is one of the first projects of this kind to occur in Maine, and MCHT is excited to share what we learn with other land trusts throughout the state in a series of workshops in 2023. Tatia, who began working at MCHT earlier in 2022, says, “It’s exciting to play a role in the beginning stages of this work for MCHT and for the state. I feel like I got here at just the right time.”

Learn more about the Marshes for Tomorrow Initiative.