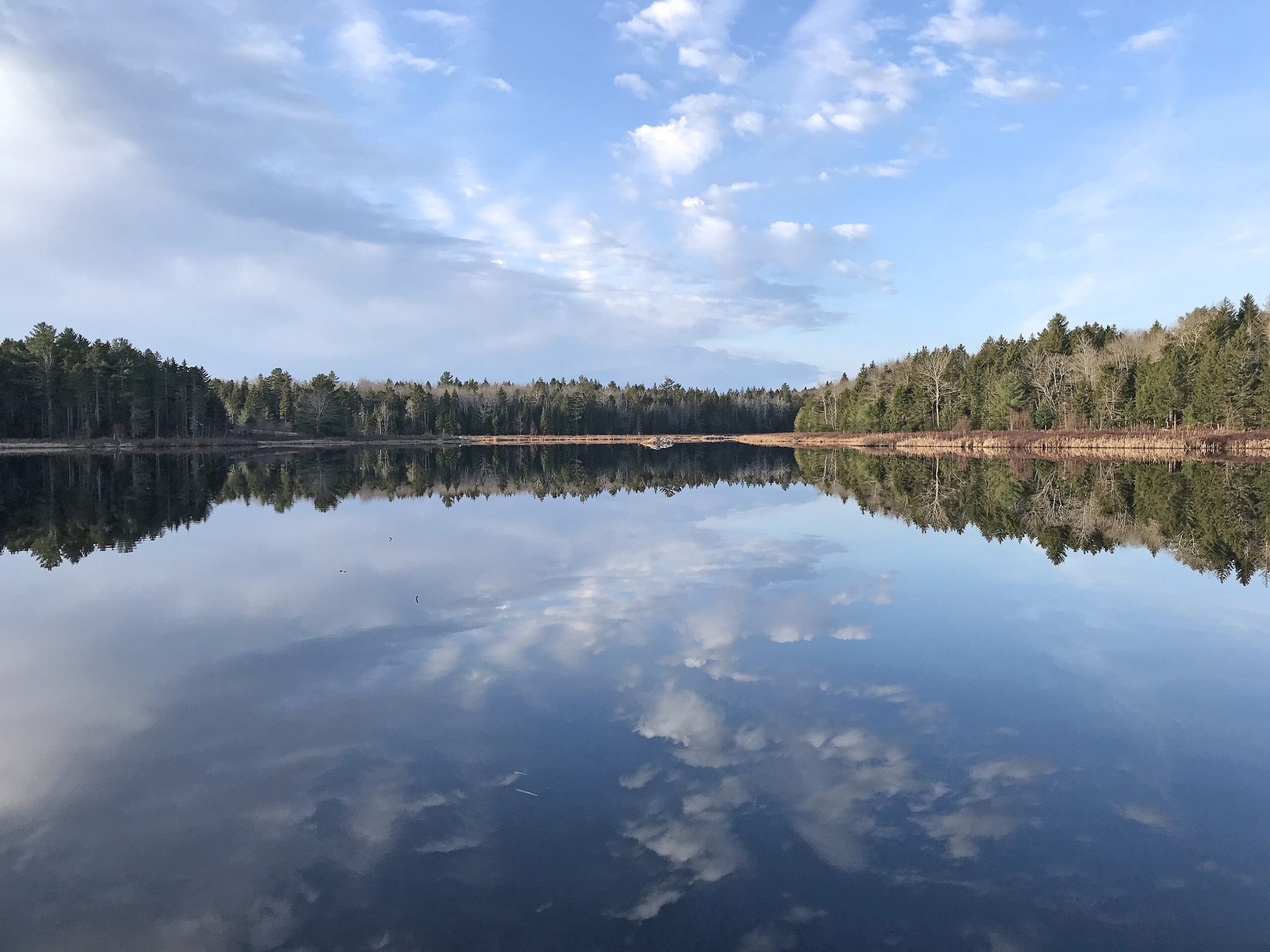 On many levels, November 2020 came roaring in “like a hurricane” (as Neil Young would say). In fact, 2020 has been such a far-flung, rut-less mix of events, it wouldn’t surprise me if the thought, “kinda miss last year’s rut…” hasn’t crossed many people’s mind at least once. As November came to a close, and we all got one step closer to moving on from 2020, I unexpectedly came across a most unique (for me) calmness. And in the backyard, no less!

It’s no secret that I am fond of the local marsh here in St. George, and that I often find myself scoping out the habitat’s rich variety of wildlife. Crepuscular visits, especially dawn, increase chances of spotting a muskrat, beaver, or (dare I say) river otter wrapping up their nocturnal activities.

Late November also happens to be the tail end of deer-hunting-with-the-use-of-firearms season, which means orange is the fashion statement for the forest, a look that says, “I would like to survive this outing.” While hunting may limit any extended explorations, the patch of marsh I live along is close enough to homes to be (pretty) safe from gunfire as long as I stick to a small area (though they can certainly be heard sounding and resounding in the distance). 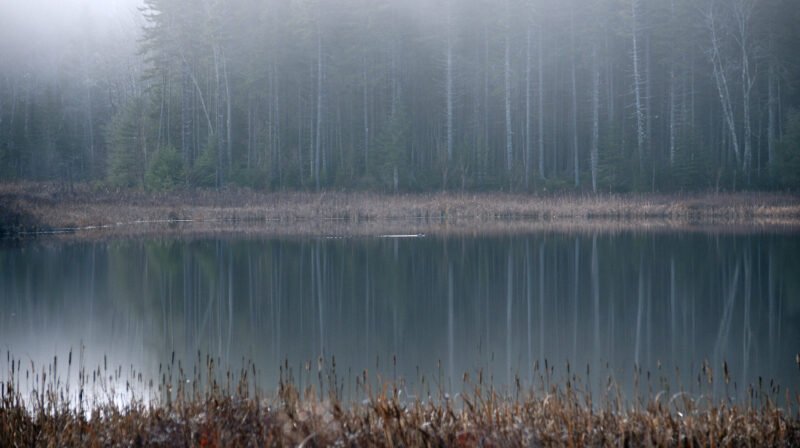 Mallard in the mist

On one recent exploration, the seemingly ever-present winds finally died down. Like, stopped. This absence of wind made for wonderful reflections on the water. Overhead, clouds hovered motionless, completing the picture of calmness.

With no recent rains, the detectable water flow over the beaver dam—just 100 feet away—was nothing, audibly speaking. No vehicles were heard from 131, and any active lobster boats had likely headed out long before I got there.

There were no sounds of beaver tail slaps, birds, or even a rifle blast in the distance. It was truly the sound of silence. I can’t say that I have ever recognized such a stillness, which stretched on for minutes, close to twenty of them, filled to the brim with nothingness. (What did the buddha say to the hot dog vendor? Make me one with everything.) It was a fragile calmness, as all complete calmnesses must be. The first rays of the day finally hit the trees lining the marsh’s western shore, barely warming the air into movement, and the breeze was on. Not fast enough to feel, not loud enough to hear—just enough to see reflections break up; they were done for the day.

“With this in mind I realized (epiphany!) that what I typically look for in nature are breaks in the calmness.”

At the same time, I recognize that whatever stillness I found was purely based on perspective. Activity under the water and in the woods surely broke the “calm,” but it was out of my range of awareness. Predators were stalking their pretty, things were decomposing, scat was being deposited. Calmness in nature? I doubt it.

With this in mind I realized (epiphany!) that what I typically look for in nature are breaks in the calmness. It could be a great blue heron flying up the marsh or the rattle and hum of a belted kingfisher a quarter mile away. It could be the loud splash as gangs of migrating ducks (I think they are called gangs) land in the wet, marshy waters. In a way, the stillness I described above was kind of the opposite of what I hope to experience outside. I was wearing orange and it was early; 10 minutes of calm would have been plenty. 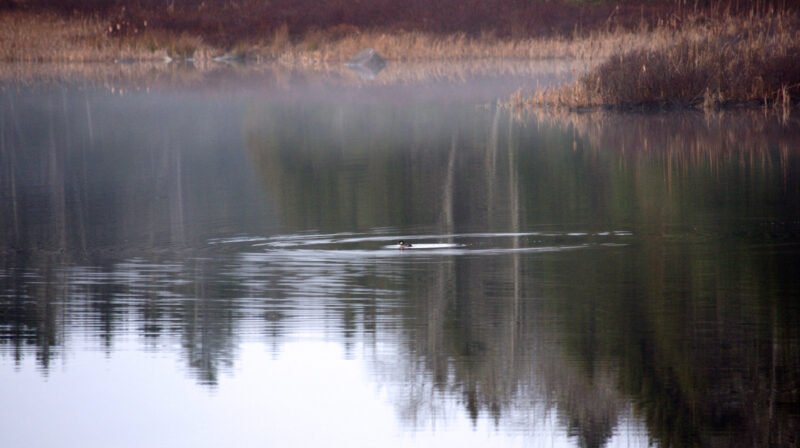 Bufflehead making ripples on the otherwise still surface of the water

And then we had rains, and the following mornings were different. The dam began to roar. The local pileated woodpeckers were vocal—and they have not stopped! White-winged crossbills and wood ducks zipped this way and that, cutting up the calmness—maybe inspired by a newly arrived predator.

The usefulness of water reflections (and the calmness they require) became apparent when a female bufflehead duck spent an early morning in the marsh. Was it the ripples, or the distorted reflection that drew attention? Either way it was impossible not to see her and follow her progress around the marsh as she dove and dove and dove, catching what she could below the surface. That felt like a good use of a reflection. Reflections are made for waterfowl! Epiphany #2?

In the following days, the wind was similarly non-existent. Three times, long reflections helped me locate small gangs of wood ducks in flight. Wood ducks never seem to fly too high over the water and will often disappear when their flight path takes them below the tree tops. The duck reflections angled to show their lighter undersides, while the actual birds blended in with the vegetation. I might have missed them otherwise. Thank you, reflections!

“I realized (epiphany!) that what I typically look for in nature are breaks in the calmness.”

And then I found this small, circular, well-maintained opening through cattail reeds. What would have made this well-formed and well-used tunnel to another world? Maybe a swamp or song sparrow? Probably not a wren, I hardly see them here. A small mammal, possibly a rodent or shrew, or even something else?

I don’t have answers to these questions, and it will be fun to see what turns up, especially after things freeze. The coolest thing for now is how the opening was found. The tunnel points down (or up depending on how you look at it) and is not visible from the spot I typically observe from. The refection was at the perfect angle to expose the opening, which I clearly would never have seen without it. I think I may even 🖤 reflections now.

How many more subtle secrets do reflections hold? It’s all a matter of perspective I guess. Whatever gets you out there.