Protecting the Wild Nature of the Schoodic Region

Updated 2/15/2018: In 2018 alone, MCHT conserved 376 acres surrounding Forbes Pond, which was the fourth project at Forbes Pond within three years, and has resulted in protection of nearly the entire periphery of the pond. In 2018, MCHT also assisted other organizations to help conserve an additional 348 acres. 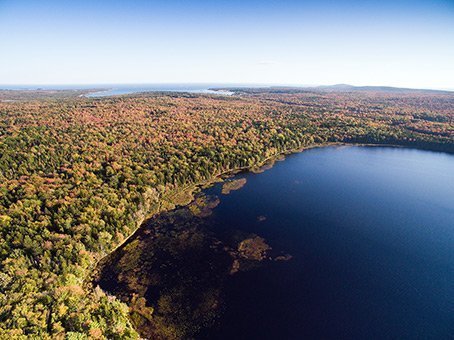 “This is what we can promise the future: a legacy of care. That we will be good stewards and not take too much or give back too little, that we will recognize wild nature for what it is, in all its magnificent and complex history—an unfathomable wealth that should be consciously saved, not ruthlessly spent.”

Maine’s Schoodic Peninsula is one of only two places on the East Coast (the other is also in Maine) where inland forest stretches to the coast in a contiguous, unbroken line. When describing the specialness of this region, Maine Coast Heritage Trust (MCHT) Project Manager Bob DeForrest recalls a recent trip in which he (almost literally) ran into a moose—an increasingly rare experience along the coast. “On the Schoodic peninsula, you get a sense of connectedness to the inland woods through the wildlife you see,” he says. “You see evidence of bears, moose, beavers and other mammals, and a wide variety of wading birds and waterfowl.”

MCHT and its conservation partners have been working to protect land and wildlife habitat in this region for the past 30 years. This year, we took a big step toward realizing that goal: MCHT, Frenchman Bay Conservancy (FBC), and 16 other project partners received a $1 million North American Wetland Conservation Act (NAWCA) grant administered by the U.S. Fish and Wildlife Service.

Other recent conservation successes in the region were key to leveraging the grant and included Outer Bar Island, Bean Island, and 65 acres of Taft Point in Gouldsboro. Grant monies will be put toward conservation of 2,196 acres of uplands and associated wetlands, including Stave Island and Forbes Pond in Gouldsboro, and more than four miles of shorefront along West Bay Pond and Lower West Bay Pond.

MCHT has two years to raise the remaining funds to protect these key “stepping stones” of land, which are critical areas of refuge for bears, moose, beavers and other mammals, and a wide variety of wading birds and waterfowl. “We’re making significant strides toward our shared vision to enhance wildlife connectivity in the Schoodic region. And the NAWCA grant is confirmation of what we and our partners have long believed: this wildlife corridor is of national significance,” says DeForrest.