“Terry Towne is one of the best field naturalists and all around land stewards that we have ever met. He carries a complete library of Peterson Field Guides around in his head,” shared Tim and Bev Stone in July, after a 5.5-mile hike along the rocky shores of Frenchboro Long Island. Over the summer, MCHT sponsored this tour and fourteen other guided trips featuring coastal and island preserves from Casco Bay to Eastport.

History came to life on many of the trips. MCHT Steward Amanda Devine shared her extensive knowledge of Malaga Island: the day to day lives of the mixed-raced community members that once lived there and the details of their removal by the State in 1912. On Treat Island, in Cobscook Bay, MCHT Steward Deirdre Whitehead led a group on a walk through time featuring stops at a monument to a revolutionary war hero and the remains of a Civil War era battery. 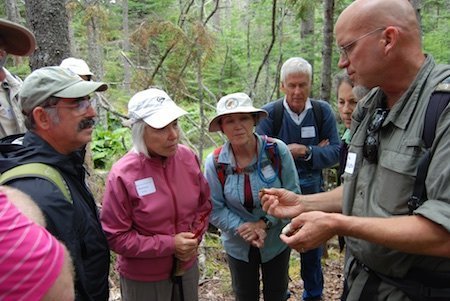 On other adventures, the focus was on the observation of native flora and fauna. MCHT Steward Kirk Gentalen pointed out mushrooms, slime molds, and birds during a trek around the Basin Preserve on Vinalhaven. He also provided intimate views of sunning harbor seals through his spotting scope. While cruising through the islands of Merchant Row in late July, folks spotted two predatory bald eagles perched in the tall firs of Eastern Mark Island, as adult great blue herons stood guard over their rookery.

Sally McGonagle summed up this summer’s slate of tours best, after an enchanting trip to the Goslings in Harpswell. “It was a near-perfect day! Thank you so much. Enjoyed every minute, including all the fine people.”

Stay tuned in the spring of 2016 for next year’s list of summer field trips. Maine Coast Heritage Trust members receive first notice and discount to all our guided field trips. If you’re not a member, consider becoming one today!

In the meantime, visit our Events Page for information on other opportunities to experience MCHT preserves in the months ahead.