The other day, I wondered out loud: “Maybe the next column should be about baby birds.”

“Baby animals would be better,” responded my son Leif.

“You are right,” I replied.

So there you have it: you can thank Leif for the baby animal photos.

The size of St. George peninsula’s critter population ebbs and flows with changes in season and resource availability.

Take the month of May, for example, when the peninsula sees an uncanny rise in population related to increases in daylight length and plants making food and turning things green.

Through the magic of migration, the power of the combustible engine, and some hardy overwintering techniques, yards that were quiet and seemingly bare a few months prior catch life. Literally overnight the peninsula’s population can double in size (songbirds migrate at night), if not by more.

And even though some birds (and insects and mammals, too!) do pass time on beaches, the peninsula’s animals are not here to lounge. They are here to mate and raise their young, an undertaking that requires constant vigilance to give their offspring the best shot at survival.

With that in mind, each June the peninsula’s already increased population enjoys a significant bump in numbers, with the woods and fields crawling with youngsters (in some cases literally).

Mammals that overwinter in St. George start their courtship and mating rituals in winter, before most songbirds arrive or insects wake up. The strategy remains the same though: mammals and birds time their youngsters’ food independence (the weaning process) when food resources are rich and plentiful and they have the greatest shot at survival.

Lately, we’ve heard talk of foxes carrying young pups across Watts Avenue. Seems they’re being a little overprotective, as Watts is not a very dangerous road, but maybe the road wasn’t the danger they were avoiding. Whatever the case, relocation can be a good survival tactic.

Rumor has it a group of five young raccoons have been spending quality time in the neighborhood (tip of the hat to the Delaneys for the heads up on this masked crew).

Given their high level of activity, the raccoons had to be at least ten weeks old, which puts their birth in the early part of April. With a little more math and a glance at a calendar, we can move further back in time to account for the Raccoon’s nine-week gestation period. That has us looking at an early February (roughly) successful mating “incident.”

Once again, heat-generating activities during the coldest of winter stretches provides some sweet, fuzzy entertainment in June. What a world! Now, if every pair of raccoons on the peninsula had five young? Well, you can do the math…population explosion!

Listening can be a key to finding baby birds. Just the other day Leif and I heard the begging cries of nestling birds as a cardinal flew out of one of Suzanne’s shrubs. We put one and four together and figured we’d poke our heads into the canopy and maybe find us some young cardinals!

It only took a few moments to locate the nest, complete with four now-silent heads pointing up and giving us the stink eye. Lack of the color red and a seed-cracking bill tipped us off that this was no cardinal nest. We watched the nest for about a week and as the nestlings developed it became clear this was a gray catbird nest.

Even though we kept a close eye on the shrub, never once did we see the adults enter or leave the area. It was a lesson in stealthiness as good parenting technique. On a personal note, it was also the first active catbird nest I have ever found (thank you, cardinal). How many other pairs of birds have sneakily added four young to the peninsula’s critter population?

With any fluid population though, the number of individuals will peak at some point and then begin an inevitable decline. Ducks with young are an observable example of this, and it was also exemplified on repeat trips to watch common eider families at Marshall Point in June.

A female eider averages four or five fledglings per nest (one nest a year!) and at Marshall Point (and other locations most certainly) it’s not uncommon to see multiple females bring their young together and form rafts of 15 or more little, bobbing duckies. It’s one of those “safety in numbers” things—the best position for your young to survive. 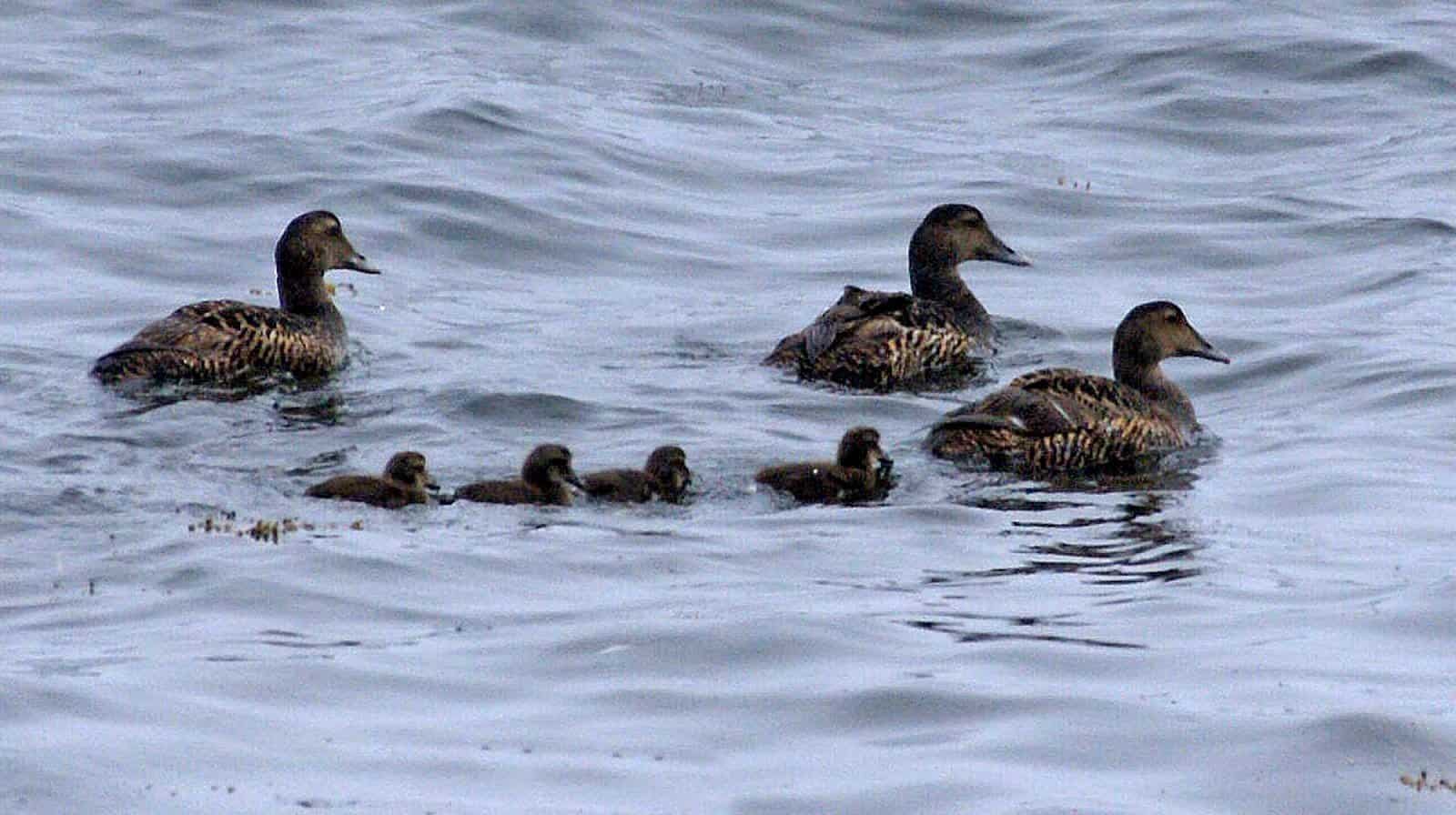 Watching this year’s local raft dwindle from twelve to four youngsters (probably less by now) reminds us that there isn’t always safety in numbers, and that many species of duck will have multiple young every year for multiple years in order to simply replace themselves.

The disappearing eider ducklings also remind us that young bald eagles need to eat. Adult bald eagles start sitting on eggs in the heart of winter so their young will be fledging the nest just when these super buoyant, tasty ducklings are numerous and ripe for the picking (amongst other food species). Babies being fed babies. That’s the food chain, baby.

I got a lovely text the other day from Brian and Meg (and Aletta) from across the road saying a falcon was eating a robin in their backyard. Would I like to come over for a look? (Have I mentioned how much I love the neighborhood?)

By the time I got over the Merlin Falcon had feathers flying and a sizable pile of discards surrounding the Turdus carcass. It dawned on me that the robin, which had only moments before been a meal, could easily have been the youngster I mentioned ina previous colum . Survival instincts were not strong with that one. But a Merlin needs to eat and feed its young, as do the fisher, coyotes, and owls. Watching a predator at work can be awesome!

While we celebrate youth, rebirth, and new life each spring, as summer wares on the glaring and harsh reality becomes clear: most young will end up in another critter’s belly.

It’s beautiful in its own way, of course. The persistence and perseverance of those animals who watch their young disappear each summer is a marvel as well. Keep trying ‘til you die! All of these stages of life—and death—amaze me.