These June days, it’s good to have a strategy whether you’re heading to the grocery store, ferry terminal, or Bert’s Machine Shop. I go with a plan that leaves little-to-no room for browsing. It’s about keeping social distance, minimizing exposure. When you get down to brass tacks, it’s a plan for survival.

Of course, June is also a time for plants. Take some sunshine, mix in a little rain and warmth, and blam-mo—your plant is a-growing! June—am I right? To make things even better (and prettier), many plants come with flowers.

Strictly speaking, flowers are tools that plants use to attract critters in hopes they will assist in the plant’s reproductive success. The name of the flower game is pollination and the goal is to pass genes on to the next generation. While flowers are all about the continued survival of a species, this column is about the strategies individual plants employ to survive.

Take the plant bunchberry (Cornus canadensis) for instance. Bunchberries are in the dogwood family (Cornaceae) and are essentially miniature versions of dogwood trees. Often abundant and ubiquitous in the Midcoast Maine woods, it is not uncommon to come across blankets of their small, whorls of leaves covering a forest floor. 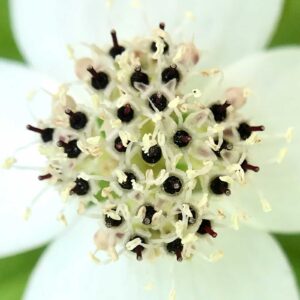 In June, bunchberries are in bloom and while many plants will have four large white bracts that look like a flower, the actual bunchberry flowers are found in a tiny cluster at the center of these bracts. Later in the season, after pollination, the flowers are replaced with clusters, or bunches of red berries. A bunchberry stand may leave an observer with the impression of the robust population of an annual flowering plant. This is not the case, of course.

Beneath a carpet of bunchberry are a series of woody rhizomes. A rhizome, the actual bunchberry plant in a sense, is a continuously growing underground stem that pumps out dozens (to hundreds) of bunchberry plants each year. The plants growing off a rhizome are genetically identical (clones, if you will) all photosynthesizing and sending energy back to the mother rhizome.

This growth strategy can result in plants from an individual rhizome covering yards of forest floor. What looks to be hundreds of different plants actual rises from just a handful of individual rhizomes! The rhizomes survive for years and in the right conditions can thrive quite handily. It’s all on the plant’s survival strategy terms. 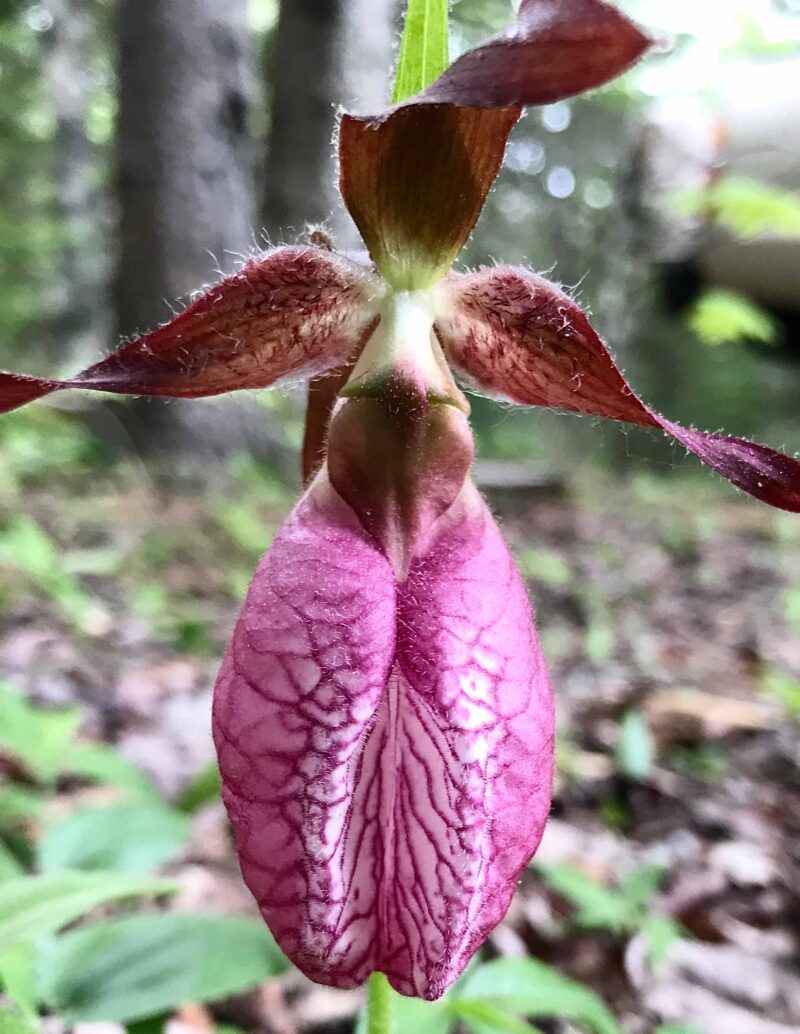 Another stop-worthy June flowering plant is the pink lady slipper (Cypripedium acaule). In general, orchid flowers are striking and come with their own cool and specific symbiotic relationships with pollinators. The pink lady slipper does not disappoint. But it’s immediately after the flowers have dried and gone (pink no more!) that the plant’s survival strategies kick in.

An individual lady slipper plant starts, as many good plants do, as a seed. Lady slipper fruit capsules split open and release thousands of wind-dispersed seeds. These seeds are among the lightest in the plant kingdom and carry no “meat” or “fruit” to help with germination and initial growth.

Instead, the seed produces a mass of cells known as a “protocorm,” which must connect with a symbiotic, mycorrhizal fungus (Rhizoctonia) before growth can occur. This connection may take time, and a lady slipper seed can remain viable for up to eight years (in the right microenvironmental conditions).

Then the relationship begins… The fungus aids in nutrient absorption for the plant, and in return the lady slipper (eventually) shares sugars it produces from photosynthesis with the fungus. It can be years between plant/fungus connection, pre-growth and initial growth before a lady slipper even thinks about producing a flower. 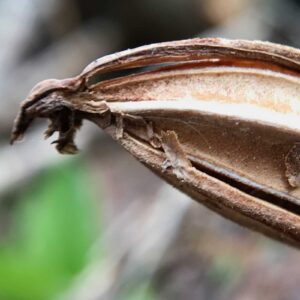 By the time you see a lady slipper flower in the woods the plant has spent years invoking a classic survival strategy, based on chance and a symbiotic relationship with fungus. Mostly appreciated one month out of the year, a flowering lady slipper represents years of work, effort, and growth, which only adds to their mystique.

The final, and dare I say most aggressive survival strategy for this column—parasitism—has been represented by one-flowered cancer root (Orobanche uniflora), a member of the broom-rape family (Orobancheae). 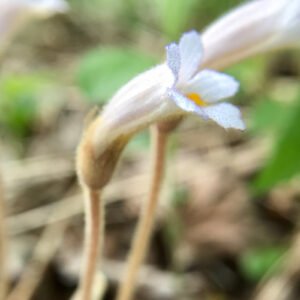 This has been a “cancer root June,” as two observers, one on Vinalhaven and one in Tenants Harbor, have sent me reports and photos of cancer root flowers on their respective properties. Both observers mentioned the rarity of this plant in their personal experiences; one hadn’t seen the plant before and the other had seen it only once in 40 years of observing! Needless to say, I’ve been keeping my eyes open to this Orobanche since these reports came in.

Sure enough, on June 9th, I came across two large clusters (30+ flowers) of one-flowered cancer root while walking a property boundary on Vinalhaven (very cool activity). The flowers themselves were quite attractive, as flowers often are. The plants themselves—the stem, the bracts, etc.—were white from a complete lack of chlorophyll, and complemented the cancer root’s single white flower nicely. No chlorophyll means no making your own food (eat local!), but there is more going on with the cancer-root beneath the observable surface. 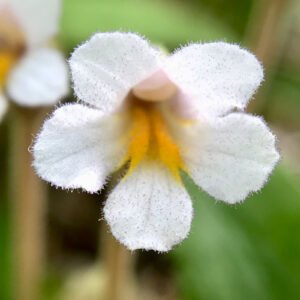 As a parasite, the roots of our favorite Orobranche tap into a variety of plant species for nourishment. This includes members of the genus Sedum as well as representatives of the Saxifragaceae and Asteraceae plant families. Being a parasitic generalist, the one-flowered Cancer root is able to maintain an extensive range that covers the entire lower 48 and much of Canada. Now that is surviving.

Recognizing adaptions and survival strategies of plants can raise a species status to “pretty cool” in an instant. For a bunchberry rhizome the survival action is year-round, where pink lady slippers are all about a symbiotic relationship with fungus that is years-long in development.

A cancer root’s parasitic strategy is more “on the edge” than the other two—completely depending on another species for food. But it’s a strategy that has resulted in the most widely dispersed plant of the three—survival strategy indeed!

Parasitic, symbiosis, and rhizomes are three strategies that work! The proof is in the plant survival!