Common redpolls. Photo by Kristen Lindquist.
Stories from the Coast >

As if winter weren’t “cool” enough (Get it? It means, like, two things?), some special—and somewhat surpising—avian species have been spotted on the Maine coast this winter.

Why is that, you ask?

Not your average migration pattern 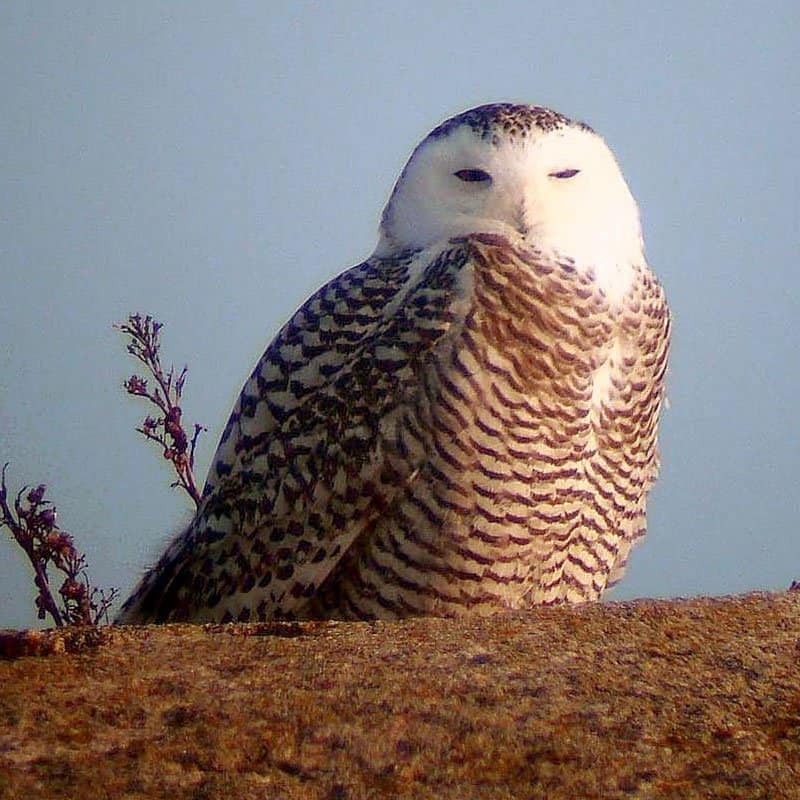 Every so often, a substantial drop in resources to the north can result in a southern invasion of huge numbers of affected bird species. When it occurs, this pattern is (lovingly) referred to as an irruption.

Raptor species such as Rough-legged Hawks and Snowy Owls irrupt on somewhat regular cycles connected to population cycles of grassland/field rodents (four-to-five-year cycles) and snowshoe hares (ten-year cycles).  These are irruptions you can count on and are appreciated accordingly. 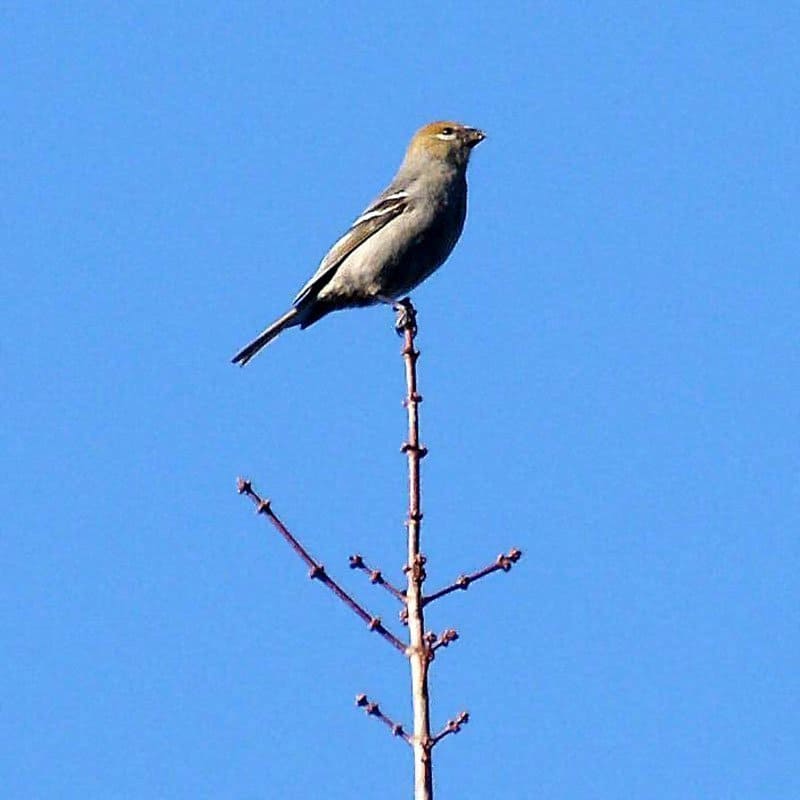 On the other hand (or wing), seed-eating songbirds that feast all winter on conifer cones, catkins, and fruit, irrupt on an irregular and unpredictable basis, depending on seed crop failures.

Under such circumstances, Winter finches (Common and Hoary Redpoll, Evening and Pine Grosbeak, American goldfinch, Pine Siskin and White-winged and Red Crossbills) may show up in big numbers, lighting up forests and feeder stations with energy and color.

The McConochie feeder system in Tenants Harbor recently played host to more than fifty Evening Grosbeaks! About the size of a robin, Evening Grosbeaks bring a striking pattern of bold yellows and black with white wing patches—with a honkin’ seed crackin’ bill to boot!

The McConochies report that they’d never seen Evening Grosbeaks on their property before, and that after a week of gradually diminishing numbers the birds finally cleared out, taking their irruptive ways to new grounds.

Other species spotted in the Midcoast 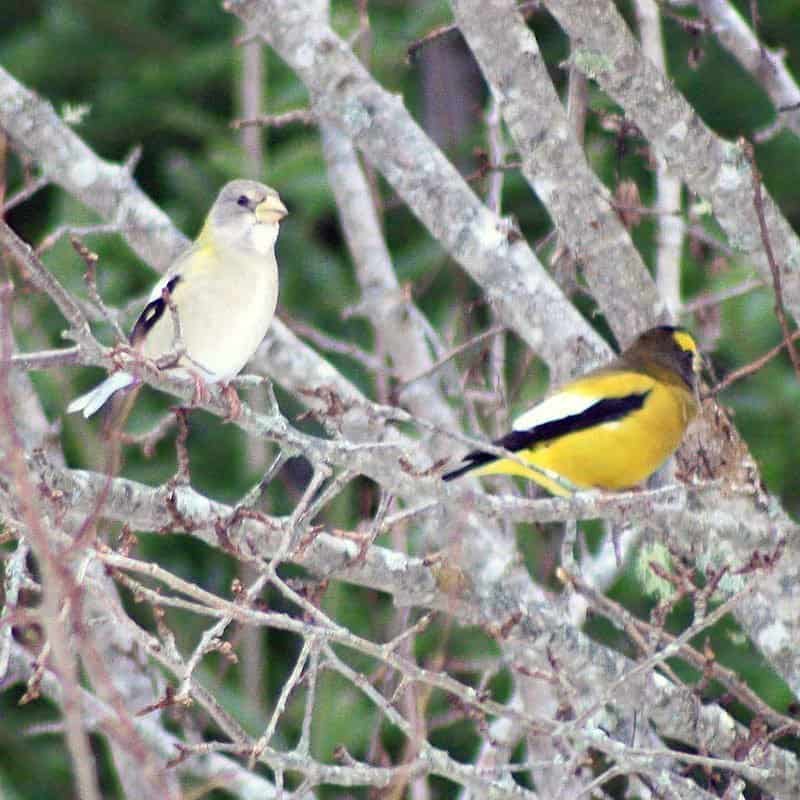 And Evenings were not the only Grosbeaks that found their way to St. George after the cold stretches and snows of autumn.

Small numbers of Pine Grosbeak have been spotted throughout peninsula forests as well, and their calls add an alternative to the sound of a cold breeze!

American Goldfinch, Common Redpoll, Red Crossbill, and Pine Siskin have also been observed on the peninsula as of late—those are some seriously hardcore song birds that regularly overwinter well north of Midcoast Maine.

With giddy anticipation (giddypation) I look forward to a finchy winter and whatever other species may work their way down the peninsula. Only time will tell!

Waxwings on the lookout for berries and fruits

Another winter fruit-reliant species with irruptive tendencies recently observed on the peninsula is the Bohemian Waxwing.

While Cedar Waxwings are a common species and sight in St. George during the summer months, their northerly cousins tend to stay at upper latitudes unless forced south by a lack of food. 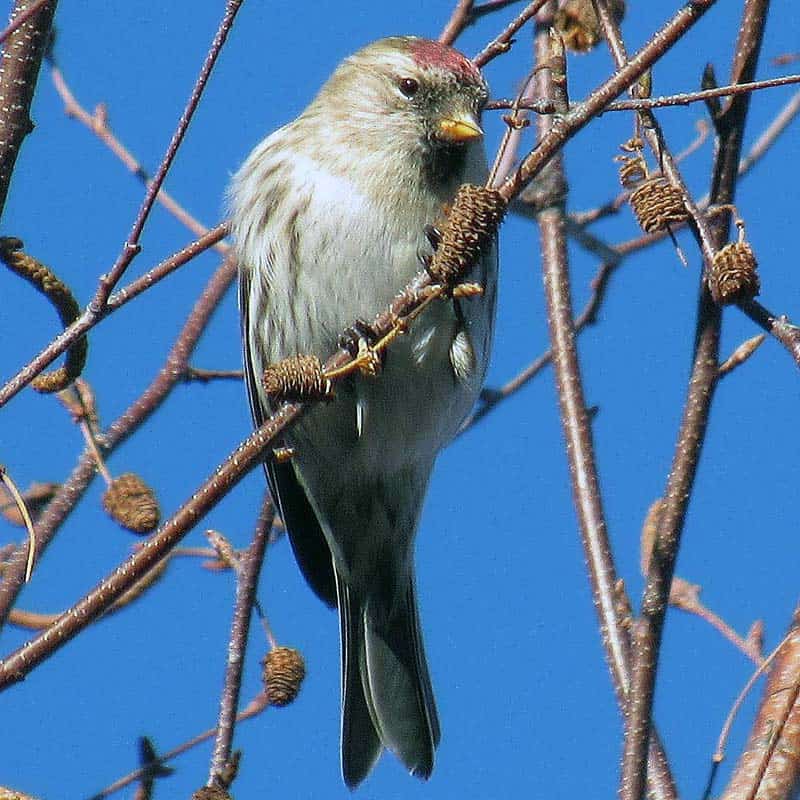 These medium-sized songbirds love to feast on plants that hold berries and fruit into the winter, as well as leaking tree sap. Bohemians will even join Cedar waxwing flocks that may be overwintering in neighborhoods. Picking apart a flock of Waxwings often turns up a Bohemian treasure or two this season!

Where there is prey… look out for predators

When these irruptive songbirds invade an area in high numbers, predator species may irrupt as well and follow the songbirds south.

The Northern Shrike is a predatory songbird that makes occasional irruptions depending on both songbird and small mammal population abundance to the north (broken record I know!).

These killers—nicknamed butcher birds for their habit of impaling prey on thorns and barbed wire—can send winter finches darting for their lives in fast chases and aerial pursuits. It’s a predator/prey relationship that migrates—part of a northern ecosystem that sometime visits us for the winter!

It’s important not to take things in life for granted (woah, that’s deep). Irruption, I’d argue, is one of those things. Thankfully, this winter season is starting off somewhat irruptive already. Let’s keep our eyes and ears open, because who knows when we’ll see these species again?