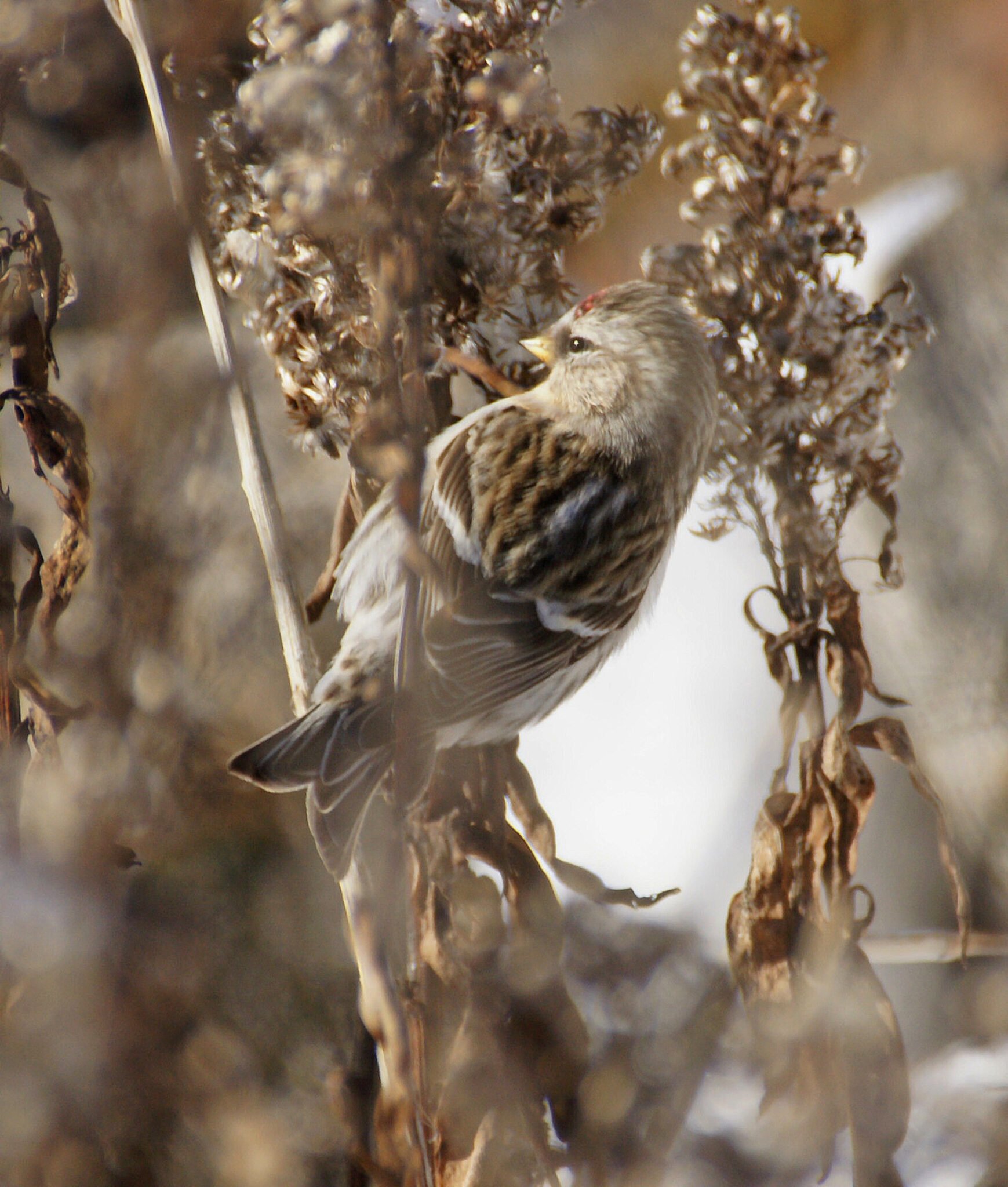 SONY DSC
Stories from the Coast >

Christmas Bird Counts (CBCs) are not supposed to be fun. Unless you think fun is counting all the birds you can from dusk to dawn, one mid-December day in midcoast Maine. (Doesn’t sound that bad when you say it out loud.)  I’m not sure how the date for the CBC is chosen, but it is adhered to regardless of ground, weather, or human conditions.

You see, the CBC is not a day of sitting down and watching bird behavior, or a day to relax and see what passes through the yard, the neighborhood, the picnic area. It isn’t a day of talking either, unless it’s discussions about bird identification. These discussions are often short and quiet, since I’m by myself all day. It isn’t a bird walk, where the goal is for everyone to see every bird (I do like those walks). This is different, this is focused bordering on hard core, bordering on obsessive. The CBC is a day of “citizen science,” of adding to the longest running survey of birds in the world, 100-plus years and going strong. This is a day to learn and at a minimum, add good knowledge to an ever-expanding set of data. Good knowledge is serious. I train year-round to prepare for the physical demands.

The chosen date for 2020 was December 19th. Focused and jacked up on coffee, I headed out to my favorite owl spot in St. George, the Town Forest Loop Trail on Kinney Woods Road, in hopes of hearing a hoot or two. It was 5:00am and 15 degrees, but that was fine. It was all for good data and that is hard to argue with. This was my fifth year assigned to my “piece of the peninsula,” a roughly six by two-mile section of the St George Peninsula, and happened to be the first CBC where I saw/heard no owls! They say, “zeros mean so much” (tell that to my frozen toes,) even though zeros are not what you are hoping for on CBC days. It was a beautiful morning and I got to see Evening Grosbeaks first thing. Never disappointed.

I scanned bird feeding stations in my section, which turned up Red-Bellied Woodpecker and American Tree Sparrow, before I made my way to the Fort Point Trailhead. Fort Point is the best chance in my section for big numbers of ducks. From the remains of the old fort, both dabblers and divers can be seen, and depending on conditions the number of ducks can be in the hundreds if not thousands in the viewshed there. 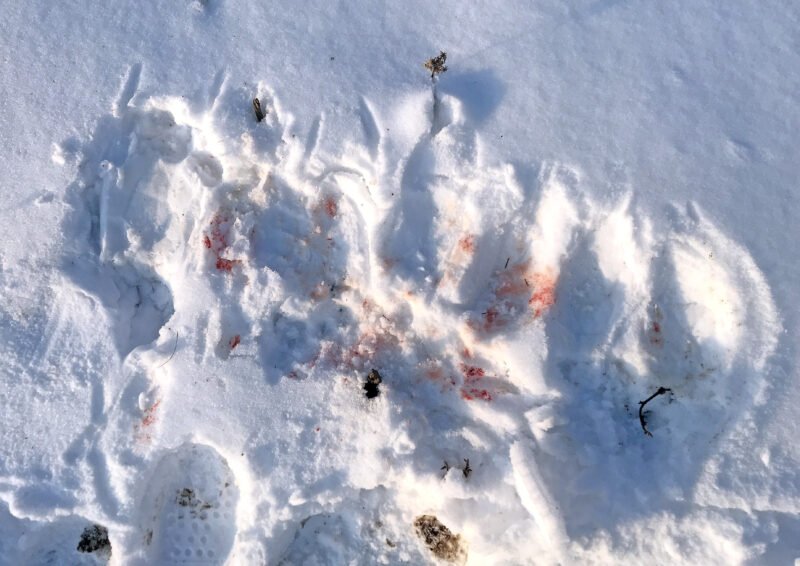 Signs of a successful duck hunt

Pulling into the Fort Point parking area, I noticed two trucks that I also happened to notice on my way to the search for owls. These trucks had been there for a while, maybe even overnight. I don’t often see people on the CBC day, you can chalk that up to weather, which has usually fallen on the inclement side of things over the years.

Anyway, half-way down the trail I was approached by a large fluffy dog. (I am not good with dog breed identification. This one had fur and was fluffy.) It was sweet, which was good as I don’t always bring out the best in dogs. A few moments later I saw two gentlemen coming up the trail, decked out in camouflage and carrying bundles or packs.

Ahhhh, I thought to myself, those trucks are from duck hunters. As they approached and we exchanged greetings I foolishly asked if they “had any luck” that morning despite moments, before noticing the Canada Goose in one man’s hand. He said the hunting was good and that his friend had a Mallard drake in his pack as well. He then noticed my spotting scope and ask what I was up to. With a chuckle I said, “Well, I’m helping out with the Christmas Bird Count and I’d like to count your two birds.” They knew of the CBC and seemed excited that I was not only participating but that I wanted to document their hunt. We talked about what other sea ducks were to be found, we asked the right questions, had the right answers, and everyone appreciated each other’s knowledge. We all wished each other good days and I headed to the fort. That was definitely the best interaction I’d had with anyone on a CBC day.

The waters around the fort were loaded as always, and two Red-Throated Loons ended up being the highlight finds as far as birds went. What was of greater interest were the Grey Fox tracks and trails in the snow as they hunted voles (my guess) in the fields I wish it was the “Christmas Warm Blooded Animal Count,” but it’s not and for the sake of professionalism I forced myself to get back to birds and not follow the trails. Too many distractions! 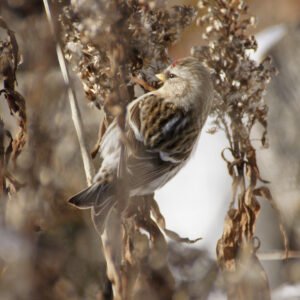 A Common Redpoll on Seaside Goldenrod

From there I headed to Clark Island and I didn’t even get onto the causeway before the only Common Redpoll of the day (for me) popped up in a patch of Seaside Goldenrod. Redpolls are a type of winter finch who may or may not turn up in Maine any given winter depending on food situations far north of here. Between the Redpoll, White Winged Crossbills, and the Evening Grosbeaks I had mentioned earlier I thought the day was pretty good on the winter irruptive bird scene.

Fresh snow on Clark meant lots of porcupine distractions as well. Fortunately, their trails were short and ran along the human ones. I had my ears open for birds as I found a new (for me) porcupine den, confirmed residency in another den I have watched for years, and checked out 3 different sets of trails total. In a way I am glad I didn’t see a porcupine, that would’ve been way too distracting. 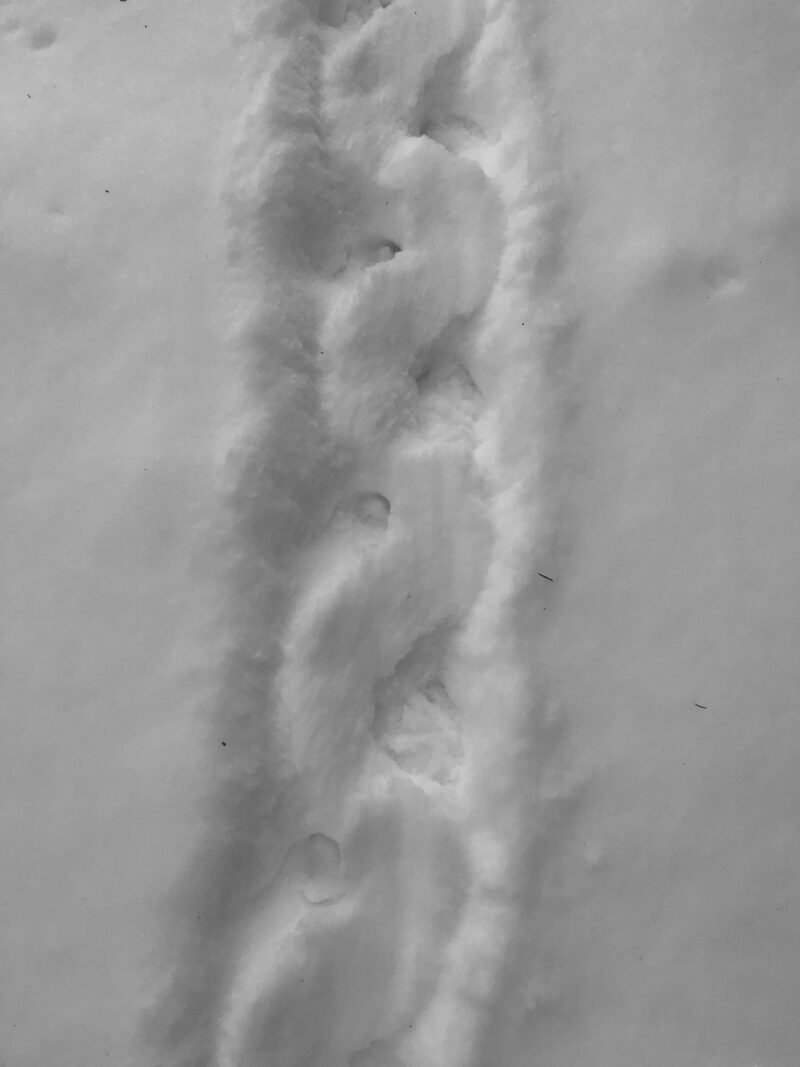 My final stop for the day was at Georges River Land Trust’s Riverview Hayfield Preserve. The fields there are inviting to Short-Eared Owls (if I was an owl I would hunt there) and I saw one at dusk for the CBC in 2019. Other raptors and predators are attracted to the fields as well, and on this particular visit, I counted a Rough-Legged Hawk and a Northern Harrier. Not bad!

What was even better was the conversation I had in the parking lot with a second group of duck hunters as they secured a canoe to their truck. I asked if they “had any luck” which was not such a silly question this time since their harvest was already out of sight and packed away in the vehicle. They had gotten five Bufflehead hens and a Mallard drake and were psyched to talk about it. They saw my scope (once again) and asked what I was up to. I mentioned the CBC, with which they were familiar and were happy that I wanted to count their hunt. I told them of my time at Fort Point and they told me of a Green-Winged Teal they had seen earlier. It was a session of sharing knowledge and appreciation for different yet similar ways of looking at nature. It was easily one of my top two CBC interactions ever. 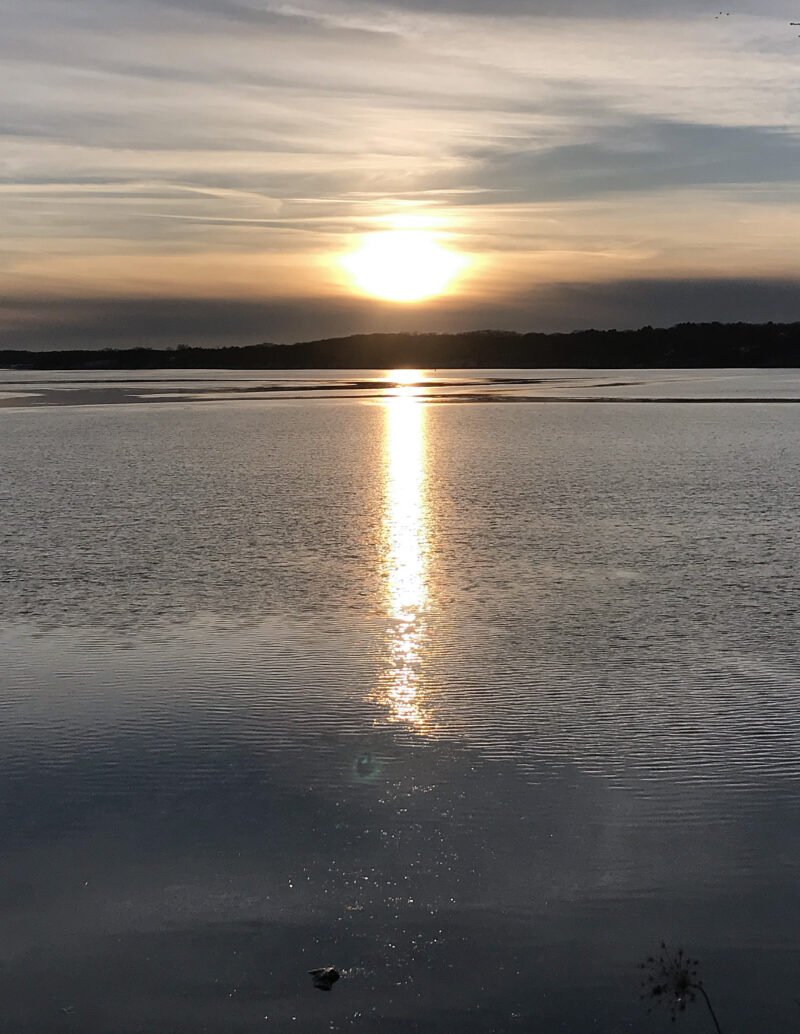 End of day sun on the St. George peninsula

I ended up following the path they dragged their canoe down as it had packed the snow nicely, to where they had accessed the water. Bloody patches and bird outlines marked the spot where they took photos with their birds. I was happy to document, happy to talk with them, but mostly happy that they had these public places and access points for hunting. I realized that I didn’t know of any other public access, other than Fort Point, to the river and even though they had to drag their canoe and the guys from the morning had to carry their stuff a half mile (maybe?), they still could do it. While I always like to see people outside on the land and I follow a “whatever gets you out there” kind of ethos, these hunters had a different type of knowledge and awareness that was fun to tap into. I look forward to crossing paths with them again. And counting their birds, not that they needed me to say they counted.