Photo of a yellow-billed cuckoo, snapped by Kirk for the Vinalhaven Sightings Report
Stories from the Coast >

Once upon a time—a long, long time ago—I was accused of “networking.” It was at a Land Trust Conference (of all places) and it was said to my face (of all places)! From my perspective, it seemed like slander—or at least a misinterpretation. I was just talking to someone about birds!

I could be wrong, but in my mind, networking implies some kind of ulterior motive. What could have been in it for me in chatting about blue-grey gnatcatchers? Now, I have been called worse than a networker. I was once called a yuppie, and twice at Phish shows I was mistaken for a cop (those silly phish heads, rolly pollie fish heads). Anyone who knows me knows I am neither a yuppie nor a police office, and that I wouldn’t knowingly participate in networking.

The blue-grey gnatcatcher conversation was along the lines of my favorite chats with friends. It’s fun to share nature stories, and I learned long ago that everyone has a nature story they want to share. I love to hear what other folks are seeing, be it on Vinalhaven, around St. George, elsewhere along the Midcoast, or, heck, just about anywhere. It’s a great way for me to learn (ulterior motive?). You can observe by watching, and you can learn by listening. And I am a good listener, too—or so I hear.

Anyway, there are plenty of ways that people share nature sightings… Rare Bird Alerts, for instance, started way back when people had phones in their homes. People would listen to a weekly message listing bird sightings, which was recorded on an answering machine at some Audubon Sanctuary. These days, through the internet and social media, getting photos and reports posted and shared is easier than ever, and even I am a fan of the nice photos people post on Instagram. (If you get a chance, check out my handle – @baldfulmar. This is not networking.)

One forum for sharing nature sightings over the last 12 years is what we (the royal “we”) call the Vinalhaven Sightings Report, or VSR. A joint effort by Maine Coast Heritage Trust and the Vinalhaven Land Trust, the VSR started as a bi-monthly email newsletter providing a (somewhat) central location for observers to share nature sightings and photographs.

The VSR encourages observers to share their nature sightings on Vinalhaven. After the first few years, loyal VSR contributor and reader, former Vinalhaven Land Trust Board President, and good friend Pat Lundholm designed the blog format that the VSR still follows today. Check it out. (This is sharing, not networking.)

Check out the vinalhaven Sightings Report 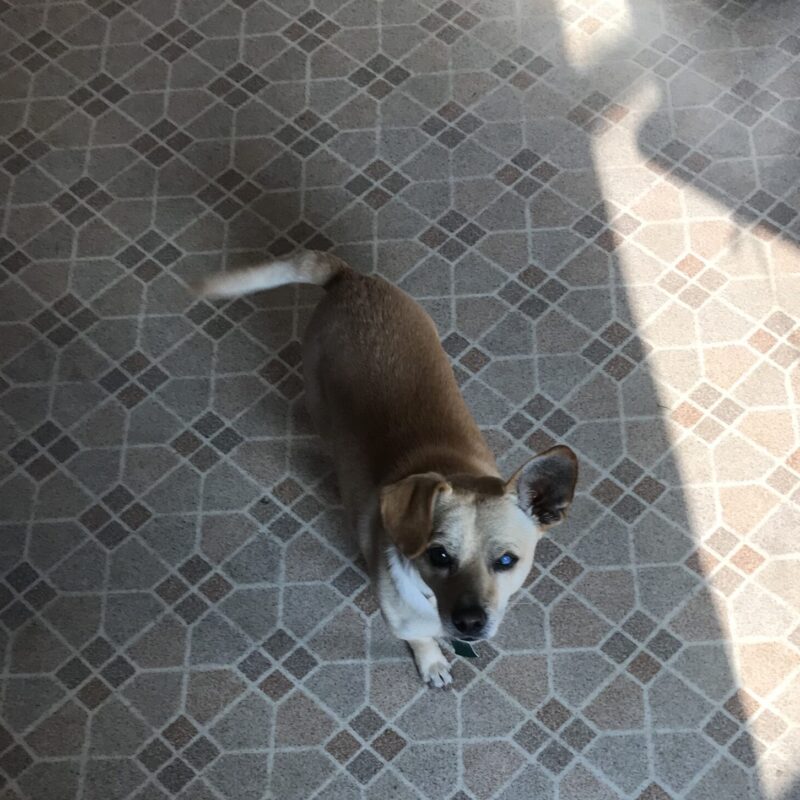 This is all fine and good, but why am I writing about this? Well, our dog, Frankie, recently hurt his back. The change in lifestyle was quick and dramatic – he went from Frankie to zero in a matter of hours it seemed. Now, I love Frankie and my work is flexible (I am writing this at 2 a.m.!), whereas Amy and Leif’s school schedule is not. It became my job to help Frankie be comfortable during the day so the healing process can be smooth as possible.

What this means is that a fair chunk of my time at the homestead has been spent watching a pained pup pull himself around the yard. I saw nature stuff in the yard for sure, enough to write a column or two about, I suppose. All the while, sightings for the VSR were coming in. More than ever, I appreciated the reports.

On the day Frankie and I watched a merlin falcon catch dragonflies in the front yard, the VSR received reports of raptor migration on Vinalhaven. Multiple Philadelphia vireos were reported from Greens Island on the same day they were reported from Monhegan Island. This sharing has brought knowledge and texture to the life of this home-bound nature bum. Just like that, the world felt a little smaller. We gain knowledge with a little help from our friends….

The reports and lists are wonderful, and the photos sent to the VSR help make it a robust and well-rounded experience for visitors. Some “readers” even confess their tendency to skip all writing completely and just look at the photos. Photos the VSR receives range from sunsets and landscapes, birds and critters, to tracks and scat (some of my favorites).

Vinalhaven resident Hillary Bunker always shares great photos and recently sent in this photo of white buzz on the bottom of a branch. Hillary and I eventually identified this white growth as coarse wax filaments from a woolly alder aphid! Aphids (and other insects) will secrete such waxy substances to conceal themselves, as to keep from drying out and to protect them from predators. One white fuzz predator to look for is North America’s only carnivorous butterfly, the harvester, whose caterpillars eat the aphids. I know what I’ll be looking for today and the rest of the fall! Wouldn’t that be fun to find, and I’m looking because of Hillary’s photos! Thanks for the direction, Hillary! 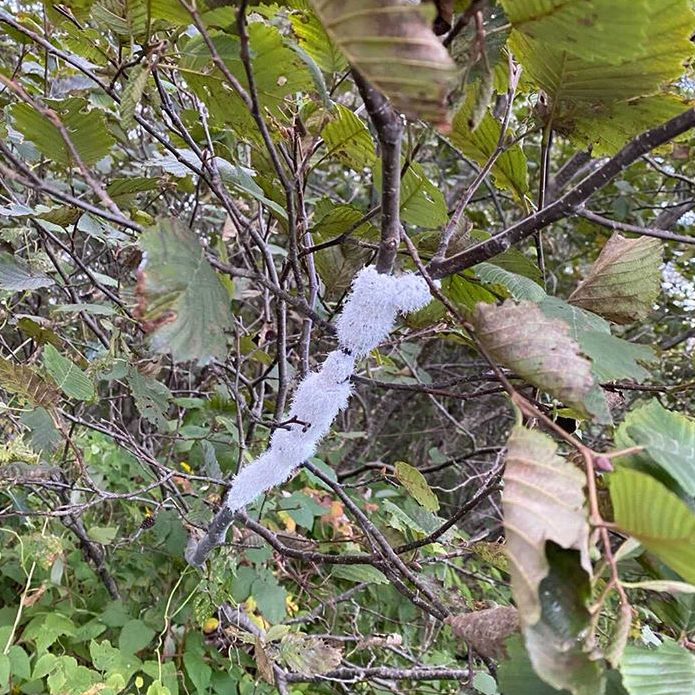 Sometimes folks send in photos so gross that the photographer wants to share while not wanting to be associated with the photo! One observer recently sent in this photograph of a botfly larva and the dead mouse they pulled it out of! When you observe nature you see the good, the bad, and the disturbing… but it’s all good for the VSR! It’s an art to be so gross and so beautiful at the same time.

John Drury (long-time friend and VSR contributor), captain of Skua, recently shared a photo of an Atlantic white-sided dolphin leaping out of the water just inside of Seal Island. John regularly takes researchers, volunteers, and groups out to Seal and Matinicus Rock and is always happy to share sightings via the VSR. John has shared some great stories and photos over the years—an ancient murrelet, sabines gull, and the locally famous red-billed tropicbird, to name a few.

These days MCHT is not offering nature walks or evening slide show programs, and probably won’t be for a while (we’ll see). It feels even more important to share where we can. There is so much to experience. So go out there, take a look around and share it with someone. Then, ask them what they’ve been seeing! There is a nature story or moment on the tip of everyone’s tongue. Be the good student. And thanks, everybody, for sharing!