Barred Owl. Photo by Jeff Romano.
Stories from the Coast >

Catching sight of an owl is always special. Even if the Great Horned Owl is flying away with your cat, chicken, or small child (never happened) you can’t help but mumble to yourself, “man, that was so cool.”

The Order Strigiformes (this is not a Harry Potter reference)

In the Avian Class (birdies, if you will), owls alone make up the Order Strigiformes. The order can be split into two owl families: 1) Tytonidae (17 species of “barn owls”) and 2) Strigidae (164ish species of “typical owls”) for a total of 181 owl species worldwide.

In North America, we (the royal we) have 19 species of breeding owls representing 11 different genera and both families. In Maine, “Eleven species of owls live in or visit for all or a portion of the year.”  With owls being so widespread, it’s no surprise that the St. George peninsula is a destination, hunting and wintering ground, and rest area for many owls each year.

For much of winter, the grassy ledges off Marshall Point are a great place to scan for Snowy and Short-eared Owls (and Rough-legged Hawks) hunting by perch or on the wing. In some irruptive years, Snowies have been so numerous on the peninsula that owls have ended up in St. George yards, perching on rooftops and bird feeders.

Night owls, common owls, and the most mysterious of all

Small numbers of Saw-whet Owls overwinter in the woods and even smaller numbers of Long-eared Owls hunt fields and field edges from perches. With their mostly nocturnal ways, these two species are tricky to observe, whereas a species like the Great Horned Owl can turn up just about anywhere.

You’re unlikely to see “rarity” species like Great Grey, Northern Hawk, and Boreal Owls. And then you have Barred Owls, which might be the most mysterious owl of the bunch. 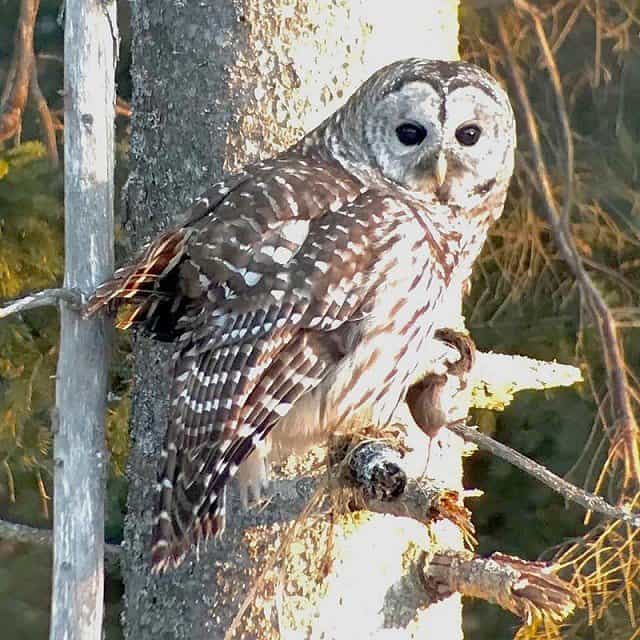 Barred Owls appear to be the most numerous owl seen and heard in St. George (by far). The chatty, year-round residents can be heard calling “Who cooks for you, who cooks for you all” in local woods just about any night of the year, and sometimes during daylight hours as well.

They are comfortable hunting when the sun is up and for the most part don’t appear to mind the presence of humans. We provide habitat and food for the rodents and shrews they love to mack on—they should be thanking us!

Barred Owls also leave sign of their presence in the form of pellets. Most birds eat their food whole, and many species will regurgitate the undigestible parts of what they ingest in the form of “pellets” rather than have it pass through their digestive system.

Owl pellets are (somewhat) famous, as they are loaded with bones and fur, and tend to stay intact for a long period of time (months even!). Pellets are a wonderful clue to an owl’s presence and diet, and they are as much fun to take apart as they are to find!

Look for good perches in areas where you have heard or seen Barred Owls and you are likely to find these balls of fur and bones. In a yard where we previously lived, one tree had 12 Barred Owl pellets underneath it! I checked under the tree daily (man, do I need a hobby) and often saw newly dropped pellets, but I never did see the owl.

Barreds: they are literally their own breed of owl

For all the pellets, all the chatter, and all their activity before dark, Barred Owls are hard to observe and there remains a lot of “unknowns” about their behavior.

They make a number of vocalizations other than their classic “who cooks…” call (from my extensive research, the function of this call remains unknown). Much of their courtship and mating habits are unknown as well—this from a species that is numerous and announces its presence loudly and often—almost begging to be observed. I think their use of tree cavities for nesting and (possibly) resting plays a role in this.

While other owls are easy to understand, Barreds tend to confuse. They are literally their own breed of owl.

Over the last month or so I have heard of more than reports of Barreds turning up in yards around the peninsula. Why is this? Are young dispersing? Is it a migration from the north? Or local owls hitting up rodent-loaded areas? Are Barreds more likely to hunt in the day when it gets cold? Unanswered questions that lead to more unanswered questions. So it goes.

And while we always feel lucky to have crossed paths with owls, there is the understanding that at least a chunk of the time when we see owls it is because they are stressed or hurting. A long-eared owl hunting at 2:30 in the afternoon is hungry. Hungry enough to break its “strictly nocturnal” (false) label with survival on the line.

Not saying we should release mice in our yards to provide meals for owls, but if you do find a compromised owl, the folks at Avian Haven in Freedom ((207) 382 – 6761) do a great job “fixing them up and getting them back out there.”