Magnolia warbler
Stories from the Coast >

Fact: most songbirds migrate at night. Every spring countless warblers, vireos, thrushes, and sparrows (among others) work their way north in search of space to breed and maybe a partner (or two) to share said space with. Some of these birds will pass through towns along the Maine coast, and some will stay to reproduce.

With each dawn another wave of hungry, migrating tweeters descends into local yards and forests after a night flight from who knows where. 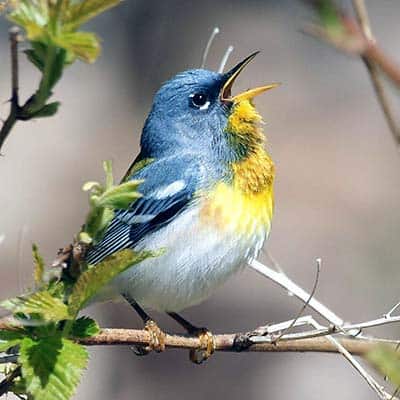 This “pre-breeding” songbird migration can be a delight to observe, with birds looking sharp and colorful and males singing their hearts out. With each dawn another wave of hungry, migrating tweeters descends into local yards and forests after a night flight from who knows where. The St. George peninsula, where I live, has so much habitat, the songbirds can turn up just about anywhere.

For me this is situation calls for a little birding by bike. On a bike you can cover lot of ground, be looking and listening for birds and stop (pretty much) wherever you hear something. On recent rides on the peninsula I’ve seen warblers such as Black and White, Palm, Yellow-rumped, Chestnut-sided, Yellow, Black-throated Green, Magnolia, and Black-throated Blue, as well as American Redstart, Northern Parula, Common Yellowthroat, Ovenbird, and Northern Waterthrush. With other songbird species such as Scarlet Tanager, Blue-headed Vireo, Brown Creeper, Winter Wren, and Hermit Thrush adding their songs to the mix it is a glorious time to ride around and listen. And the great news is there are still birds on the way!

And now to switch gears (get it?). The Delaney girls, Trinity and Serenity, and their super nice mom Beckie were kind enough to bring over the tiniest of Painted Turtles they found crossing the road just down from where I live.

Painted Turtles are the cool summertime turtles that you see on logs and by your bobbers when fishing—you know, the ones with red streaks on their face and legs that gives the species its common name. A little research shows they lay eggs in late spring and their youngsters hatch a few months later in August and September. This dude was so little it looked like it might have hatched that very day, which got me wondering, so what’s the deal with this one?

This Painted Turtle, which likely hatched in the early fall, overwintered in its nest and is just starting to make its way in the world.

Well, Thomas Tyning had the answer (as he always does!) in his Guide to Amphibians and Reptiles. Tyning writes, “The young painted turtles remain inside the nest cavity for varying lengths of time. In northern parts of their range, they may overwinter in their nest and do not emerge until the following spring.”

So, this little turtle hatched out of an egg late last summer and then essentially napped through winter in the underground nest where its mom laid its egg. Then just a few days ago it began to scurry and scrape its way out of the only world it’s known! Instead of racing ahead into adulthood, local painted turtles apparently take the “I’ll do that next year” attitude quite literally! A lifestyle choice that seems to be working out for them (if less so for me).

This dude was so little it looked like it might have hatched that very day, which got me wondering, so what’s the deal with this one?

This turtle was lucky enough to cross paths with Trinity and Serenity (undoubtedly the first humans it had ever seen!) who were ready to help and relocate the turtle to a nearby pond. The road is a dangerous place for turtles of any size and they often can use a little assistance to get where they are going safely. “Ain’t nothin’ wrong with helpin’ a turtle,” as they say (they being me).

New arrivals or last year’s models—either way there’s a ton going on outside these days. See you out there!