We’ve had an interesting stretch of weather this fall. Rains, winds, and now snow wreaked havoc on outdoor work schedules (namely mine) and gave the St. George School students two of the warmest “snow” days I’ve ever heard of.

Here was the silver lining: the local deciduous trees—maples, oaks, birches, etc.—lost their leaves. Seemingly overnight, trees that had turned yellow, red, and orange (or what I like to call equal parts yellow and red) quickly became bare, with fully exposed trunks (racy!).

We (the royal “we”) contend that this annual event makes the world a little safer, as the “pretty” colors can be distracting to humans at times when they should be focused—like when driving. It’s also now a bit easier to scan the forest canopy for owls and other critters, as things aren’t so cluttered up there. By the time the green leaves change color they’ve already served their photosynthetic purpose for tree, right? So what’s the point? But the biggest bonus of this year’s dramatic leaf dropping has probably been the unveiling of the Winterberry. 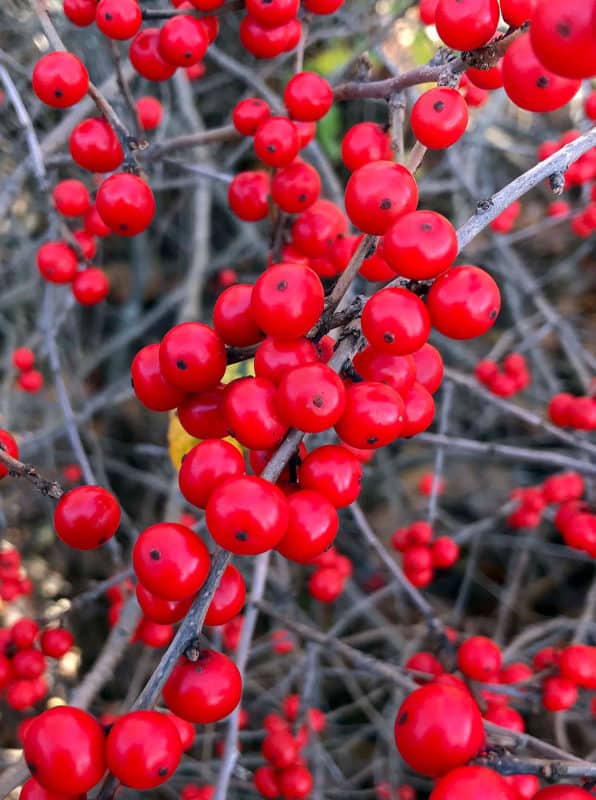 Local Winterberry shrubs (Ilex verticillate) have spent most of 2019 quietly growing and losing small (3-inch) leaves and blooming an impressive amount of tiny (quarter-inch) white flowers. When surrounding trees and shrubs lost their leaves this fall it became nearly impossible not to notice the loaded, red Winterberry shrubs lining Route 131 at stretches. It’s a “winterberry fall” —my favorite season to drive 131.

A shrub in the holly family (Aquifoliaceae), Winterberry is creatively named for its bright-red fruits and for the season in which said berries reveal themselves. And while the Winterberry flowers are pollinated each spring, it’s not every year the shrubs are covered and almost screaming with red berries. There are winterberries every fall, but not every fall is a “winterberry fall.” We like winterberry falls.

How many migrating songbirds and overwintering corvids will tap into this fruity resource, fueling wings and life in an effort to sustain the never-ending quest for nourishment? How many raccoons will plop themselves in the middle of a shrub and eat every red berry they can reach? How many Winterberry seeds will be deposited, fertilized, and eventually fruitful themselves thanks to the “help” of animals? How long will that red last before critters pick them clean? So many questions. It will be fun to get some answers, while driving safely of course. 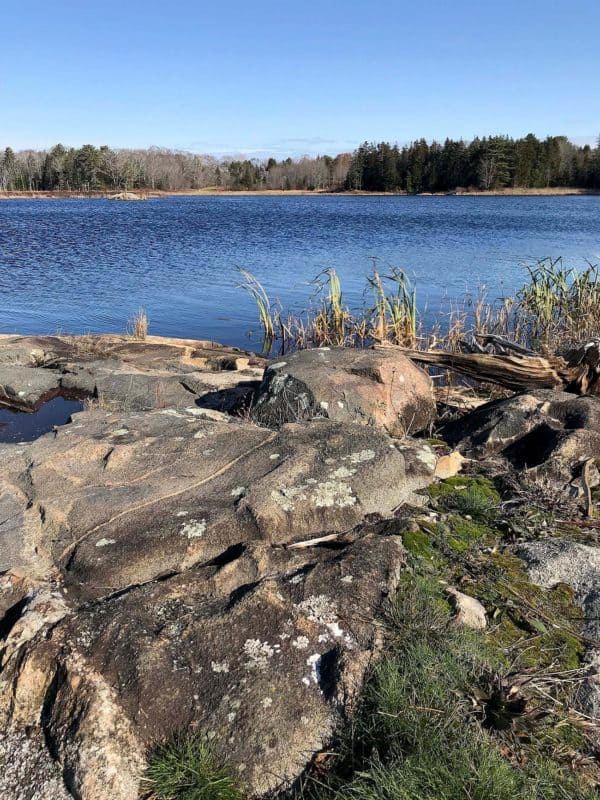 A view from the Les Hyde Nature Trail

Last Sunday I was on the Les Hyde Nature Trail by the library and school, sitting on a bench that overlooks the marsh. Winds were calm and the view was comforting as I sat there decked out in orange (a good habit for November). I was looking for anything perched but all I could see was the Winterberry shrubs across the water over by the beaver dam. Clear as day and all lit up red, from my perspective they were the story of the marsh as the sky started to darken at what felt like an obscenely early hour.

And it was the story until an oddly-shaped, non-duck critter was spotted swimming in the waters between the bench and the Winterberry. It was a swimming red fox with its fluffy tail pointed and almost entirely out of the water! What a sight. I’d never seen a fox swim before, and I was glad I had been looking in that direction when it doggy-paddled by. It looked like a small reddish boat being pulled backwards.

Before long (and before darkness) a muskrat swam through the scene as close to the bench as possible. With its thin, scaley tail mostly submerged, the muskrat offered a nice contrast in swimming form to the red fox, which had exited the water in full view (racy!). One view led to another, and pretty soon the story was the marsh itself. The focus and presentation kept changing, but the nature never stopped.