A significant, early summer rain can fill an entire forest with magical energy. Water (and lots of it!) combined with the longest days of the year have plants thriving, insects taking flight and forming the bottom of food chains, and (if things go right) forest floors littered with mushrooms.

Yes, these are the salad days for life in the woods. And with all that is to be seen, foraged, and appreciated, it feels like an appropriate time to give a shout out to one of our favorite (and we do play favorites) groups of “earthling things” too often overlooked—slime molds!

Slime molds are collectively known as Myxomycetes—derived from the Greek “myxo” meaning “slime” and “myketes” meaning “fungus.” Taxonomically speaking, that’s pretty much all that Myxomycologists (I may have just made up that word) agree on.

“Slimes get a tip of the hat for helping to lower levels of bacteria in the woods, which is something we all can appreciate!”

Some relegate slime molds to subkingdom status within the Fungus group. Others feel that, with their unique combination of traits, slime molds are worthy of their own Kingdom, bringing them on par with Animals, Plants, and Fungus alike (quite the compliment).

And yet others dare to insult slime molds by tossing them into the Protoctista Kingdom, a category universally viewed as the “trash Kingdom” (huge generalization). Not unlike the island of misfit toys, Protoctista is a collection of unrelated castoff life that humanoids can’t really figure out how to categorize.

Whatever else they are, they’re definitely slime molds—and they are totally worth checking out!

For most of their existence slime molds are somewhat protozoan-like. The Plasmodium stage, as it’s called, can be tricky to observe because the molds are living within decaying logs, stumps, and leaf litter. Depending on the amount of water in the immediate environment molds in this stage will move in either an Amoeba-like fashion (shout out to all the Amoeba lovers out there!) or with a tiny flagellae or tail.

As they move, they engulf and feast on bacteria, fungal spores, and anything else in their way. Slimes get a tip of the hat for helping to lower levels of bacteria in the woods, which is something we all can appreciate!

“This year seems to be a particularly good one (so far) for the Coral Slime.”

And then it all goes to spore 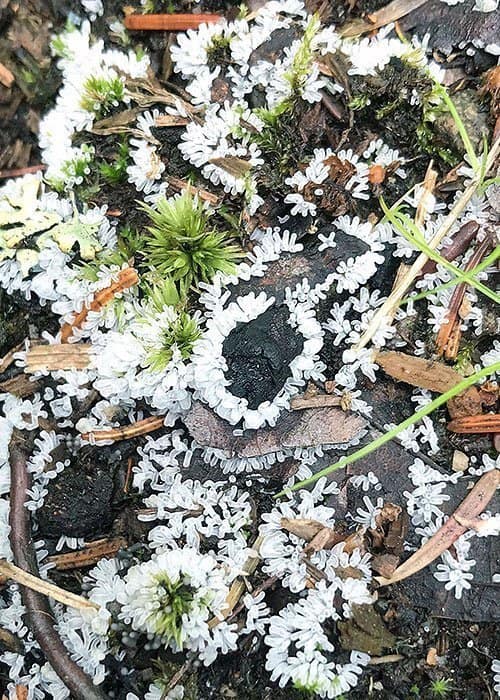 A good rain can inspire a slime to morph into their fruiting bodies. In this stage, the molds emerge from their home substrate and migrate—up to several feet—to an exposed location.

Get outside and slime them for yourself

Recently, a few of our favorite slime molds have been putting on trail-side shows in shady woods near my home in Tenants Harbor, like the Nature Trail by the school and the Town Forest trail off Kinney Woods Road. This year seems to be a particularly good one (so far) for the Coral Slime (Ceratiomyxa fruticulosa), with both of its column forms (variation fruticulosa) and its honeycomb form (var. poriodes) seen on logs along both trail systems.

Wolf’s milk slime (Lycogala epidendrum) patches are also numerous, with their pink candy dots turning brown and puffball like. Both species are found on local logs after rains summer through fall.

How about chocolate tube dipped in chocolate? 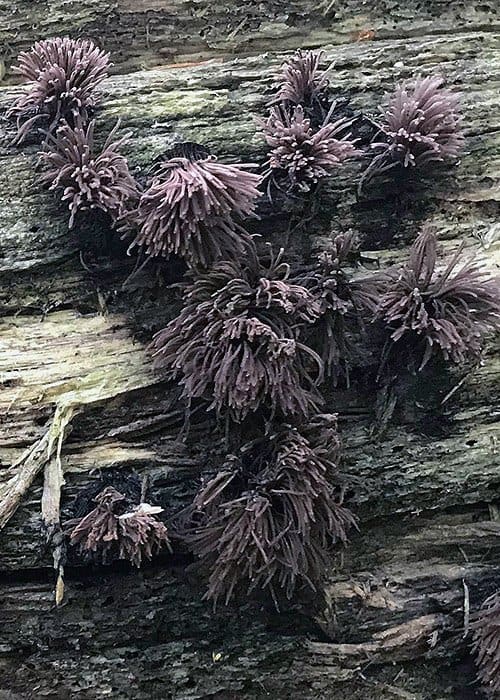 For a group of creatures that are not commonly eaten (maybe they taste good covered in chocolate?), slime mold common names are full of food references like chocolate tube, scrambled egg, pretzel, carnival candy, raspberry, and tapioca slimes. Chocolate tube (Stemonitis splendens (group)), scrambled egg (Fuligo septica), and tapioca (Brefeldia maxima) slimes seem to do particularly well in mid-coast Maine and may be spotted after rains along with Coral and Wolf’s Milk.

The presence of slime molds is a sign of healthy (and moist) woods. And while I can honestly say that I have never gone out specifically to look for slime molds, they are part of any summertime woods excursion. Who doesn’t love a good patch of slime mold?