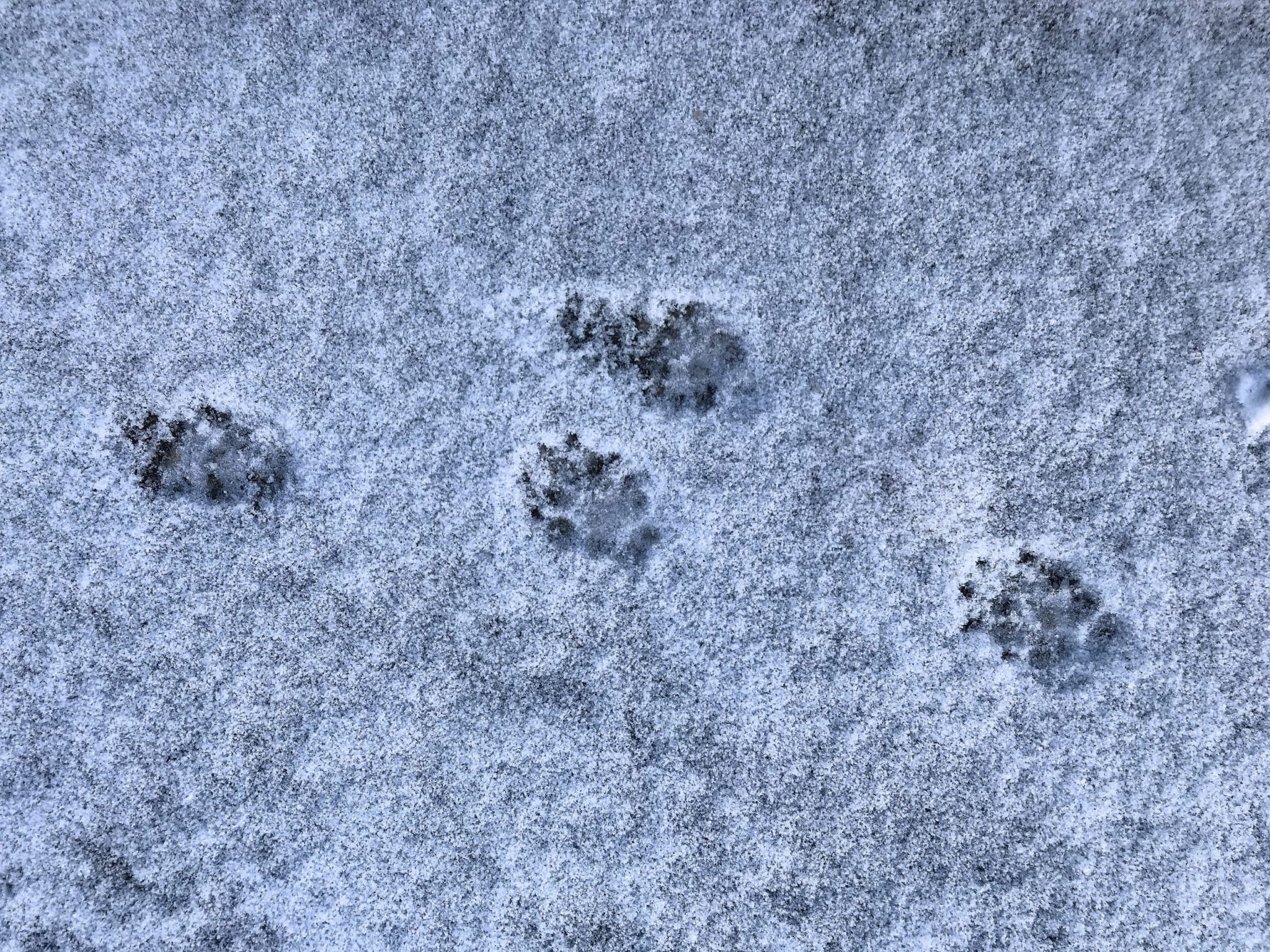 skunk tracks
Stories from the Coast >

Beyond the basic weirdness of publicly having posts labeled as “liked” (much less tallying likes), my least favorite thing about having an Instagram account (IG, for the hip kids reading this) is that every so often IG decides to live in the past.

I haven’t spent any time trying to decode patterns or rates, but every so often IG will show me pictures I’d posted on that particular date from a year or two prior. Seems innocent enough, but last week IG showed me all the snow and ice we had two Decembers ago.

While I’m always ready for winter to start, I am also fine with being patient and rolling with whatever comes weather-wise. We moved here for the warblers, but we live here for the winters. I distract myself until the snow and ice get here, but in reality I’m in a holding pattern for eight to nine (or so) months a year. I don’t need to be reminded of how great two winters ago was! I give that one a solid “dislike,” IG!

Last week the St. George peninsula did get some cold weather and a decent dusting of snow. Still a dusting, but, you know, the first half of December was breaking no records for snow accumulation and anyone capable of reading a ten-day forecast could see this was the only snow we were going to get in the near future. And that’s fine. It just meant that I had to be sure to take advantage of it.

Just a couple of days before, I had gotten some decent photos of the friendly neighborhood fisher (pekania pennanti) from a motion sensor trail camera I had put in the woods. I headed out hoping to possibly pick up its trail and check the ice on the marsh. (The social media history lesson made this a necessity.) 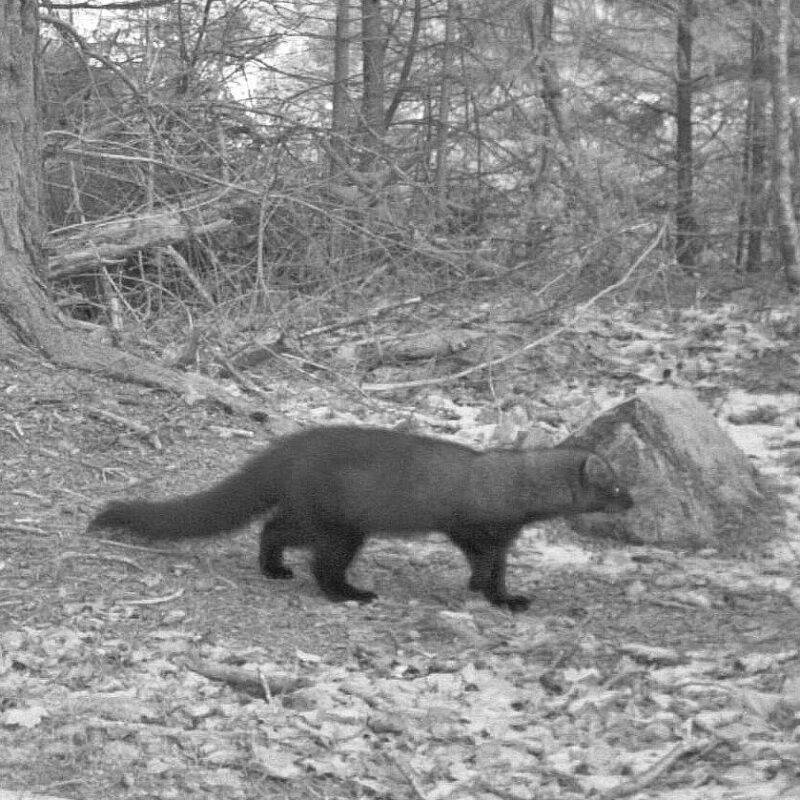 Of course, the tracking was great. Even before I got out of my driveway, I saw a striped skunk (mepheditis mepheditis) make its way around the clubhouse. Skunk activity in winter is not unheard of, but this was the first time I’d seen skunk tracks in snow! And with the mild conditions wrapping up 2020, I wouldn’t be surprised if many skunkers stay active late into the season.

With that skunky start, I cut through the woods and followed the “Kirk Trail” (KT) towards the marsh. A landmark on the KT is my low budget, kinda minimalist bridging over the only wet area on the trail. Two boards, two bases, six screws and oh how much better it is now than it was before. Good enough for me, and good enough for the fisher apparently.

That’s right—at some point after the mild dusting the fisher had walked across the bridge! My bridge! Can you think of anything cooler?

Well, nothing makes an animal trail in the snow cooler than evidence of a slip or two. And sure enough, I saw evidence that the fisher had jumped twice—once off a log onto the bridge, and a second time over a small branch that partially blocked the bridge. The fisher took both landings like an amateur, sliding like a Maine driver after the first snow of the year. Not only did the fisher use my bridge, but it slipped where I have never slipped. This was the greatest dusting ever. 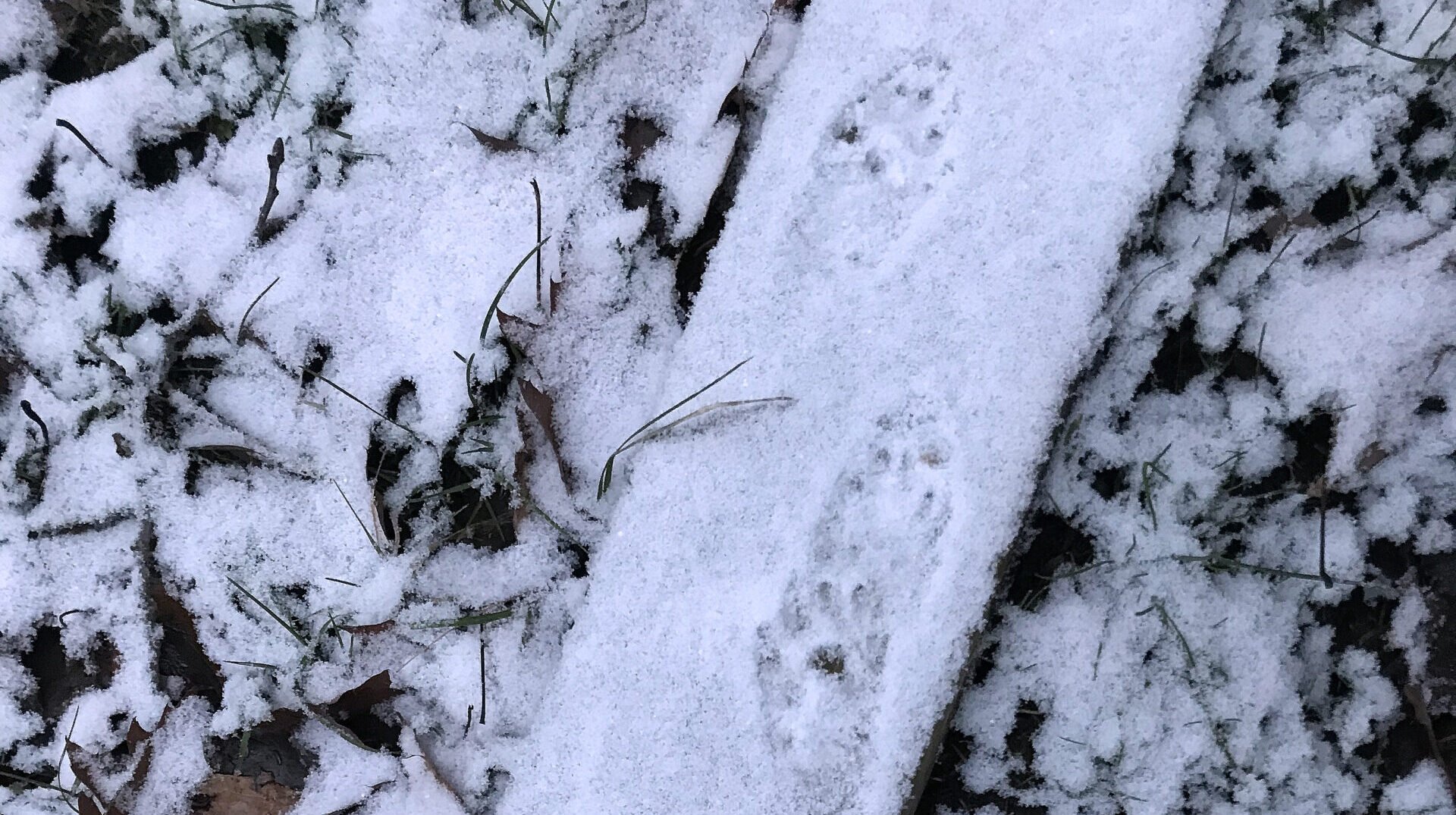 When I got to the marsh I was impressed with the wintery looking scene to be found. The ice and snow were deceiving, as only ice and snow can be. And while it was an inviting view, my survival instincts and common sense told me to take in the view from a distance.

At the edge of the woods I found a hopping trail of a small mammal. It looked like a classic small bound or trot with a long tail dragging down the middle. The tail trail made it appear more mouse-ish than vole-ish. (It’s always fun to see those small rodent trails. Unless they lead to your house—that is crossing the line!)

The trail made perfect sense except for lines running on either side of bounding tracks for a good 15-foot stretch. Was the critter wearing training skis? Was it on wheels? I am not familiar with rodent species that utilize either of these features.

It reminded me of a mink trail I followed years ago near Tip Toe Mountain on Vinalhaven. That double-lined mink trail was made up of many short bounds when compared to mink trails I’d followed over the years. (All over the island for that matter—there’s no shortage of mink out there.) In the end I concluded that the mink was carrying some sizable prey, probably a lobster or crab. (Shhh, don’t tell any fishermen.)

The lines along the mink trail were as persistent as the smaller set I found in the dusting by the marsh. But a rodent carrying prey made little sense… apart from a random cannibalistic event, rodents are essentially vegan. And even carrying nesting materials didn’t jive. I mean, why would a rodent carry materials that far and around in a loop? Thinking outside the rodent box, I said out loud, “Maybe it was a shrew?”

Shrew trails are not rare in St. George, but in my experience they are outnumbered significantly by similar-looking rodent trails. There are lots of similar species of shrews, and telling them apart from tracks is a little out of my range. Except for the northern short-tailed shrew (blarina brevicauda), which is one shrew species I have confirmed from shrew remains in barred owl pellets from MCHT’s Bamford Preserve.

Tracks from a shrew carrying prey

Here’s a fun fact: the northern short-tailed shrew is the largest shrew in North America, and is blessed with poison saliva that, “can paralyze or kill insects or subdue large prey such as mice. It also, “sometimes stores paralyzed prey alive for later consumption,” and, “attacks small mammals when insects are scarce.” (This is according to Fiona Reid, author of Mammals of North America.) Well, anyway, a northern short-tailed shrew with a mouthful of rodent prey would make sense given the trail I was seeing.

At that point I had to get home for a morning zoom marathon. When I got back outside at lunch, the dusting was gone. I was glad I had gotten out early in the day and nabbed an interesting tracking trifecta: s striped skunk in the driveway, a fisher on my bridges, and a probable northern short-tailed shrew with prey.

I also got to check the marsh ice, which was too thin to traverse, but thicker than expected! St. George got its snow and I got my lessons for the day. The ice will be here soon enough and we’ll take things from there. I’ll take what I can get in the meantime.

Whatever gets you out there!