Eastern view on Monhegan Island
Stories from the Coast >

Merlins, Monarchs, and More on Monhegan

This shouldn’t come as a surprise, but I rarely have a “vision” for the Nature Bummin’ column. Though, I write about what I see, so I guess there is some literal vision involved at times. (Makes sense if you don’t think about it too hard.)

I knew I was going to Monhegan Island a few weeks in advance, so, I admit, in this case I started envisioning what I might write about. I imagined a day full of interactions with hard-core bird watchers, interactions that would inspire a column rich with a heavily sarcastic take on their behavior.

You see, a combination of several factors—location being an important one—makes Monhegan a bird magnet, and thus a magnet for birders. During spring and fall migrations, many a bird observer heads to the island for the day or for an extended stay (two weeks plus) because the birds can be so “good” out there.

My good friend Mike and I have been planning a trip to Monhegan ever since my family moved to St. George for that exact reason: the birds. But once I arrived on the island, in early September, it didn’t take long to recognize that I may need corrective lenses when “envisioning”… there were hardly any birders out there!

We spotted a few strolling around, easily identified with their binos, books, cameras, and funky vests and hats. There was a single, organized “birdery” (group of birders) that moved in an amoeba-like fashion so that the entire group might catch a glimpse of every tweeter.

But the birdery was from Midcoast Audubon, so I actually knew (and kinda like) some of the folks, and the individual, floating birders seemed pleasant even with their distracting vests on. I would have to take a different tack with the column, that much I could see!

Here’s the other issue with my original vision: bird wise, it was incredibly quiet on the island. There seemed to be more birders than birds. Mike and I strolled through the town and quickly found ourselves heading to the woods to search for mushrooms and views.

That day Monarch butterflies, unlike birds, were plentiful on the island. They have been spotted all over the Midcoast this fall, and that day on Monhegan was no different. 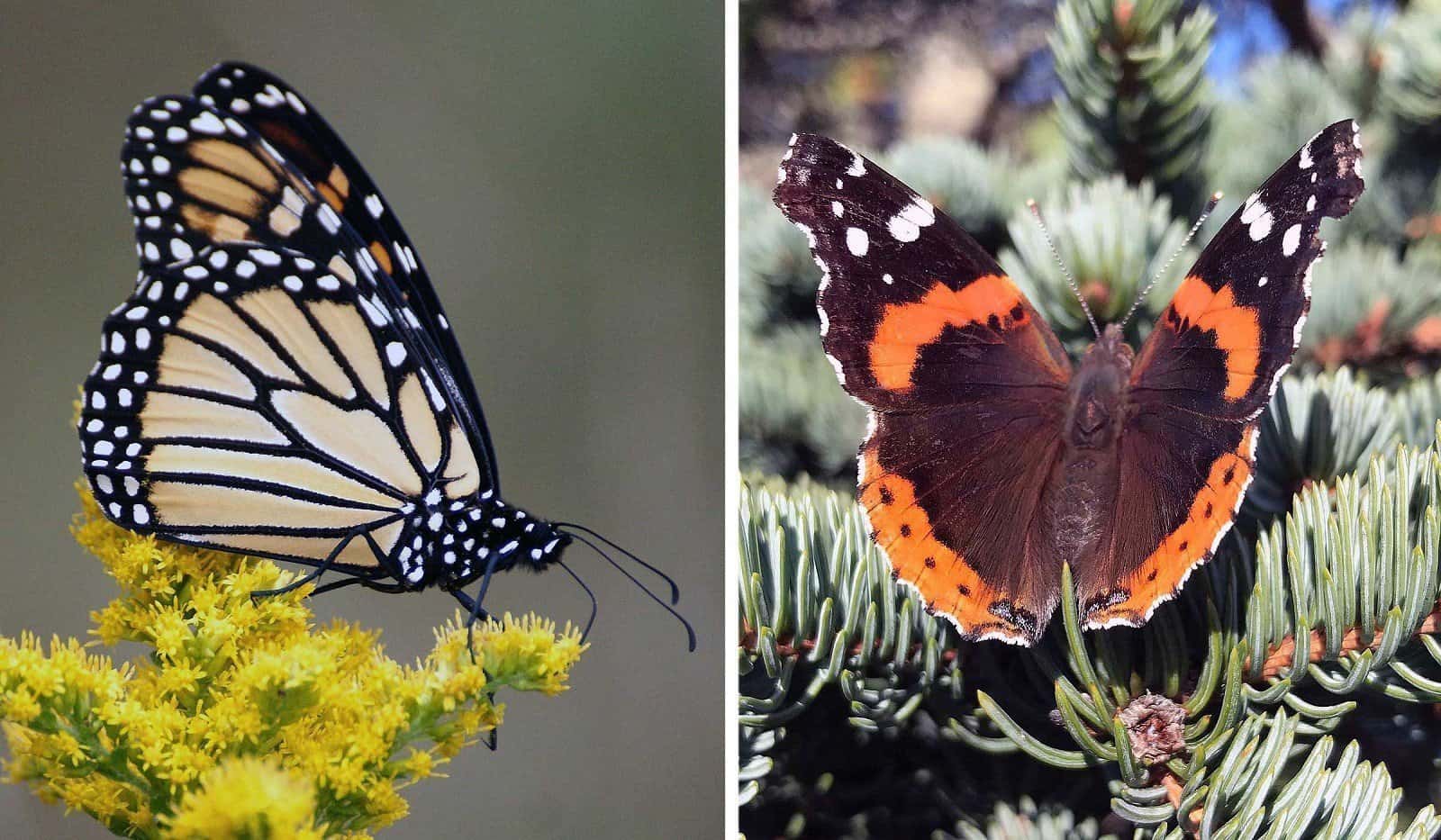 Kirk snaps photos of a monarch and red admiral

From the eastern clifftops you could watch the Monarchs coming in from over the ocean, or wave goodbye to them as they headed over to Manana and beyond. Migration is so cool, and Monarch migration is so crazy—it’s the king!

We saw a couple hundred that particular Saturday, and several other butterfly species and still heard the you-should-have-been-here-a-few-days-ago stories. Nothing is cooler than butterfly stories.

No shortage of raptors

There was also no shortage of raptors that day, with falcons, accipiters, and the random bald eagle making appearances. A steady flow of Merlin falcons to the island from the east provided quick sightings as they zoomed by, flying low on sneak attacks (classic Merlin style).

Merlins feed on birds (and dragonflies, etc.), and their hunting ways combined with the random Peregrine falcon flyby undoubtedly added some noise to the songbird silence. Sharp-shinned Hawks were the accipiter of the day (several were sighted, which is as prestigious an honor as it sounds). With so many aerial, avian predators, it’s no surprise songbirds opted to keep it quiet for the most part this day. The airborne action was fast and furious. 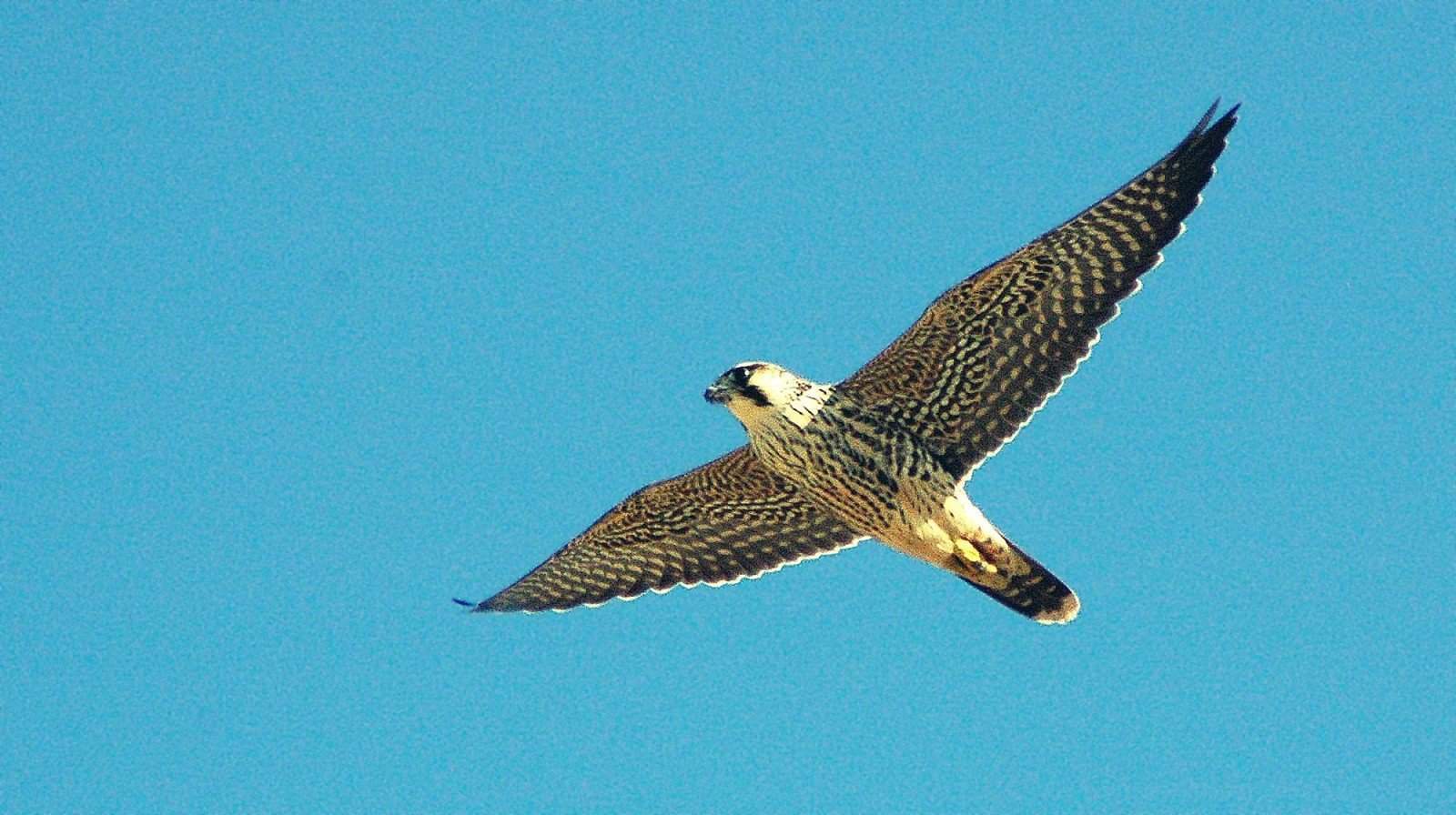 We crossed paths with the Midcoast Audubon group about mid-day, and you can tell how the bird watching is going when a birdery only talks about a dragonfly situation they observed. Don Reimer, one of my favorite people, was leading the field trip and gave us the scoop on a large gathering of large dragonflies over the Lobster Cove trail. Don noted that the odnonates looked to be hunting “flying ants” that were emerging in one spot along the trail.

His description matched the reality we came upon. Comet Darners (Anax longipes)–large, green headed and red abdomened dragonflies–numbered in the dozens, hunting what appeared to be Eastern Subterranean Termite (Reticulitermes flavipes) with several Darners clearly flying with termite wings sticking out of their mouths. We watched for a bit, but when we returned a half hour later the scene was all quiet, not a darner to be seen. I think Don’s interpretation was right, which is usually the case.

We tried one last trail before heading to the boat, and crossed paths with a small, mixed species songbird flock. A handful of Warblers, Baltimore Oriole and a Olive-sided Flycatcher rounded out the day, and we could officially say we saw some songbirds on Monhegan.

The day had already been a success and the late wave of birds just made things “more successfuller.” There is nothing “quiet” about a great raptor, butterfly, and dragonfly day on Monhegan Island. Except auditorily of course.