Jeff hiking with his son Anthony
Stories from the Coast >

Maine Coast Heritage Trust formed in 1970 as one of Maine’s first land trusts. Collaborative from the start, MCHT made it part of its mission to support the formation and sustainability of other Maine land trusts.

MCHT now runs the Maine Land Trust Program, which is dedicated to strengthening other Maine land trusts and supporting land conservation across the state. Jeff Romano, MCHT’s Public Policy Manager, is key to this effort, along with his colleagues Warren Whitney, Maine Land Trust Program Director, and Donna Bissett, the program’s Coordinator.

Jeff grew up in New Hampshire, where political talk and the great outdoors are pervasive—basically the ideal breeding ground for a future land conservation public policy advocate.

He studied Politics at Saint Anselm College and received his law degree from Vermont Law School, while climbing the White and Green Mountains and traversing the country in search of outdoor adventure whenever possible.

He still hikes, often with his son Anthony (he’s even authored several hiking guides to New England!) but most days of the work week you’ll find him scaling the steps at the State House in Augusta working on behalf of land conservation and Maine’s land trust community.

This is a guy who, admittedly, likes “how the sausage is made”—that is, he likes the messy work of lawmaking (he’s also obsessed with all things Italian, including actual sausage). And in recent years, he’s been busy.

Below he answers some questions about his work for MCHT.

Decisions made in Augusta and Washington DC can have a significant impact on MCHT’s work, and the work of land trusts throughout Maine. While conservation organizations run mostly on individual donors and local community support, we must also maintain partnerships with state and federal agencies, support government grant programs, and defend sound tax policies, among other things.

Land conservation is key to the health of Maine’s communities—whether you’re talking about preserving Maine’s outdoor heritage and natural resource economy or Maine’s native plants and animals. It’s all connected. My job is to make that case to legislators, and make sure they’re supporting legislation that benefits this work and opposing bills that would be harmful.

Well, every day is different. I’m often at the state house having conversations with legislators and other lobbyists to discuss bills being considered. Some days I need to attend a public hearing before a legislative committee and provide Maine Coast Heritage Trust’s perspective on the issue. But a lot of my time is spent at the office or in meetings, strategizing, writing, working with partners, and preparing for the next issue that arises. My job is dynamic, that’s what I like about it.

What’s your favorite part of the job?

I like the strategizing part. I like thinking about what will work and what won’t, who we need on our side, what the opposition might say and how we will counter that.

“Land conservation is key to the health of Maine’s communities—whether you’re talking about preserving Maine’s outdoor heritage and natural resource economy or Maine’s native plants and animals. It’s all connected.”

Some policymakers are critical of land trusts and land conservation. How do you approach your job in the face of this opposition?

In recent years, MCHT and the land trust community have been forced to play some defense and we have been able to successfully prevent a lot of bad public policy. Our strategy throughout has been to work closely with our key allies, and disperse accurate information to Maine’s legislators, the public, and the press at every opportunity.

This strategy was critical in 2017, when concerns about land trusts and property taxes were at the center of the state’s government shutdown. In response, policymakers added language to the budget to look in to the work of land trusts. We used this as an opportunity to collect additional information from land trusts—information like the amount of land open for hunting, the number of trails open to the public, implications for the tourist economy, and more.

Some critics like to state that land trusts don’t pay property taxes; yet in reality, we found that 94.5% of land trust conserved lands in Maine are on the tax rolls. We packaged all of this together in a report, Land Trust Works for Maine.

Not only did the report make a compelling case for the public value of conserved lands, it answered many of the concerns being raised. In the end, bills unfairly targeting land trusts failed to achieve legislative support.

Some politicians have also spoken out against the Land for Maine’s Future (LMF) program. Can you tell us about that program?

Although they exist, politicians critical of the Land for Maine’s Future Program are in the minority. LMF was founded in 1987 when a strong bipartisan coalition of leaders in government and the private sector realized that they had to act boldly and quickly to conserve special places and protect public access to Maine’s outdoors. They understood how critical land conservation is to the state’s economy and our way of life.

Over the next several decades, Maine voters have voted six times to allocate more than one $130 million dollars for land conservation. Now we have places like Beech Hill Preserve in Rockport, the Cutler Coast in Washington County, Mount Kineo State Park in the heart of Moosehead Lake, and the list goes on.

LMF has supported the conservation of more than 600,000 acres in the state, including more than ten MCHT preserves—from The Goslings in Casco Bay to Bog Brook Cove along the Bold Coast.

“In recent years, MCHT and the land trust community have been forced to play some defense and we have been able to successfully prevent a lot of bad public policy.”

Where does LMF stand today?

The program has not received much funding over the past decade and has been subject to political gamesmanship, but my colleagues and I have done our best to raise public awareness of LMF and to defend the program’s integrity.

Two years ago, we created a website featuring LMF-conserved places open to the public, got the word out about LMF on social media, and encouraged folks to enjoy the more than 150 destinations now available to the public thanks to the program. The public response has been great.

We continued raising public awareness of Land for Maine’s Future and the work of the state’s land trust community.

In the summer of 2018, we joined with L.L.Bean to release the Passport to Maine’s Outdoors. This brochure and accompanying website featured thirty-six outdoor destinations in Maine, with information on hundreds more.

Most of the outdoor areas featured had been conserved by LMF, land trusts, or by both working together. We distributed more than 2,000 brochures through the mail, at L.L.Bean’s freeport store, and with the help of partners.

Last, but definitely not least, we joined forces with The Nature Conservancy and the Sportsman’s Alliance of Maine to the form the Conservation Task Force—a diverse group of stakeholders who came together to offer a set of recommendations to guide land conservation efforts into the next decade.

This effort was co-chaired by MCHT’s President Tim Glidden and David Trahan, Executive Director of the Sportsman’s Alliance of Maine, with people from healthcare, economic development, educators, and so many other sectors taking part.

The Conservation Task Force’s report is now out! We’ve been sharing the report with legislators and Maine’s new Governor, Janet Mills. One of the key recommendations is to put money towards deferred maintenance of conserved lands like our State Parks. Many places see lots of public use and are sorely in need of resources and attention.

The report also includes a recommendation to revive the Land for Maine’s Future program, with a robust 5-year $75 million bond.

The state has done little to support conservation efforts over the last decade, and this would represent a huge step forward. Of course, it will take a lot of work to move this through. With the help of the Task Force Report, we have received some early support, with a bipartisan group of 105 legislators signing onto a bill to fund State Parks and LMF.

What’s something you’ve learned during your time in Augusta?

While it is important to advocate for your side, it is critical to not burn bridges. Often, those you find on the opposite side of one issue can be your strongest allies on the next.

What’s been key to your success?

I do a pretty good job of understanding lots of different perspectives. I try not to judge people’s motivations. I can understand why someone has a different view on land conservation. We all have different constituencies to represent, and each has a legitimate interest. I’m always working to make conservation something others value, rather than simply having them see it through my eyes. 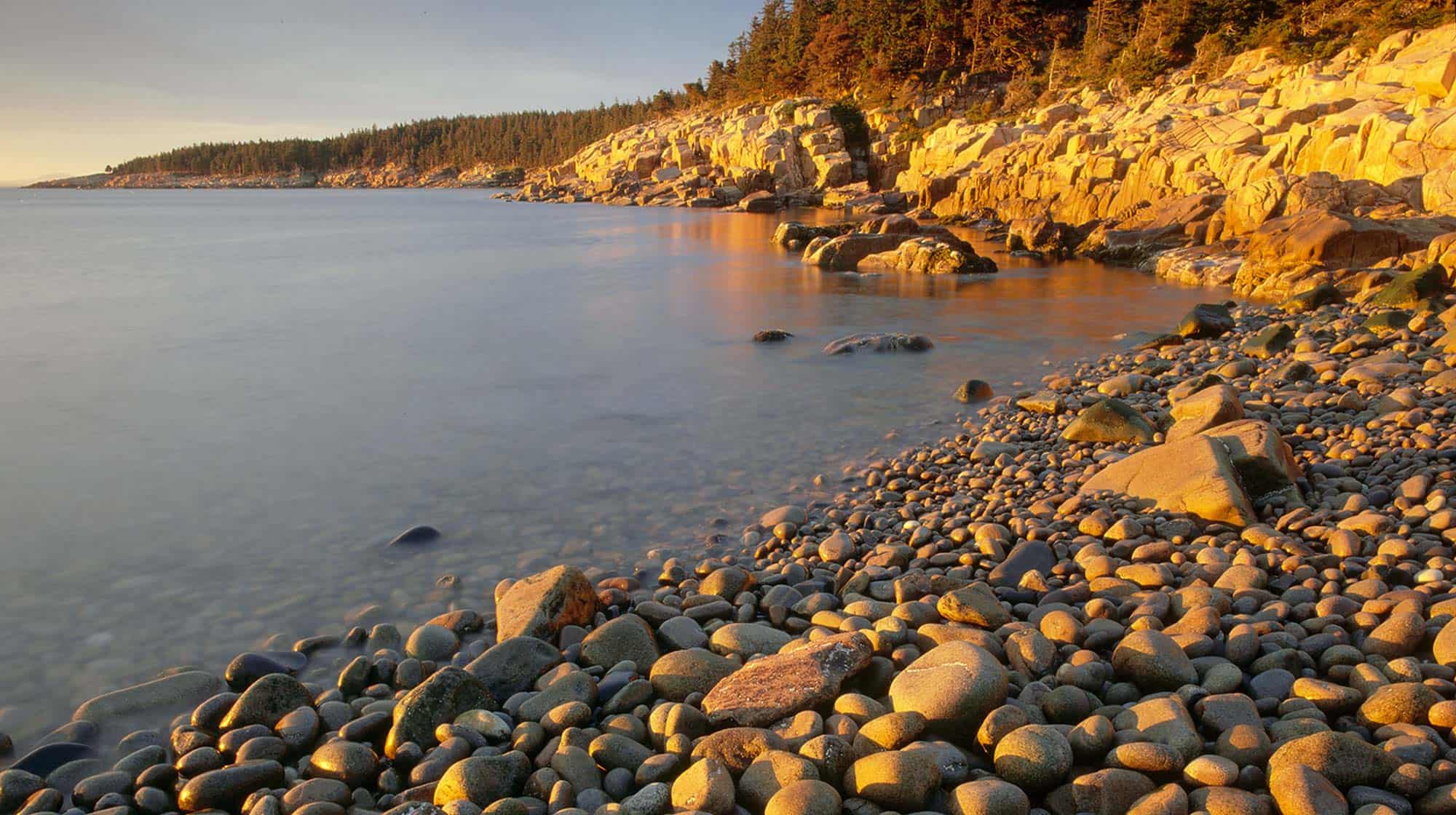 While there are many great candidates to choose from, my favorite is the one I have spent the most time exploring—our Frenchboro Preserve. A trip to Frenchboro begins and ends on a scenic 45-minute ferry ride where seals, eagles, and porpoises are often spotted.

Upon arriving in Lunt’s Harbor, a short stroll through the village quickly leads to the preserve’s network of trails and the opportunity to explore every quiet corner of the scenic island – each bluff, beach, and hidden cove.

There are few coastal hikes in Maine that offer the scenery and solitude one enjoys along the trails of Frenchboro. I can’t wait to get out there again this year.