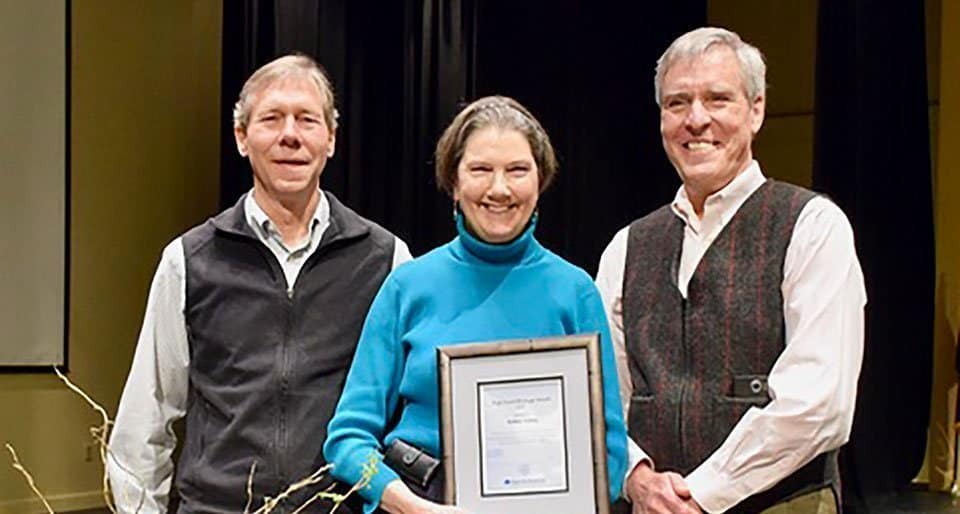 “Barbara Vickery set the gold standard for using science to inform conservation work in Maine,” remarked MCHT President Tim Glidden at the ceremony. “Her passion and dedication—in particular to forest conservation—have had an incredibly positive impact on our state’s natural landscapes and local economies. Her inclusive approach with businesses, government, and other community stakeholders assure that her many conservation project successes will stand the test of time.”

Barbara, who recently retired after a distinguished 33-year career at the Maine chapter of the Nature Conservancy (holding positions as Director of Stewardship and Director of Conservation Programs), played an instrumental role in several high-profile conservation projects and initiatives all throughout Maine.

As a critical driver for developing Maine’s Beginning With Habitat program, Barbara ensured that science is an integral part of the state’s conservation decisions made by land trusts and federal, state, and local agencies. Barbara was also a key behind-the-scenes leader of the Maine Forest Biodiversity Project, which resulted in better understanding and cooperative relationships among Maine’s commercial forest land owners, state managers, and fisheries and wildlife biologists. The project helped lay the groundwork for the creation of Maine’s Ecological Reserve system which protects important ecosystems throughout the state.

Barbara’s involvement in land conservation spans the entire range of Maine, from Mt. Agamenticus in the south, to the St. John River in the north, to Cobscook Bay in the east and the Saco River in the west. All told, the projects she was involved with throughout her career totaled more than 1 million acres of land conservation in Maine.

In honoring past President Jay Espy with this award, the board of directors at MCHT created a fund that awards $5,000 per year, with the winner able to direct the funds to the conservation charity of their choice. Barbara has chosen to allocate her funds to the Kennebec Estuary Land Trust’s environmental education program.

In explaining her choice of fund recipient, Barbara emphasized the importance of connecting young people to the natural world through experiences with those who are passionate about nature. “The Kennebec Estuary Land Trust is doing awesome environmental education work and I know the kids are getting their hands and feet muddy! I hope the kids will feel connected to the estuary that is their home.”